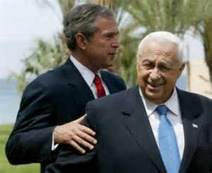 The US president, George Bush, today asked the Israeli prime minister to release Yasser Arafat from his confinement in Ramallah and let him attend an Arab League meeting in Lebanon, the White House said today."The president believes that Mr Sharon and the Israeli government should give serious consideration to allowing Yasser Arafat to attend," said Ari Fleischer, a White House spokesman.

"The president wants to see the meeting in Beirut focus on ideas for peace."

Crown Prince Abdullah of Saudi Arabia is due to present a peace deal at the meeting, but has said that he will not table the proposals in the absence of the Palestinian leader.

The White House said that Mr Bush "would very much like to see come out of Beirut a recognition by Arab leaders that is consistent with Abdullah's initiative that recognises Israel's right to exist and secure borders."

America has criticised the Palestinian leader for not doing enough to rein in militants engaged in bloody conflict with the Israeli army.

The violence continues to rage, despite US brokered peace talks between Israelis and Palestinians. Yesterday, Israeli commandos backed by helicopters tracked and killed four militants who had slipped across the normally quiet border with Jordan. Seven people were killed in incidents elsewhere.

America thinks that Mr Arafat can and should control militants who have made it clear they have no intention of halting their attacks on Israelis unless Israeli settlers withdraw from the West Bank and Gaza.

The US vice-president, Dick Cheney, has said he is prepared to fly to Egypt to meet Mr Arafat if he agrees to a truce. However, he said yesterday that the Palestinian leader had not done enough to warrant such a meeting.

None of the participants have reported great progress in talks that have been held sporadically since last week.

Mr Arafat has been held under virtual house arrest by the Israeli army since December, in retaliation for an upsurge in attacks against Israelis.
Weekly Report on Israeli Human Rights Violations in the Occupied Palestinian Territories (20 March 2002)
PCHR Investigation: Israel Most Likely Responsible for Death of 5 Palestinian Civilians in Explosion

According to PCHR’s documentation, 24 Palestinians, including 21 civilians, were killed and dozens were wounded by Israeli occupation forces. Five of the victims were children under 18.

A widow, three of her children, and her nephew riding together in a donkey cart were killed.

A preliminary PCHR investigation has found that Israeli occupying forces were most likely responsible for the explosion. Israeli forces had withdrawn from positions very close to the site of the explosion at approximately 0600 that day and remained nearby at all times, and even fired at bystanders who tried to assist the victims in the immediate aftermath of the explosion. Such a conclusion is not lacking in historical precedent.

On 22 November 2001, five Palestinian schoolboys from the same family were killed by an exploding device on a narrow dirt path while walking to school outside Khan Yunis, in the southern Gaza. Strip. After an initial denial, Israeli occupying forces later admitted responsibility for the incident, saying that they had placed the bomb to ambush Palestinian gunmen.

In a continuation of the policy of assassination formally adopted by the Israeli government, on Thursday, 14 March, Israeli occupation forces assassinated two Palestinians in ‘Anabta village near Tulkarm.

This week, Israeli forces invaded areas under the control of the Palestinian National Authority (PNA) in the Gaza Strip under the cover of intensive shelling. They demolished 25 Palestinian houses and razed large areas of Palestinian agricultural land.

They also maintained their control over some Palestinian National Authority controlled areas, including Ramallah, where they killed five Palestinians.

In violation of international humanitarian law, especially the Fourth Geneva Convention of 1949, Israeli occupation forces attacked Palestinian medical personnel and denied their access to the wounded. They also shelled a hospital in Bethlehem.

This week, two Palestinian civilians were wounded by live bullets fired by Jewish settlers in the West Bank.

Israeli forces tightened the siege imposed on the OPT. Israeli forces separated between Palestinian areas transforming them into Bantustans.

Five Palestinian Civilians Killed in an Explosion At approximately 16:00 on Friday, 15 March, a powerful explosion occurred on a dirt path in an agricultural area 300m from the eastern border of the Gaza strip, near the Wadi (valley) Gaza, outside al-Bureij refugee camp. A widow, three of her children, and her nephew riding together in a donkey cart were killed:

A bystander, Abdullah Samih Shehadeh Abu Khusa, 14, was injured in the ears and legs.

The victims were en route to a plot of agricultural land owned by Ms. Al-Awawdeh several hundred meters away, near the eastern border of the Gaza strip. The explosion left a crater approximately 6m wide and 3m deep. When local residents rushed to the scene to provide assistance approximately five minutes after the explosion, they came under fire from an Israeli tank stationed nearby and were forced to flee the area. The bodies were not collected until the next morning, after coordination with Israeli occupying forces. Unusually, no remains or shrapnel of the explosive device were found.

PCHR is deeply concerned that Israeli occupying forces may have removed, altered, or destroyed evidence at the scene in the aftermath of the explosion. Soon after the killing of Mohammed al-Durrah on 30 September 2000, an incident which was televised worldwide, Israeli forces demolished the wall against which he was huddled when he was shot, removing a crucial source of evidence.

Israeli military sources claimed that Palestinians were responsible for the explosion. Based on observations at the scene and eyewitness interviews, PCHR has concluded that this is highly unlikely, as the site would be a far from ideal place to ambush Israeli occupying forces. The path is not used by Israeli forces, and is too narrow for jeeps and tanks. Moreover, the use of roadside bombs in Palestinian military operations in the Occupied Palestinian Territories has historically involved detonation either by wire or remote control rather than booby traps.

Additional circumstantial evidence strongly suggests that Israeli occupying forces were responsible for the explosion. Israeli forces had withdrawn from positions very close to the site of the explosion at approximately 06:00 that day and remained nearby at all times, as the shooting encountered by bystanders in the aftermath of the explosion clearly demonstrates. This would also have deprived Palestinians the opportunity provided by cover of darkness to plant a bomb in the area. The explosion took place near an outpost of the Palestinian National Security Force that Israeli troops had seized earlier and then abandoned during their withdrawal, suggesting that Israeli forces may have planted a booby-trapped explosive to ambush returning Palestinian National Authority (PNA) security personnel, whom Israel routinely targets, or Palestinian gunmen on their way to attacking an Israeli military outpost on the border of the Gaza strip.

Such a conclusion is not lacking in historical precedent. On 22 November 2001, five Palestinian schoolboys from the same family were killed by an exploding device on a narrow dirt path while walking to school outside Khan Yunis, in the southern Gaza strip. After an initial denial, Israeli occupying forces later admitted responsibility for the incident, saying that they had placed the bomb to ambush Palestinian gunmen. The results of the Israeli army’s internal investigation remain secret; according to an Israeli military spokesman, unspecified disciplinary measures were taken against some army personnel in connection with the incident.

A number of Palestinians have died in unexplained explosions during the al-Aqsa Intifada. For example, on 25 April 2001, four Palestinian civilians were killed when a mysterious object they were inspecting on the border between the Gaza strip and Egypt exploded. Responsibility for this incident and similar ones remains unclear, although circumstantial evidence in a number of these cases also indicates Israeli responsibility.
Powered by