19 oct 2014
Soldiers detain developmentally disabled child, Hebron, Oct. 2014
29 sept 2014
VIDEO: Violence and Detention of Children in Hebron
dragged him to the checkpoint, and detained him for 20 minutes.

In a separate incident close by, nine-year-old Razain was walking near another local school when Israeli forces threw a stun grenade close to her legs. Shrapnel from the stun grenade injured her as it exploded in close proximity, stated Razain’s grandfather to ISM volunteers.

This morning at the Salaymeh checkpoint, Israeli forces fired three tear gas grenades and one stun grenade at schoolchildren.

An ISM activist present stated, “Around three young boys ran towards the checkpoint and threw stones towards the armed Israeli soldiers. They then fired a tear gas grenade towards the the children walking to school, forcing them to run through clouds of gas. This continued for around 40 minutes, with several more children throwing stones and two more tear gas grenades being fired. At one point the soldiers entered through the checkpoint towards the schools and threw one stun grenade. Many of the children were very afraid, it’s clearly no way to begin a day of education. I can’t imagine how difficult it must be to concentrate and learn when your day begins with military violence.”
24 aug 2014
VIDEO: Israeli Forces Arrest Two Children and Fire 29 Rounds of Tear Gas at Schoolchildren
years old, in front of them attempting to get to school. Later on the Israeli forces threw stun grenades and brutally grabbed and arrested two young Palestinian boys between the ages of 14 and 15 years old. One of the boys whilst in a headlock and handcuffed was punched several times in the side. ISM activists ran up to ask the boys their names and correct ages but the Israeli forces were very hostile. They were both forced through the turnstiles and were kept at the checkpoint for a few minutes before Israeli forces marched them to the police station near the Ibrahimi mosque.
9 aug 2014
Seven Jerusalemites arrested during clashes

The information center of Wadi al-Hilweh said that an Israeli undercover unit arrested two children from Silwan and took them to a police station in the town, while clashes broke out in the area.

In al-Tur neighborhood, the IOF arrested four Jerusalemite youths, while they stormed al-Sawwanna neighborhood in a failed attempt to carry out some arrests.

The clashes broke out when Israeli forces suppressed a march in protest at the Israeli aggression on Gaza. Dozens of protesters suffered from inhaling tear gas during the confrontations.

The IOF also arrested a 13-year-old boy as he was en route to his grandfather’s home in al-Tur town.

The boy was brutally attacked and severely beaten during his arrest for allegedly stoning Israeli soldiers.

The boy was then released on condition of not filing a lawsuit against the soldiers who attacked him, his father said
5 july 2014
Report: Israel has detained 3,000 Palestinian children since 2010

Israeli forces arrested nearly 3,000 Palestinian children from the beginning of 2010 to mid-2014, the majority of them between the ages of 12 and 15 years old, Addustour newspaper published a new report saying yesterday.

The Euro-Mid Observer for Human Rights' report documented dozens of video recorded testimonies of children arrested during the first months of 2014, pointing out that 75 per cent of the detained children are subjected to physical torture and 25 per cent faced military trials.

The report revealed details of the children's suffering, starting with the arbitrary arrests which are in violation of the Convention on the Rights of the Child to which Israel ratified in 1991. The report listed a series of violations practiced by Israeli forces against children during the arrest process itself, where the Israeli forces raid the children's homes after midnight as they sleep using actions that terrorise the child and his family, without clear justification or an actual security need.

During the "isolation", the report points out, the investigating authorities place the child alone in "narrow cells" and do not allow anyone to meet him, including in some cases his lawyer.

The organisation called on international bodies and human rights organisations to stop Israeli violations against Palestinian children and stressed on the need for Israeli authorities to hold the children's trials in the occupied Palestinian territories to give their families and lawyers the opportunity to meet them and accompany them during the interrogations and to ensure that they are not subjected to torture, and to provide them with fair compensation in case it is demonstrated that their detention was arbitrary.

It called on all parties who have signed the Geneva Convention and related international institutions to "practice the largest possible pressure against Israel, including denying it from financial agreements and aid to immediately stop its human rights violations".

Over the past three weeks, the Israeli army raid more than 1,500 Palestinian homes and places of business and arrested more than 600 Palestinians following the apparent disappearance of three settlers in Hebron.
4 july 2014
15-year Old Cousin of Murdered Teen Beaten by Police in Shu'fat 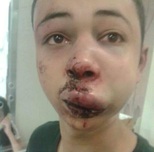 A Palestinian teenager identified by local sources as the cousin of the 16-year-old who was murdered on Wednesday was beaten and abducted by Israeli police on Thursday, and was refused medical treatment for his broken nose and other injuries while in custody.

The Palestinian Red Crescent Society has reported that over 170 Palestinians have been injured since Monday, when the bodies of three Israeli teenagers who had gone missing two weeks earlier were found.

15-year old Tariq was allegedly participating in one of several protests that took place in Shu'fat and nearby areas after Muhammad Abu Khdeir, 16, was abducted by Israelis, according to eyewitnesses, and later found burned to death on Wednesday.

Hundreds of Palestinians took part in the protests, which were met with tear gas, rubber-coated steel bullets and concussion grenades. At least three incidents have been reported of Israeli police and military using live ammunition against the demonstrators. Of the 170 injured since Monday, at least six are journalists.

Since his death Wednesday, the family of Muhammed Abu Khdeir has faced interrogations, DNA tests and a misinformation campaign started by the Israeli police to claim, based on no evidence, that the boy was killed in a family dispute -- in addition to the Israeli police refusing to look at surveillance video showing the assailants, which would normally be a major part of an investigation.

The attack on the 15-year-old appears to be the latest affront to a family that is mourning the brutal death of a child. Tariq is a Palestinian-American who was staying with family in Jerusalem when he was beaten and abducted by Israeli police. He full extent of his injuries is still unknown.
Locals: Settlers try to kidnap 7-year-old in Beit Hanina

Witnesses told Ma'an that four settlers from Pisgat Zeev tried to kidnap Muhammad Ali al-Kiswani while he was playing in the neighborhood late Thursday after breaking the Ramadan fast.

Children in the area alerted family members, who thwarted the attack, according to witnesses.

An Israeli police spokesman could not be reached for comment.

On Tuesday, Muhammad Abu Khdeir, 16, was kidnapped from the Shufat neighborhood and later found dead in a Jerusalem forest. His body was found badly burnt.

The Geneva-Based Euro-Mid Observer for Human Rights documented the annual Israeli arrest of about 3,000 Palestinian children, mostly aged between 12 and 15 years old, calling on the international community to act against such “a flagrant breach to human rights treaties.” At a time when West Bankers have been permanent targets of Israeli terror acts, home raids and abduction campaigns, scores of Palestinian children have been kidnapped in the early months of 2014, corroborated by dozens of videotaped sworn affidavits, the EMHRN said in a report on the Israeli violations of Palestinian children’s rights.

75% of the incarcerated minors have been subjected to physical torture while 25% are brought before Israeli military courts, the report pointed out.

According to the Euro-Mid Legal Counsel Ihsan Adel, the Israeli police and army have been launching overnight raids on Palestinian homes and capturing Palestinian minors without updating their families about the charges.

Countless cases of random kidnaps, torture testimonies, and violations of the convention of Children’s Rights, signed by Israel in 1991, featured in the report.

The Euro-Mid kept record of numerous occasions during which Palestinian minors have been kidnapped in Israeli overnight home-raids, generating a state of unparalleled anxiety and panic among the children and their families with no legitimate reasons.

Blowing up Palestinians’ home gates, snatching a child from his/her own bed, resorting to psycho-physical torture, and locking minors up in solitary cells, have all been Israeli terror tactics to agonize Palestinian children, both in the interrogation and pre-interrogation phases.

The Israeli occupation authorities have not only been incarcerating Palestinian children in solitary cells that often cover a very narrow area but also denying them their right and need to be visited by their lawyers and parents, even during the court hearings.

It is almost impossible for the child to stand against the dark-gray-colored cell walls, covered with protrusions from all sides.

Adviser Ihsan Adel detected a genuine compatibility between the Euro-Mid report and the findings of a UNICEF survey conducted in 2013 warning that: “The abuse of Palestinian children under the Israeli military detention system is a large-scale, systematic, and pre-planned tactic.”

“Neither the spontaneity of childhood nor children’s right to live in safety seem to really matter for the Israeli occupation,” the report concluded, calling on the international and human rights institutions to immediately step in so as to halt such unspeakable Israeli violations of Palestinian children’s rights.

“No human being shall ever turn blind eyes and deaf ears to any such kidnaps or tortures against children,” researcher in the Department of Political Science, Sandra Owen, said, as she raised alarm bells over the 1406 Palestinian children killed since 2000, including 263 below the age of 8 and 450 below 15.