Palestinian women incarcerated in the HaSharon jail have been subjected to mistreatment and harsh crackdowns, a human rights group warned Sunday.

A statement by the Palestinian Prisoners Society (PPS) sounded alarm bells over the oppressive policies perpetrated against Palestinian women in HaSharon lock up.

PPS spoke out against the systematic policies of psycho-physical torture pursued in HaSharon prison, saying they rather aim to dampen the prisoners’ spirits.

According to the Silwan-based Wadi Hilweh Information Center, the occupation army stormed Ras Al-Amoud, in Silwan, and broke into a Palestinian school, triggering a state of panic among students and teaching staff.

The IOF soldiers showered the school with random barrages of rubber bullets and sound bombs.

No injuries were reported in the assault.
Israeli policemen brutalize Palestinian child in east Jerusalem

Israeli policemen on Sunday afternoon detained and physically assaulted a Palestinian child in Occupied Jerusalem before releasing him later on the same day.

A family source said that 10-year-old Adnan Amr was severely beaten and sprayed with pepper gas in his face by Israeli policemen from Har Homa (Abu Ghneim) settlement, southeast of Jerusalem, after chasing him on motorbikes.

The policemen chased Amr and other kids, who were going home from school, after a settler living in a seized house in Silwan complained he was stoned by Palestinian boys.

Amr was taken to a local medical center to receive treatment of the injuries he suffered during the assault.

The parents of Amr are noted pro-Aqsa activists in east Jerusalem, and the police already issued orders banning them from entering the Aqsa Mosque and traveling abroad.
30 oct 2016
Child injured in assault by soldiers near Ramallah

The Red Crescent said that one of its ambulance crews evacuated 13-year-old Ameer Farrukh from an area near the bypass road in Beitunia after his exposure to severe beating by soldiers.

It added that the child suffered leg fractures and bruises in different parts of his body.

Local sources asserted the boy was assaulted on Idrees farm near the Israeli-controlled bypass road, noting that he was alone in the area.

In a separate incident, a group of Palestinian farmers from Huwara town in Nablus survived a possible attack by Jewish settlers from Yitzhar settlement after an Israeli security guard premeditatedly prevented them from harvesting olives from their grove.

According to Huwara municipal chief Naser Hawari, a security guard from Yitzhar settlement intercepted the farmers upon their arrival at their olive fields in al-Lahf area, west of the town, and told them that they could not collect olives, claiming that their coordination with the Israeli authorities to enter their land had been cancelled.

As a result, the farmers had to go back and as they were walking, they saw a horde of settlers blocking the main road waiting to assault them, so they took another route to avoid them.

The farmers had already been permitted by the Israeli authorities to enter their fields to harvest olives for three days.
27 oct 2016
Israeli forces detain 17 Palestinians, including two young children, in overnight raids

Israeli forces detained at least 17 Palestinians, including two young children, during overnight raids across the occupied Palestinian territory, also raiding the home of a sick prisoner and threatening his family, locals said.

Israeli forces detained two 8-year-old children near the illegal Israeli settlement of Migdal Oz in the occupied West Bank district of Bethlehem on Wednesday evening, claiming that they were trying to carry out a stabbing attack.

An Israeli army spokesperson told Ma’an that two Palestinian children under the age of ten were detained near Migdal Oz, and that knives were found in their possession.

She added that the two children, who were reportedly from the village of Beit Fajjar, said during interrogations that they had been sent by someone to carry out a stabbing attack.

She did not have further information on whether the children were still detained as of Thursday evening, nor whether their parents had been contacted.

The army spokesperson told Ma’an that one person had been detained in Bethlehem, likely referring to Abu Salem.

In the southern West Bank district of Hebron, locals told Ma’an that Ayman Taha was detained in Hebron city, while Rami Muhammad Jaber al-Rujoub was detained in the village of Dura.

Meanwhile, Yassir Allan was reportedly detained in Shufat in the Jerusalem district of the West Bank.

In the central West Bank district of Ramallah, the army spokesperson said that one Palestinian was detained in the village of Kharbatha al-Misbah.

Locals added that Israeli soldiers stole money while searching the houses, and that clashes broke out between Palestinian youth and Israeli forces, without causing injuries.

Israeli forces also raided the home of sick prisoner Mutawwakil Radwan overnight, and threatened his access to medical care if his relatives kept advocating for his release.

Radwan, who is serving a 22-year-sentence, is currently at the al-Ramla Hospital in a fragile health condition as he suffers from cancerous tumors and heart disease.

Several events have been carried out in solidarity with Radwan in Qalqiliya recently demanding his release.

An Israeli intelligence officer informed Radwan’s relatives that the prisoner was being treated at one of the best Israeli hospitals, and warned them against any increase in popular support for Radwan.

In the northern West Bank, locals reported that Israeli forces detained Anwar al-Sakhil in the city of Nablus, as well as Shadi Talal Zakarna in the Jenin-district village of Qabatiya.

The army spokesperson confirmed one detention in Qabatiya, but said that two Palestinians, one of whom was an alleged Hamas operative, were detained in Nablus.

She added that another Palestinian was detained in the Salfit-district village of Bani Hassan.

Israeli forces carry out detention raids in Palestinian communities on a near-nightly basis, with the UN documenting 178 such raids from Oct.4 to Oct. 17.

According to prisoners rights group Addameer, 7,000 Palestinians were detained by Israel as of August.
PPS: “Israeli Army Kidnaps 28 Palestinians, Including Children, In The West Bank” 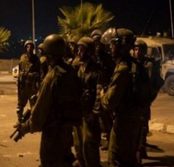 The Palestinian Prisoners Society (PPS) has reported that Israeli soldiers kidnapped, overnight and at dawn, twenty-eight Palestinians, including children, in different parts of the occupied West Bank. The Bethlehem office of the PPS said the soldiers kidnapped eleven Palestinians in the district, mainly from al-Khader town, south of Bethlehem.

In Ramallah district, the soldiers invaded and searched many homes and the district, and kidnapped Mohammad Abbassi, 16, Yousef Ahmad Hashem, 15, Mohammad Omar Hussein, 28, and Ala Sobhi Hammouda.

In Nablus, in the northern part of the West Bank, the soldiers kidnapped Abdul-Rahma Waleed Saleh, 20, and Anwar Sa’ad Sakha, 25.