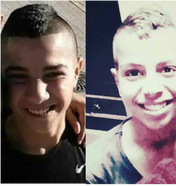 The Israeli occupation court also stipulated that both minors shell out a bail of 50,000 shekels.

The two minors have been held in custody since January 30, 2016.

Earlier, on the same day, an Israeli court sentenced the Palestinian child Ahmad Manasra to 12 years in prison.

“Instead of apologizing to Manasra and his friends, along with the world’s children, for its crimes, Israel continues to perpetrate other crimes,” said Qaddura.

“This is just part of the tragedy endured by Palestinian children in the occupied territories,” he added.

Qaddura urged the United Nations Secretary-General, the Human Rights Council, and the UNICEF to opt for serious and practical measures in response to the Israeli crimes against Palestinian children.

A number of Palestinian children from Occupied Jerusalem were sentenced to actual imprisonment for terms of up to 12 years.
14-year-old Manasra Sentenced to 12 Years in Israeli Prison

An Israeli court in Jerusalem, on Monday, sentenced 14-year-old Ahmad Manasra to 12 years of prison, under conviction of attempted stabbing.

Ahmad, on 12 October, 2015, was shot and tortured on camera by an Israeli settler, while his cousin, Hassan Manasra, was killed on the spot, for allegedly stabbing settlers in Pisgat Ze’ev settlement, Jerusalem.

Ahmad’s lawyer, Tareq Barghouth, said that the court also imposed a financial compensation of 180,000 shekels, according to the PNN.

An international uproar was caused around the case, with regard to the torture and videos later, as the boy was shown being abused by Israeli investigators.
Ahmad stayed in the hospital before he was taken to prison.

The Palestinian Prisoners Society (PPS) has reported that Israeli soldiers have kidnapped, overnight and earlier Monday, seventeen Palestinians, including children, in different parts of the occupied West Bank.

The PPS said the soldiers invaded several towns in the Ramallah and al-Bireh District, searched dozens of homes and kidnapped seven Palestinians.

In addition, the Bethlehem office of the PPS, said the soldiers also invaded homes in Husan town, west of the city, and kidnapped four Palestinians, identified as Mohammad Nasser Sabateen, 25, Ala’ Mohammad Shousha, 15, his brother Islam, 14, and Obeida Adel Sha’er, 16.

On Monday at dawn, several Israeli military vehicles invaded Ramallah city and many nearby villages, and clashed with local youngsters; and surrounded a hotel, invaded a coffee shop, and illegally confiscated cash.

Furthermore, several military vehicles invaded an advertisement company, in the southern West Bank city of Hebron, violently searched it, causing excessive damage, before confiscating its computers, and other equipment.

Also in Hebron, the soldiers invaded the home of detain Dia’ Jabr at-Teety, in the al-‘Arroub refugee camp, and summoned his wife for interrogation at the Etzion military base and security center.

The soldiers also invaded, and ransacked, a home in Hebron and summoned a child, identified as Saeb Abu Najma Tamimi, 15, for interrogation in Etzion.

The Palestinian Prisoners Society (PPS) said the soldiers invaded, on Monday at dawn, several areas in the West Bank districts of Tulkarem, Jerusalem and Bethlehem, searched many homes, and kidnapped six Palestinians, including two underage siblings.

The Bethlehem office of the PPS said several army vehicles invaded the village of Husan, west of the city, searched many homes and kidnapped three Palestinians, including two children.

The soldiers conducted extensive searches of homes, causing property damage, and interrogated many Palestinians while examining their ID cards.

Also at dawn, several Israeli military vehicles invaded Ramallah city in central West Bank, and many nearby villages, leading to clashes between the invading forces and local youngsters. The soldiers surrounded a hotel, invaded a coffee shop, and illegally confiscated cash.

Furthermore, several military vehicles invaded an advertisement company, in the southern West Bank city of Hebron, violently searched it, causing excessive damage, before confiscating its computers, and other equipment.

Also in Hebron, the soldiers invaded the home of detain Dia’ Jabr at-Teety, in the al-‘Arroub refugee camp, and summoned his wife for interrogation at the Etzion military base and security center.

The soldiers also invaded, and ransacked, a home in Hebron and summoned a child, identified as Saeb Abu Najma Tamimi, 15, for interrogation in Etzion.
3 nov 2016
A woman among 5 Palestinians arrested in OJ, Nablus

The Israeli Occupation Forces (IOF) arrested Thursday afternoon five Palestinians from Jerusalem and West Bank. A woman and students were among the detainees.

The young man was detained after Israeli forces stopped and searched his car at a military checkpoint.

A bullet-proof vest, a flashlight, a baton, and a tear gas bomb were allegedly found in his car, according to police statement.

Along the same line, a Jerusalemite woman was arrested in the Old City and taken for investigation in a nearby police station for unknown reasons.

Two other students were arrested as clashes broke out south of Nablus. Several injuries were reported during the clashes.

The clashes broke out when Israeli forces heavily fired teargas bombs at Palestinian students while leaving their school.

A 15-year-old girl was hit with a sound bomb in her head during the confrontation, while dozens others suffered teargas inhalation cases.

The Israeli Military Ofter Court on Wednesday evening sentenced the anti-occupation youth Murad Id’is, 16, to life in jail and a steep fine.

16-year-old Id’is, a native of al-Khalil’s southern town of Yatta, was sentenced to life imprisonment and a fine of up to 750,000 shekels on charges of stabbing an Israeli settler in the illegal Atna’il outpost, built on Palestinian lands to the south of al-Khalil province, in the southern occupied West Bank.

Last July, the Israeli occupation authorities knocked down Id’is’s family home as part of a tactic of collective punishment perpetrated against the families of Palestinian anti-occupation protesters.

Most of the anti-occupation stabbing attacks carried out by Palestinian youth since the outburst of the Jerusalem Intifada, in early October last year, have been in response to Israel’s simmering terrorism against the holy al-Aqsa Mosque and Palestinian civilians across the occupied territories.
2 nov 2016
Soldiers Invade Zabbouba, Assault A Child

Several army vehicles invaded the village, before the soldiers stormed and searched homes, and interrogated many Palestinians.

The soldiers also searched the home of ‘Assem Sha’bana, and occupied its rooftop before using it to fire gas bombs and rubber-coated steel bullets at local youngsters who hurled stones at military jeeps invading their village, causing many Palestinians to suffer the effects of teargas inhalation.

Zabbouba has been subject to frequent Israeli military invasions, and searches of homes, leading to ongoing clashes.
Report: 130 children among 554 Palestinians detained in October

554 Palestinians, including 130 children, were arrested by the Israeli occupation forces (IOF) from the West Bank and Gaza in October, rights groups reported.

The report kept record of the arrest of 261 Palestinians, including 91 children, in Occupied Jerusalem, 60 in Al-Khalil, and 54 in Nablus, 48 in Bethlehem, and 30 in Jenin.

The IOF also arrested 27 Palestinians in Ramallah and Al-Bireh, 26 in Tulkarem, 23 in Qalqilya, nine in Tubas, eight in Jericho, and four in Salfit.

The number of Gazans arrested by the IOF in October was estimated at four.

According to the report, 7,000 Palestinians are locked up in Israeli jails, among whom 64 female detainees, including 13 minor girls. The number of children in Israeli Megiddo and Ofer penitentiaries has hit 400 while the number of administrative detainees has gone up to 700 during the same period.

About 530 Palestinians were reportedly detained or arrested, including children and women, by Israeli military or security forces in Jerusalem and the West Bank during last October.

According to a report released by the Palestinian Prisoner Center for Studies, over 100 minors under age 18, the youngest of them 10-year-old Adnan Amr, as well as 18 women and girls, mostly from Jerusalem, were either detained or arrested last month.

250 of those arrested Palestinians were from Jerusalem and six from the Gaza Strip. The detainees also included two journalists from al-Khalil and the 1948 occupied Palestine.

The report also noted that Israel’s military courts issued 120 administrative detention orders, without indictments, against Palestinian internees. 36 of them were for the first time and 84 were extensions.
Israeli Naval Forces Continue to Chase Palestinian Fishermen in Gaza Sea; 6 Fishermen, including Child, Arrested and 2 Fishing Boats Confiscated

The Palestinian Centre For Human Right (PCHR) On Tuesday, 01 November 2016, Israeli gunboats chased and opened fire at Palestinian fishing boats.  They then arrested 6 fishermen, including a child, and confiscated two fishing boats and nets on board.

The Palestinian Center for Human Rights (PCHR) noticed that Israeli forces have recently concentrated their attacks against fishermen in Gaza Sea, denying them access to their livelihood and free fishing in Gaza Sea.

According to PCHR’s investigations, at approximately 09:40, Israeli gunboats stationed offshore, northwest of al-Wahah Resort, northwest of Beit Lahia in the northern Gaza Strip, opened fire at Palestinian fishing boats and then surrounded two of them sailing within 4 nautical miles.

The Israeli naval soldiers ordered the six fishermen to take off their clothes, jump into the water and swim towards the gunboat.  They were then arrested while their boats and 55 nets were kept in custody.

The Israeli Occupation Forces (IOF) arrested late Monday a Palestinian child from Fawar refugee camp in al-Khalil to the south of West Bank.

The 14-year-old Atia Abu Warda was detained after being summoned for interrogation in Etizon investigation center north of the city, the PIC reporter said.