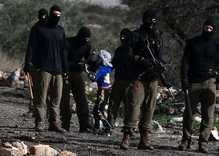 (Photo: Masked members of the Israeli security forces briefly detain a Palestinian boy during clashes following a demonstration against the expropriation of Palestinian land, by Israel, in the village of Kfar Qaddoum, near Nablus, in the occupied West Bank, on December 23, 2016. / AFP / JAAFAR ASHTIYEH)

Today, Friday December 23rd, 2016, the village started its march, as usual, toward the blocked road. Suddenly, 12 soldiers from a special unit of the Israeli occupation force surprised them in an ambush, and attacked and arrested a 7-year-old Palestinian child.

Twelve heavily armed soldier’s surrounded the boy, attacking him.  One of them forcefully grabbed the boy from his neck, questioning him about his father.

Kafr Qaddoum’s weekly protests have been occurring since July of 2011, in the attempt to take back the road that connects their village to the city of Nablus, elongating Palestinians’ commute by 14 kilometers.

These demonstrations are always met by Israeli occupation forces and/or border police, who throw sound grenades, tear gas, rubber-coated steel bullets, and, at times, live ammunition to prevent the nonviolent protesters from executing their democratic rights.

The young boy was released after one hour, and he told his father, “I was very afraid. I didn’t know what to do. I just began shouting between 12 huge soldiers, and one of them hanged me from my neck and asked me about my father”.

The boy continues to experience the effects of post-traumatic stress syndrome, shaking continuously, while sharing more of the experience to his family.
IOF arrests Jerusalemite child

The Israeli occupation forces (IOF) arrested on Friday Laith al-Khatib, 16, in front of his house in Hizma town to the northeast of occupied Jerusalem.

The child was taken to an unknown destination, local sources reported.

An Israeli court imposed on Friday house arrest on two children from al-Issawiya village in the center of occupied Jerusalem.

Human rights sources said that the Israeli court imposed house arrest on Mohammed Mustafa, 16, and Khaled Abu Ghoush, 17, in addition to imposing a bail as a condition for their release.

House arrest is a punishment by the Israeli occupation authorities against Palestinian children locking them into their houses until the court's verdict is issued. The days spent under house arrest are not counted in any sentence passed later by the court. Such punishments deny children their rights to study and play and cause them psychological and behavioral complications.
5 Jerusalemites children face harsh sentences

Israeli Central Court issued on Thursday different sentences ranging between 15 and 36 months against five Jerusalemite minors, in addition to imposing fines on their families.

The five minors were arrested in March 2015 on charges of being involved in stone-throwing attacks.

Bassem Sbeitani, 17, also faces a 15-month sentence in addition to a fine estimated at 1000 shekels.

The five detainees are currently held in Megiddo prison.

A recent report released by DCIP found that Israel held 440 Palestinian children in custody at the end of February 2016, more than twice the monthly average since 2011 and the highest number at any given point since the Israel Prison Service began releasing data in 2008.
22 dec 2016
Israeli Army Abducts Thirteen Palestinians In The West Bank

The Palestinian Prisoners Society (PPS) said that Israeli soldiers have abducted overnight and at dawn Thursday, thirteen Palestinians, including three children, in different parts of the occupied West Bank, including Jerusalem.

The Tulkarem office of the PPS, in the northern part of the West Bank, said the soldiers invaded many homes in the district, and abducted five Palestinians, identified as Sanad Abu Shanab, Ahmad Fares al-Jayyousi, his brother Fares, Fawwaz Rashid al-Jayyousi and Tareq Mohammad Abu Leimoon.

The Abu Shanab family said the soldiers assaulted their son in front of them, causing various cuts and bruises, and took him to an unknown destination.

In Qalqilia, also in the northern part of the West Bank, the soldiers invaded and searched many homes and abducted a former political prisoner, identified as Saber Mohammad Daoud, 42, who was previously imprisoned for 4.5 years.

Owners of some of the invaded homes have been identified as Mo’taz Abdul-‘Al, Jaber Oweiss, Nasser Oweiss and Monir Oweiss.

Furthermore, the soldiers abducted a former political prisoner, identified as Mohammad Allan, from Nablus, but released him later.

Furthermore, the soldiers invaded several homes in Arraba town, southwest of the northern West Bank city of Jenin, including the homes of two former political prisoners, and confiscated electric equipment.

The Palestinian Prisoners Society (PPS) has reported that Israeli soldiers abducted, overnight and at dawn Wednesday, 24 Palestinians, including seven children, in different parts of the occupied West Bank.

The PPS office in Bethlehem, said the soldiers invaded Beit Fajjar town, south of Bethlehem, searched many homes and abducted seven children, after the army broke into and ransacked many homes.

In Hebron, in the southern part of the West Bank, the soldiers invaded many homes in several communities in the district, and abducted six Palestinians.

In Nablus district, in the northern part of the West Bank, the soldiers also stormed and searched homes and abducted six Palestinians, including four from Tal town.

In Rantis town, in the Ramallah district, the soldiers invaded many homes and abducted Mohammad Majed Khalaf and Fakhr Raslan Hammad.

In addition, the soldiers invaded homes in the Salfit district, and abducted Ali Mahmoud al-Yousef and his brother Abdul-Karim.

In Qalqilia, in the northern part of the West Bank, the soldiers abducted Mohammad Abdul-Fattah Abu Haniyya, 18, after invading his home and searching it.
20 dec 2016
Israeli Army Abduct 13 Palestinians In The West Bank

Israeli soldiers abducted, on Tuesday at dawn, at least thirteen Palestinians, including children, in different parts of the occupied West Bank, including occupied East Jerusalem.

In Ramallah, in central west Bank, the soldiers invaded Rantis town, and abducted Ahmad Ali Naddaf, 28, and Mohammad Jamal Hosha, 27, after breaking into their homes and searching them.

In Nablus, in the northern part of the West Bank, the soldiers abducted Obeida Jabour, also from his home.

The soldiers also abducted one Palestinian, identified as Mohammad Mahmoud Alawna, after invading his home in Jenin, in the northern part of the West Bank.

Furthermore, the army abducted Mohammad Hammad al-‘Allami, 20, Ahmad Badran Ebreiwish and Mohammad Taleb Awad, from their homes in Hebron, in the southern part of the West Bank.

On Monday at night, the soldiers abducted Firas Amjad Jaber, 18, from the al-Am’ari refugee camp, in Ramallah, after summoning him for interrogation in Beit El security center.

In Qalqilia, in the northern part of the West Bank, the army abducted Eman Jalal Ali, 17, after invading her home and searching it.
Army Abducts One Teen, Summons Two Children (Ages 11 and 12) For Interrogation

The Palestinian Prisoners’ Society (PPS) said the soldiers broke into several homes, violently searched them and interrogated many Palestinians.

The PPS added that the soldiers abducted Mohammad Taqatqa, 18, and summoned ‘Awni Taqatqa, 12, and Ali Deeriyya, 11, for interrogation at the Etzion military base and security center, south of Bethlehem.
Israeli Soldiers Abducts Seven Palestinians, Including Four Children, In Jerusalem

Israeli soldiers invaded, on Tuesday at dawn, several homes in the towns of Silwan and al-‘Eesawiyya, in occupied East Jerusalem, searched the properties, and abducted four children and one adult. On Monday evening, the army abducted a young man and a child in Silwan.

The Wadi Hilweh Information Center in Silwan (Silwanic) has reported that the soldiers abducted Mohammad Ali Dari, Khaled ‘Awni Abu Ghosh, 17, and Hamad Mousa Mustafa, 16, from their homes in al-‘Eesawiyya.

It added that the soldiers also abducted Ahmad Zidani, 13, and his brother Mohammad, 22, after invading their home in Silwan.

The family said the soldiers also illegally confiscated all mobile phones owned by its members while searching the property.

On Monday evening, the soldiers abducted a young man, identified as Yazan Tahhan, and a child, identified as Safir Tahhan, from Ras al-‘Amoud in Silwan.

The army also issued orders denying a Palestinian woman, identified as Raeda Sa’id, from entering the Al-Aqsa Mosque for 15 days, after abducting her, Sunday, near one of the gates leading to the mosque.
19 dec 2016
15-year-old girl sentenced to one year and half in Israeli jail

The Israeli Ofer military court sentenced the 15-year-old Palestinian girl Natali Shoukha to one year and a half in jail, a rights group reported Monday.

The Palestinian Prisoners Society (PPS) said the Israeli Ofer Court issued a prison-term of one year and a half against the Palestinian child Natali Shoukha on charges of an anti-occupation stabbing attempt.

A native of Ramon town, in Ramallah and al-Bireh province, Natali was shot and kidnapped by the Israeli occupation soldiers on April 29, 2016. She was transferred to the Shaare Zedek hospital for urgent treatment before she was transferred to an Israeli detention center shortly afterwards.
Child among Palestinians kidnapped in IOF sweep

The Israeli occupation forces at dawn Monday rolled into the West Bank and Jerusalem and kidnapped a number of Palestinians.

The IOF kidnapped four Palestinians from the Shu’fat camp, in Occupied Jerusalem.

Another Palestinian youth—Adham Ali Amer—was kidnapped by the occupation soldiers from his family home in Nablus’ town of Kafr Kalil.

The Israeli Walla news site also claimed that an Israeli settler sustained mild injuries after gunshots were fired from a vehicle driving at a high speed near Ramallah’s northern village of Aboud.

On Sunday evening, the Israeli occupation police kidnapped a Palestinian youth near Nablus province on allegations that a riffle was detected in his van.

Israeli police spokeswoman, Luba Sumari, claimed the riffle was found by the Israeli cops after they searched a vehicle driving on Bypass Road 60.

The Palestinian Prisoners Society (PPS) said the child has been identified as Ward Abdul-Qader Hamed, 15, and that he was abducted after the soldiers stopped him at the western entrance of the town.