The Israeli forces attacked the Palestinian protesters with randomly-shot spates of teargas canisters and rubber bullets.

Palestinian minors Malik Hesham al-Qaq, aged 15, and Omar Ezz Da’na, 14, were both kidnapped by the occupation soldiers in the assault.

Palestinian young men and children have been frequently chased down by the Israeli forces on allegations of anti-occupation stone-throwing attacks.
9 apr 2017
15-year-old Palestinian girl to be released from Israeli jail 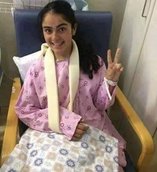 The Israeli Central Court on Sunday decided to release a 15-year-old Palestinian girl from prison.

Natali Shoukha was arrested by the Israeli occupation forces on April 29, 2016.
Israeli Soldiers Abduct A Child Near Bethlehem

The PPS stated that the soldiers invaded the home of Waleed Sabri, violently searched the property while interrogating the family, and abducted his son, Mohammad, 16.

The soldiers also drove around the town, and withdrew later, taking the child to the Etzion military base and security center, south of Bethlehem.
8 apr 2017
Israeli Soldiers Abduct Three Palestinian Children In Bethlehem And Nablus

Israeli soldiers invaded, on Saturday at dawn and Friday evening, the West Bank governorates of Bethlehem and Nablus, and abducted three children.

The Bethlehem office of the Palestinian Prisoners’ Society (PPS) said the soldiers invaded the Saff Street area, in the center of the city, and abducted As’ad Mohammad Abu ‘Ahour, 16, after breaking into his family’s home and violently searching it.

In Nablus, in northern West Bank, the soldiers abducted two children, identified as Mohammad Hatem and Khalil Mohammad Ghazal, in Sebastia town, north of the city.

Local sources said the soldiers invaded the town, and opened fire on several residents, before abducting the two children; there have been no reports or injuries.
7 apr 2017
Israeli Court Sentences Two Palestinian Children From Jerusalem To House Arrest, Imposes Fines 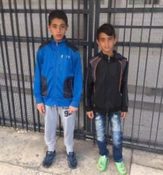 An Israeli court in occupied Jerusalem, sentenced two Palestinian children, only 12 and 14 years of age, from Silwan town, south of the Al-Aqsa Mosque, in the occupied city, to house arrest and imposed high fines on them.

The two children have been identified as Yazan Froukh, 14, and Yousef Hijazi, 12, both from Silwan town. They were abducted, on Thursday morning, and were sent to an interrogation center in the city.

Later in the day, the two children were sent to a court in Jerusalem, and were sentenced to house arrest, in addition to a fine of 2000 Israeli Shekels each, as a precondition for their release.
5 apr 2017
Report: 2,600 Palestinian children arrested in Jerusalem Intifada

Since the outbreak of the Jerusalem Intifada in Oct. 2015, at least 2,600 Palestinian children have been arrested in Israeli military detention centers notorious for the systematic ill-treatment and torture of Palestinian children, rights sources revealed.

The researcher in prisoners’ affairs Riyad al-Ashqar pointed out, in a new report marking the International Child Day, that 320 Palestinian minors are currently held in Israeli custody amid unbearable detention conditions, denied from their basic and fundamental human rights.

He also noted that Israeli arrest campaigns against Palestinian prisoners have been notably escalated since the outbreak of Jerusalem Intifada. Hundreds of them were held in different detention and investigation centers, mostly in notorious Etzion detention center.

17 Palestinian minors were detained after being injured during their arrest, some of whom were transferred to prisons without any medical care or treatment, he said.

According to the report, Palestinian detained children are brought to court not accompanied by a parent and are generally interrogated without the benefit of legal advice. They are overwhelmingly accused of throwing stones and alleged stabbing attacks, an offense that can lead to a potential maximum sentence of 10 to 20 years.
4 apr 2017
Israeli Soldiers Abduct 17 Palestinians In The West Bank 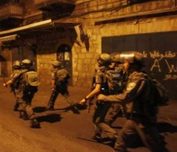 Israeli soldiers abducted, overnight and at dawn, Tuesday, 17 Palestinians, including children, during extensive invasions and violent searches of homes, in different parts of the occupied West Bank, including Jerusalem.

The soldiers invaded and searched many homes in the southern West Bank district of Hebron, and abducted Wadea’ Mohammad Badawi, 16, Abdul-Fattah Khaled Mahfouth, 16, and Monatser Mohammad Shahin, 15, all from al-‘Arroub refugee camp, in addition to Abdullah Ali al-Arouri, 22, from Yatta town, and al-Mo’tasem Billah Al-Jeyyawi, from Ethna.

In Jenin district, in the northern part of the occupied West Bank, the soldiers abducted Omar Hamarsha, from Ya’bad town, south of the city, after confiscating his car and searching his home, while Mohammad Hamdan Kanash, 27, and Mohammad Jamal Mas’oud, were abducted from their homes in Barta’a nearby town.

In Ramallah, the soldiers abducted Aseed Morad Nakhla, 17, Sufian Mohammad Sharaka, 18, and Mohammad Nidal ‘Oleyyan, 16, from their homes in the al-Jalazoun refugee camp.

In Jerusalem, the soldiers abducted Mohammad Ziad Shamasna, 18, and Bilal Mustafa Shamasna, 19, from their homes in Qotna village, northwest of Jerusalem.

Israeli soldiers abducted, on Tuesday at dawn, four Palestinians during violent invasions and searches of homes, in the southern West Bank district of Hebron, the Palestinian Prisoners’ Society (PPS) has reported.

In addition, many army vehicles invaded several neighborhoods in Hebron city, also in the towns of Yatta and Sammoa’, and the al-‘Arroub refugee camp, before conducting extensive and violent searches of homes.

The soldiers also stopped and searched many cars, and interrogated several Palestinians, while inspecting their ID cards.
3 apr 2017
Israeli Soldiers Abduct 14 Palestinians In The West Bank

Israeli soldiers abducted, on Monday at dawn, fourteen Palestinians, including two children, only 12 and 13 years of age, during military invasions and violent searches of homes, in different parts of the occupied west Bank, in including occupied East Jerusalem.

The Palestinian Prisoners Society (PPS) has reported that the soldiers abducted six Palestinians, including two children, from their homes in several parts of occupied East Jerusalem.

In Ramallah district, in central West Bank, the soldiers abducted Ata Othman Orabi and Mohammad Jamal Nakhla, from the al-Jalazoun refugee camp, in addition to Dia’ Mohammad Ja’far, from the al-Am’ari refugee camp, while Ahmad Wael ‘Affana was abducted by undercover soldiers, who broke into his home in the al-Masyoun neighborhood in Ramallah city.

In Hebron, in the southern part of the West Bank, the soldiers abducted Shebil Ahmad Daghameen.