At least 17 Palestinians were kidnapped by the Israeli forces from al-Issawiya town, northeast of Occupied Jerusalem, at daybreak Sunday.

A PIC news reporter said the Israeli soldiers broke into Palestinian homes in al-Issawiya and kidnapped 17 civilians, including minors.

The list of detainees included 16-year-old Shadi Atiyeh, Adam Mahmoud, and Akram Mustafa, along with Mohamed Mahmoud, Abdul Kadir Dari, Firas Nidhal Mahmoud, and Ismail Muheissen, all in their 17s.

Israeli soldiers abducted, on Thursday evening, a Palestinian child who was shot by an army sharpshooter, in the al-‘Eesawiyya town, in occupied East Jerusalem, after the soldiers chased an ambulance transporting him to the hospital.

The child, identified as Mos’ab Mahmoud Mheisin, 14, was shot by several live rounds in the lower extremities, including the groin.

One of his relatives, identified as Bashar Mheisin, said that Mo’ab was standing just a few meters away from his home, and he and his family were on their way to a social event, when clashes took place after the soldiers invaded al-‘Eesawiyya, and clashed with local youths, who hurled stones at their vehicles.

After being shot with several live rounds, a Palestinian ambulance moved him to the al-Makassed hospital, in the at-Tour area, and the doctors later decided he needs further treatment at Shaare Tzedek Israeli medical center.

Mheisin stated that the soldiers, driving a civilian car, chased the Palestinian ambulance, before stopping it, and forced the driver to park it near Augusta Victoria hospital, not far from al-Makassed.

“Then they wrote down my ID number, my phone number, and asked me many questions, before two officers accompanied us in the ambulance that was ordered to head to Sha’are Tzedek Medical Center,” he said, “The civilian car that transported secret security officers, followed us all the way there.”

Mheisin added that the incident led to at least an hour delay in transferring the child, despite his serious injuries, and his urgent need to surgery.

The child’s family managed to stay with him until midnight, but the guards forced them to leave, after questioning him and his uncle Bashar.

On Friday, an Israeli ambulance took the wounded child to the District Court in occupied Jerusalem, where a judge ordered him under interrogation at the Police station in Salaheddin Street area.

Mohammad Abu al-Hummus, a member of the Follow-Up Committee in al-‘Eesawiyya, said the soldiers frequently invade the town, and fire live rounds, rubber-coated steel bullets, gas bombs and concussion grenades, in addition to occupying rooftops to use them as firing posts during clashes.

He added that the wounded child was shot by one of the army sharpshooters, who occupied a rooftop of a residential building, one of many that were utilized by the soldiers as firing posts and monitoring towers.

Abu al-Hummus further said that the soldiers deliberately conduct provocative acts during their invasions, and resort to violent searches of homes and property, in addition to harassing the Palestinians and preventing them from even standing in front of their own homes, or on their balconies.
27 apr 2017
Israeli Soldiers Abduct Five Palestinians, Including A Child, In Qalqilia And Tubas 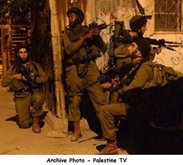 Israeli soldiers abducted, on Thursday at dawn, five Palestinians, including a child, in the West Bank governorates of Qalqilia and Tubas.

The Qalqilia office of the Palestinian Prisoners’ Society (PPS), in the northern part of the occupied West Bank, said the soldiers invaded Kufur Qaddoum town, east of the city, searched several homes and abducted two Palestinians.

It identified the abducted residents as Ala’ Saed Obeid, 15, and Ali Mohammad Amer, 25; both were cuffed and blindfolded before the soldiers took them to an unknown destination.

In addition, the soldiers invaded Tubas city, in the northeastern part of the West Bank, and Tammoun town, south of Tubas, also violently searched homes, and abducted Faze’ Sawafta and Osama Sawafta, both from Tubas, in addition to Loot Bisharat, from Tammoun.
26 apr 2017
Palestinian minor sentenced to 10 years imprisonment

The girl was detained in February 2016 near the Old City in occupied Jerusalem for allegedly trying to stab an Israeli soldier.

Since then, she was transferred to different Israeli prisons, most recently to HaSharon prison.

Her detention was extended more than once till the court’s imprisonment order.

The Israeli District Court in occupied Jerusalem sentenced, Wednesday, a Palestinian teenage girl to ten years in prison, after convicting her of “an attempted stabbing attack,” in the city. The verdict came after Israel delayed her court hearings 24 times since he abducted in February 2016.

The court session was held after repeated delays and rescheduling by the Israeli Prosecutor’s Office, then following Wednesday’s hearing, the teen, identified as Malak Salman, 17, was sentenced to ten year in prison.

Her lawyer and family rejected an Israeli plea agreement sentencing her to fifteen years in prison in exchange for “confession of carrying out a stabbing attack against the soldiers.”

Malak was taken prisoner, on February 9th 2016, in Bab al-‘Amoud area, one of the famous gates of the Old City of occupied Jerusalem.

Amjad Abu Assab, the head of the “Jerusalem Detainees’ Parents Committee,” denounced the verdict and considered it another Israeli assault on children in occupied Palestine, especially in Jerusalem.

He added that this verdict showed the “real racist nature of the Israeli legal system” amidst ongoing deadly international silence, especially in Malak’s case, who never attempted any attack.”

Abu Assab criticized various international legal and human rights groups for what he called “complicity with the Israeli crimes,” especially since Israel’s ongoing aggression and occupation are serious violations on International Law, the Fourth Geneva Convention and all related treaties.

He also stated that detained women are held in prisons far away from their families, and are living under very difficult conditions, ongoing violations, and denied basic rights.

It is worth mentioning that Malak was violently beaten up by the soldiers when they abducted her in Bab al-Amoud, causing various cuts and bruises.

Since her abduction and imprisonment, Malak’s courts sessions have been delayed by Israel for more than 24 times, and she was continuously being transferred to various prisons; she is currently held at the HaSharon prison.
25 apr 2017
Israeli Soldiers Abduct Fifteen Palestinians In The West Bank 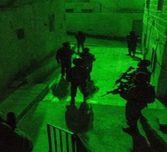 Israeli soldiers abducted, on Tuesday at dawn, at least fifteen Palestinians, including children, during massive invasions and violent searches of homes, in different parts of the occupied West Bank, the Palestinian Prisoners’ Society (PPS) has reported.

In Nablus governorate, in the northern part of the occupied West Bank, the soldiers abducted Mahmoud al-Jibaji, Mohammad al-Asmar, Jamil al-Aqra’, Ezzeddin al-Aqra’ and Ahmad Abed, from the New Askar Refugee Camp, in addition to two other Palestinians from Huwwara town, south of Nablus city.

The soldiers also invaded Hares village, in Salfit, in the northwestern part of the occupied West Bank, searched homes and abducted one Palestinian.

In Hebron, in the southern part of the West Bank, the soldiers abducted Khalil Mosallam Khalaila, after breaking into his home, in Sammoa’ town, south of the city, and violently searching it.

In addition, the soldiers abducted Islam Nimir, from his home in the al-Am’ari refugee camp, and two others in Arik town and Um ash-Sharayet area, in the Ramallah and al-Biereh District, in central West Bank.
24 apr 2017
Two Palestinian Children Injured After Being Rammed By A Speeding Settler’s Car Near Jerusalem

Palestinian medical sources have reported that two children were injured, on Sunday evening, after being struck by a speeding Israeli settler’s car, while walking with their parents in Sur Baher town, south of occupied East Jerusalem.

The sources stated that Mohammad Mousa Attoun suffered a head wound, while his sister, Nada, suffered several cuts and bruises.

An Israeli ambulance was called to the scene, and moved the two children to a hospital for treatment; their condition has been described as stable.

Eyewitnesses said a settler, who was accompanied by a passenger, entered the center of town from its main road, and was speeding through its streets, apparently while being chased by an Israeli police car, before ramming the two children in addition to striking several parked cars.

The settlers fled the scene, and hid in a medical center, before dozens of soldiers invaded Sur Baher, clashed with many local youths, and evacuated them.

In Ramallah, several military jeeps and trucks invaded Bani Saleh village, northwest of the city, and searched many homes before abducting two children, identified as Ahmad Tamimi, 15, and Mohammad Tamimi, 14, and took them to an unknown destination.
12 apr 2017
Army Abduct Three Palestinian Teenagers in Bethlehem

The Bethlehem office of the Palestinian Prisoners Society (PPS), in the occupied West Bank, has reported that Israeli soldiers invaded, earlier Wednesday, the Deheishe refugee camp, south of the city, and Husan town, west of Bethlehem, and abducted three Palestinian teenagers, including a child, 15 years of age.

The PPS stated that the soldiers surrounded the Deheishe refugee camp, before invading it, violently searched homes and abducted Mohammad Monjed Lahham, 18.

It added that the soldiers also invaded and ransacked homes in Husan village, west of Bethlehem, and abducted Mohammad Za’ouli, 17, and Bashar Sabateen, 15.
11 apr 2017
Palestinian child attacked by Israeli settlers

A group of Israeli settlers attacked a Palestinian child in al-Khalil on Tuesday leaving him suffering from different injuries and bruises.

According to the PIC reporter, the 14-year-old Hassan Shaloudi was transferred to hospital after being brutally beaten by a group of settlers while on his way to school.

The assault occurred Tuesday morning when the settlers stopped Hassan and ordered him to open his bag and to throw all its content onto the ground. The schoolboy was then beaten after he refused to do so.

Hassan fainted and was left bleeding on the ground before being taken to hospital.