Israeli soldiers closed, on Tuesday afternoon, the al-Lubban School for Girls, south of the northern West Bank city of Nablus, after threatening to attack it with gas bombs.

‘Aisha Nubani, the principal of the school, told the WAFA Palestinian News Agency that the soldiers ordered the instant evacuation of the school, allegedly after a colonialist settler’s car crashed into another car when Palestinian youngsters hurled stones at it, near the educational facility.

The soldiers threatened to fire a barrage of gas bombs into the school unless it is immediately evacuated and closed.

The soldiers chased many students in the meadows surrounding several schools in the area, near the main Ramallah-Nablus road, which is also used by the military and colonialist settlers.
3 apr 2018
Army Injures Many Schoolchildren In Hebron

Israeli soldiers fired, on Tuesday morning, several gas bombs at schoolchildren in Abu Sneina neighborhood, in the southern part of the occupied West Bank, causing many children, and other Palestinians, to suffer the effects of teargas inhalation.

Eyewitnesses said the soldiers fired the gas bombs into the Nahda School, and its surrounding areas, and added that local medics provided the needed treatment to the wounded children.

They added that several Palestinians then hurled stones at the soldiers, who fired more gas bombs, and concussion grenades.

On Monday afternoon, the soldiers also fired gas bombs at students of the same school, causing many to suffer the effects of teargas inhalation.
Updated: Israeli Soldiers Abduct Eighteen Palestinians In The West Bank 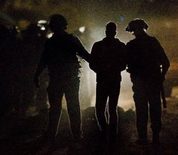 The Palestinian Prisoners’ Society (PPS) has reported that Israeli soldiers abducted, on Monday at night until morning hours Tuesday, eighteen Palestinians from their homes, after breaking into them and violently searching them, in several parts of the occupied West Bank.

In a press release, the PPS said the soldiers abducted Aysam Emad Nazzal, 17, Mahmoud Riyadh Zakarna, 16, and Mandoub Bassem Kamil, 17, from their homes in Qabatia town, south of the northern West Bank city of Jenin.

The PPS added that the soldiers invaded and searched many homes, in various areas of Ramallah governorate, in central West Bank, and abducted five Palestinians.

The abducted Palestinians have been identified as Bassem Hasan M’eitan, 40, from Burqa town, Nihad Amin Dar al-Eid, 16, after the soldiers shot him, in addition to Waseem Mohammad Sarhan, 19, from Nabi Saleh, Ahmad Ibrahim and Khaled Omar B’eirat, from Kafr Malek town.

In Hebron, in southern West Bank, the soldiers invaded homes in the al-‘Arroub refugee camp, and abducted Khader Yousef Madhi, 23, after the soldiers assaulted him and his family.

Another Palestinian, identified as Mohammad Sobhi Enab, was abducted by the soldiers after they shot him near Tulkarem, in northern West Bank.

Israeli soldiers abducted, on Tuesday at dawn, twelve Palestinians from their homes, in several parts of the occupied West Bank.

The soldiers broke into and violently searched dozens of homes across the West Bank, interrogated many Palestinians while inspecting their ID cards, before abducting the twelve Palestinians.

The soldiers also closed the main gate, leading to Deir Nitham village, west of Ramallah, and prevented the Palestinians from entering or leaving it.

In Hebron, in the southern part of the West Bank, the soldiers abducted Khader Madhi, 24, the brother of Omar Madhi, 15, who was killed by the army on February 12, 2016.

His other brother, Mahmoud, 14, was abducted from his home in the al-‘Arroub refugee camp, north of Hebron, several days ago,

Furthermore, the soldiers invaded and searched many homes in the al-Khader town, south of Bethlehem, and interrogated many Palestinians.
2 apr 2018
Israeli Army Abducts Six Children In Jerusalem, Five Young Men In Bethlehem, Nablus And Qalilia

Israeli soldiers abducted, on Monday at dawn, six Palestinian children from their homes in occupied East Jerusalem, in addition to abducting a young man in Bethlehem, three in Nablus, and one in Qalqilia, the Palestinian Prisoners’ Society (PPS) has reported.

The PPS said that dozens of soldiers invaded the al-‘Isawiya town, in the center of Jerusalem, searched and ransacked many homes and abducted six Palestinians, before moving them to interrogation centers in the city.

It is worth mentioning that the town has been subject to daily invasions for more than a year, in addition to a strict military siege over the past two months.

Also in Jerusalem, the soldiers stationed at the Chain Gate, leading to the Al-Aqsa Mosque, prevented one of the holy site’s guards, identified as Mohammad Badran, from entering it.

The soldiers also invaded the home of Abdul-Rahman Bani Fadel, in Aqraba village, and handed his family a demolition order to their property.

The army claims that Bani Fadel carried out a deliberate attack, last month, killing one Israeli security guard, before he was shot dead by Israeli soldiers.

In Qalqilia, also in northern West Bank, the soldiers abducted Mohammad Ali Sweilem, 22, while crossing a sudden military roadblock, east of the city.

The Palestinian was heading to his college, Palestine Technical University – Kadoorie, and his father is a political prisoner, serving a life term in Israeli prisons.

A Palestinian deaf child was shot and seriously injured by Israeli gunfire east of Khuzaa town to the east of Khan Younis city in the southern Gaza Strip on Sunday.

The spokesman of the Palestinian Health Ministry, Ashraf al-Qudrah, affirmed that the boy sustained a critical injury in the head and that he was transferred to the European Hospital in Gaza where he is receiving treatment. Video
Israeli Soldiers Abduct Four Palestinians Near Hebron And Bethlehem

Israeli soldiers abducted, on Sunday at dawn, four young Palestinian men, including two teenage siblings, from their homes near Hebron and Bethlehem, in the occupied West Bank.

The soldiers also stopped and searched cars at the main entrance of the refugee camp, and interrogated many Palestinians while inspecting their ID cards.