The Jerusalemites Forum said his chairman Khaled Sabbah affirming that the forum is apolitical and is not affiliated with any Palestinian political actor.

Sources also pointed out that 12 teams with players, aged between 12 and 13 years old, from the Jerusalem district were scheduled to play in the canceled tournament.

Illegal Israeli settlements, along with the Israeli separation wall, have effectively cut off Beit Safafa from the West Bank.

The Palestinian Prisoners’ Society (PPS) has reported that Israeli soldiers abducted overnight and on Thursday at dawn, nineteen Palestinians, including one woman and two children, in several parts of the occupied West Bank.

The PPS stated that the soldiers invaded and ransacked dozens of homes across the West Bank, including occupied East Jerusalem, and interrogated many Palestinians while inspecting their ID cards.

The soldiers also installed many roadblocks across the West Bank, especially in and around Hebron, in the southern part of the West Bank, before stopping and searching dozens of cards, and interrogated scores of Palestinians while inspecting their ID cards.

Among the invaded areas are the neighborhoods surrounding Qalandia refugee camp, north of Jerusalem.

Furthermore, the Israeli army claimed that a Palestinian hurled a grenade at an army vehicle, during an invasion into ‘Azzoun town, east of Qalqilia, in northern West Bank, causing no injuries.

A 13-year-old Palestinian was shot and injured with Israeli live fire during violent clashes between Israeli forces and Palestinian youths in Hizma town, in the central occupied West Bank district of Jerusalem, on Tuesday evening.

Local sources told Ma'an that a large number of heavily armed Israeli forces raided Hizma town and sealed off its entrance, preventing passage in both directions.

Sources said that following the seal off, clashes erupted among Israeli forces and Palestinian youths, during which soldiers opened fire, injuring the 13-year-old boy.

The injured Palestinian minor, whose identity remained unknown, was transferred to the Hizma medical clinic for necessary medical treatment. However, he was then transferred to Ramallah Governmental Hospital due to his serious injury.

Medical sources confirmed that the minor suffered a serious injury in his knee. His medical condition remained unknown.

Israeli soldiers abducted, on Wednesday at dawn, 21 Palestinians in several parts of the occupied West Bank, and storming and ransacking their homes, the Palestinian Prisoners’ Society (PPS) has confirmed.

In Hebron, in the southern part of the West Bank, the soldiers abducted two siblings, identified as Maher, 50, and Mousa Jaradat, 32.

In occupied Jerusalem, the soldiers abducted a child, identified as Ibrahim Gheith, 14, from Silwan town. video

Israeli forces detained at least 21 Palestinians, including a minor, across the occupied West Bank on predawn Wednesday.

According to Palestine Prisoner’s Society (PPS), Israeli forces detained two Palestinian brothers in the southern West Bank district of Hebron. They were identified as Maher Jaradat, 50, and Mousa, 32.

In the central West Bank district of Jerusalem, one Palestinian was detained and identified as Ibrahim Ghaith.

According to prisoners rights group Addameer, there are 5,450 Palestinian prisoners being held in Israeli prisons, including 205 minors, 32 of whom under 16 years old.
Illegal Israeli Colonist Hits Palestinian Child With Car, Flees Scene 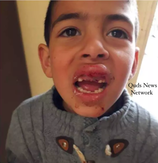 An illegal colonist ran over a Palestinian child in Hebron, in the southern part of the occupied West Bank, Tuesday, and  fled the scene, according to Quds News.

The unidentified colonist struck Omar Ra’fat Salaymah, 6 years old, with his car while the child was on his way home from school in the Salaymah neighborhood.

Palestinian medics promptly transported the child to a medical center in Hebron; his wounds have been described as a moderate.

Such attacks are on the rise, and nowhere is this more evident than in Hebron, where Benjamin Netanyahu cancelled the long standing agreement with the Temporary International Presence in Hebron (TIPH), and forced them out.

On 31 March, 1994, representatives of the Palestinian Liberation Organization and the Israeli government signed an agreement requesting Italy, Denmark and Norway to provide observers to form a Temporary International Presence in the City of Hebron (TIPH).

Article 49 of the 4th Geneva Convention states that the occupying state (Israel) is forbidden to transfer its own population onto the land it occupies (Palestine), therefore under international law, all Israeli settlements are illegal.
16 apr 2019
Soldiers Injure Many Palestinians, Including Schoolchildren, In Hebron

Israeli soldiers invaded, Tuesday, many Palestinians, including schoolchildren, in and around two schools in Hebron city, in the southern part of the occupied West Bank.

They added that the soldiers attacked many Palestinians, protesting the invasion, and fired a barrage of gas bombs, concussion grenades and rubber-coated steel bullets at them.

Media sources said dozens of schoolchildren, and Palestinians in the surrounding areas, suffered the severe effects of teargas inhalation.
Minors among 12 Palestinians detained by Israeli forces

Israeli forces detained at least 12 Palestinians, including minors, across the occupied West Bank, on predawn Tuesday.

In the central West Bank district of Ramallah, another three Palestinians were detained. They were identified as Ragheb Muhammad al-Tamimi, Halal Mamdouh Atta, and Suleiman Salem Qatsh.

In the northern West Bank district of Nablus, one Palestinian was detained. He was identified as Adel Sabah.

In the northern West Bank district of Salfit, another Palestinian was detained and identified as Muhammad Eid Dahdoul.

According to prisoners rights group Addameer, there are 5,450 Palestinian prisoners being held in Israeli prisons, including 205 minors, 32 of whom under 16 years old.
15 apr 2019
Israeli Soldiers Injure Many Schoolchildren And Teachers In Hebron

They added that dozens of schoolchildren and teachers suffered the effects of teargas inhalation, before local medics rushed to the educational facilities, and provided them with the needed treatment.

It is worth mentioning that the schools in that area are subject to daily violations and assaults by the soldiers, constantly stationed at the Abu ar-Reesh military roadblock, west of the Ibrahimi Mosque, and roadblock #60, south of the mosque, in addition to many roadblocks that are repeatedly installed near the schools.
Palestinian child dies of injuries sustained two weeks ago

Palestinian medical sources report that a Palestinian child, Issac Abdul Muti Suwailm Eshteiwi, 16, from Rafah, in the south of the Gaza Strip, died of injuries sustained when he was shot by Israeli forces east of Rafah near the border fence on April 3rd.

After he was shot, the injured boy was grabbed by Israeli soldiers who thrust him into a military vehicle and took him to a military base in Israel.

The Israeli military claimed that Issac and two other children were attempting to escape over the border fence when they were shot.

When the incident occurred, one of the teens suffered fatal injuries when he was shot.

The Israeli military reported that Issac suffered “mild injuries” after he was shot at close range by their sharpshooters, and the third boy was taken onto custody without reported injury.

But he has remained in Israeli custody since being shot, and his family has not been allowed to see him, according to local sources.

His parents were informed on Sunday that Issac had succumbed to his injuries. It is unknown whether further injuries had been inflicted upon him while in Israeli military custody due to “harsh interrogation”/torture.

On the same day that Issac was killed, a 14-year old Palestinian boy was found, after his family had reported him missing for three days, in an Israeli prison.