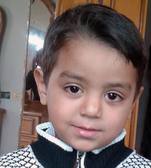 Israeli soldiers continue to practice terrorism and murder against Palestinians; the latest of which was with the shooting of four-year-old child Ahmed Yassen Abu Abed, when an Israeli sniper fired an internationally forbidden bullet at his head.

Abu Abed went out with his father after he insisted on going to the Great March of Return, east of Khan Younis, despite his father’s fear that the occupation soldiers might fire at him, which actually happened.

As soon as they arrived at the Great March of Return east of Khan Younis province in the southern Gaza Strip, accompanied by peaceful demonstrators, a sniper shot the father’s hand with shrapnel hitting the head of his son, who was walking next to him.

The father carried his son, who was bleeding before his eyes, wondering why Israeli snipers targeted the child, assassinating his childhood.

“My child was taken to the hospital in full consciousness,” said the grieving father. “It took moments for the doctors to rush him to the ICU after his condition worsened, losing his life after spending a week at the hospital.”

In their home in the town of Bani Suhaila, east of Khan Younis, the mother received her martyred son with flowers and tree branches, praying that God reward him in heaven.

As soon as the mother sat at the head of her son to take a final farewell look at his face, she began to mumble with words that expressed the pain of her heart.

The mother says: “He told me that he wanted to have a cake, and asked me to make him a one. God have mercy on you, Mama, you asked for a cake and you ate it before being killed.”

“Before he left, he told his father that I would not allow him to go to the border. He insisted on his father to take him and he left the house happy,” she said.

The grieved mother lambasted the Israeli soldiers for killing her son, pointing out that he did not even complete five years of his age.

She wondered about the crime committed by her child who went out to participate in the peaceful marches, demanding the prosecution of the occupation leaders who gave orders to kill her son and the rest of the demonstrators.

Defense for Children International, Palestine said the Israeli occupation forces killed 52 children in the West Bank and the Gaza Strip, since the beginning of this year, 46 of them were in the Gaza Strip.

The group said in a statement that 18 children killed by IOF were shot in the head, nine in the chest, seven in the abdomen and five in the neck, while the rest of shootings were in different areas of the body (shrapnel), which indicates that Israeli soldiers intentionally targeted the upper areas of the body with the intention of killing the children.

Abu Abed died on Tuesday evening (11/12/2018) from wounds sustained during his participation in the Great March of Return on Friday (7/12/2018) east of Khan Younis in the southern Gaza Strip.
Illegal Israeli Colonists Attack School Near Nablus

Ibrahim Omar, the principal of Burin Secondary School, said the school administration had to close the educational facility, and sent the children back to their homes, in fear of further violations.

He added that the soldiers were present in the town during the invasion, and did not attempt to remove the assailants.

The colonists also attacked a number of homes surrounding the school, while the soldiers occupied rooftops of a number of homes, and fired many rubber-coated steel bullets and gas bombs at Palestinians, protesting the invasion.

In Hebron, several schoolchildren and teachers suffered the effects of teargas inhalation, after the army attacked their school in Hebron, in the southern part of the West Bank.
Soldiers Abduct Three Children In Hebron

Israeli soldiers abducted, on Sunday at dawn, three Palestinian children from their homes in the al-‘Arroub refugee camp, north of Hebron city, in the southern part of the occupied West Bank.

The soldiers invaded and violently searched homes in the refugee camp, and interrogated many Palestinians, while inspecting their ID cards, before abducting three children, 13 to 16 years of age.

Furthermore, the soldiers invaded many neighborhoods in Hebron city, in addition to Yatta town, south of Hebron, and Halhoul town, north of the city.

During the invasions, the soldiers searched the homes of Ibrahim Najjar, from Yatta, Yousef al-Baba, from Halhoul, and Wisam at-Teety in the al-Arroub refugee camp.

The soldiers also installed many roadblocks in various parts of Hebron governorate, especially main roads leading to towns and refugee camps, before stopping and searching dozens of cars, and interrogated many Palestinians while inspecting their ID cards.
ISM Report: Child Abductions by Israeli Forces in Hebron, 4-11 Dec 2018 (VIDEO)

7 children were abducted on 3 different days in the Qeitun and Salaymeh neighbourhoods of al Khalil (Hebron) so far in December. ISM activists were present on these 3 occasions and this report contains video footage from all 3 incidents.

Location: Qeitun / Salaymeh neighbourhoods.The area where these abductions occurred are in the centre of Hebron a short distance to the south to the Ibrahimi Mosque. Here, the two roads to Tareq Ibn Ziad shopping area are blocked by Qeitun Checkpoint and Salaymeh Checkpoint.

Qeitun checkpoint is also know as Abu Rish Checkpoint. Salaymeh is also commonly called Checkpoint 160. To make matters confusing there are also other names and Palestinian and Israeli authorities have different numbering systems for them. For simplicities sake I call the checkpoints and the neighbourhoods to the south of them as “Qeitun” and “Salamyeh”

The town roads running south form the checkpoints are in a narrow part of the valley with one block (about 200m) between them. So the area is very small with steep hills ascending on either side.

Abductions:4 December, 2018 There were two incidents on the 4th December, on the parallel streets leading from the checkpoints of Salaymeh (checkpoint 160) and Qeitun (Abu Rish).

Israeli soldiers abducted, on Saturday at dawn, four Palestinians, including a former political prisoner and a child, in occupied East Jerusalem.

The Palestinian Prisoners’ Society (PPS) has reported that the soldiers ambushed a former political prisoner, identified as Rami al-Fakhouri, in Wadi al-Jouz neighborhood, in the Old City.