The Bethlehem office of the Palestinian Prisoners Society (PPS) has reported that the soldiers invaded the city, and several surrounding towns and refugee camps, and abducted eight Palestinians, including three political prisoners.

In Ramallah, the soldiers abducted seven Palestinians, including a child and three young women, after invading their homes and searching them.

Furthermore, the soldiers abducted six Palestinians from their homes in different parts of the southern West Bank district of Hebron.

One Palestinian, identified as Hasan Daraghma, was abducted from his home in Tubas, in the northeastern part of the West Bank.

The PPS said that some of the abducted Palestinians are former political prisoners, who spent years in Israeli detention and interrogation centers.
45 children, 22 women among 405 arrests reported in February

Israeli Occupation Forces (IOF) arrested over the past month nearly 405 Palestinians, including dozens of women and children, in the occupied West Bank and the blockaded Gaza Strip, Quds Center for the study of Israeli and Palestinian affairs said Wednesday.

45 Palestinian children and 22 women were among the reported arrests, the center said in its monthly report.

According to the report, the biggest number of arrests was reported in occupied Jerusalem, where 84 Palestinians were taken into custody.

Israeli forces also arrested 82 Palestinians from al-Khalil, 63 from Bethlehem, 50 from Ramallah and el-Bireh, 43 from Nablus, 25 from Qalqilia, 16 from Jenin, 9 from Tulkarem, and 6 from each of Tubas and Salfit.

During the reported period, Israeli forces arrested 11 Palestinians from the Gaza Strip including five fishermen.

The report said some 45 children including a 12-year-old child and 22 women were among the 405 detained citizens in the West Bank and Jerusalem in February.
28 feb 2017
Minors, girls among 7 arrests reported in West Bank 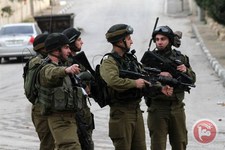 In the northern district of Qalqiliya, PPS said that 24-year-old Said Ziyad Abu Haniyeh was detained in the town of Azzun, and that Israeli forces detained 24-year-old Abdullah Muhammad Shatat in the village of Biddya in the central Salfit district.

An Israeli army spokesperson confirmed two detentions were made in Husan, as well as one in Biddya and one in Azzun.

The army spokesperson did not confirm, however, the detention of 17-year-old Mahmoud Muhammad Sarsour in Qaddura refugee camp in the central occupied West Bank district of Ramallah, as reported by PPS.

Israeli forces carry out detention raids across the occupied Palestinian territory on a near-nightly basis, with the UN recording an average of 95 weekly raids in the West Bank in 2016, and 100 weekly raids on average thus far in 2017.

According to prisoners’ rights group Addameer, 6,500 Palestinians were being held in Israeli prisons as of January, including some 300 minors.
22 feb 2017
Five children who got longer sentences for throwing stones than Israeli soldier who shot incapacitated Palestinian dead

'If [a Palestinian] kills an animal... he would have gotten more time,'  family of deceased man says

An 18-month jail sentence handed down to an Israel Defence Force (IDF) recruit for the killing of a wounded Palestinian has prompted widespread criticism for its apparent leniency in light of the severity of his crime.

Then 19-year-old medic Elor Azaria was found guilty of manslaughter for fatally shooting 21-year-old Palestinian knife attacker Abdel Fattah al-Sharif in the head after the assailant had already been disarmed and injured in an incident in Hebron last year.

The killing was recorded by an onlooker using a mobile phone in footage that was widely shared by Israeli human rights group B’Tselem.

While prosecutors sought a term of between three and five years in jail, Azaria was given 18 months in prison, 12 months' probation, and was demoted from Sergeant to Private. Manslaughter is punishable by up to 20 years in prison under Israeli law.

The ruling was a landmark case insofar as no member of the IDF has been prosecuted for actions carried out in uniform in over 12 years.

However, Palestinians and rights activists have widely criticised the punishment as not severe enough.

It is possible that Azaria could walk free after serving 12 months of his sentence, and there have been several high-profile calls for the young recruit to be pardoned altogether.

His lawyers' claims of self-defence are supported by 65 per cent of the Jewish Israeli public, an August 2016 survey by the Israel Democracy Institute found.

Al-Sharif’s father Yusri told reporters from his home in the West Bank that the family had never expected the Tel Aviv military court “show trial”  to do the deceased man justice.

“Even though the soldier was caught on video and it is clear that this is a cold-blooded execution, he was convicted only of manslaughter, not murder, and the prosecution asked for only a light sentence of three years.

“The sentence he received is less than a Palestinian child gets for throwing stones.”

The family’s comments are not hyperbole. In 2015, Israeli Prime Minister Benjamin Netanyahu’s cabinet established a mandatory minimum penalty of four years in prison for those who "endanger human lives by throwing stones, fire-bombs and explosives".

The temporary measure, expected to last until 2018, came into force after an Israeli man died in a car crash linked to a stone-throwing incident.

Under military law, Palestinian rights group Addameer says, throwing stones can be punishable by up to 20 years in prison.

Just a handful of people imprisoned under the new stone-throwing legislation who were handed down longer sentences than Azaria, include five boys from east Jerusalem who were sentenced in March last year for throwing stones at cars:


In addition to the above five, in the same trial, 14-year-old Omar Rani Yaseen received a one-year sentence, and Yazan Hani Ayoub, whose age was not given, was given  one year and two months in prison.
20 feb 2017
Israel sentences Palestinian child to 3 months in prison

A fine of 3,000 shekels was also imposed on the child, the Palestinian Prisoners Society (PPS) said.

The court gave his family a year as a deadline for paying the fine, according to the sources

Khadour was detained on January 2, 2017 despite being previously diagnosed with blood cancer, and currently suffers from partial seizures and right hand paralysis.
16 feb 2017
MOH: 7.8% of cancer cases in Palestine are children

The Palestinian Ministry of Health (MOH) reported that children with cancer represent 7.8% of all cancer cases registered in Palestine, adding that the rate of cancer in Palestine reached 83.8 new cases per 100,000 persons.

MOH said in a press conference on the International Childhood Cancer Day on Wednesday (15/2/2017) that 59.3% of cancer cases were reported among male children, and the rest were among females.

Third of them are under the age of five

Dr. Jawad al-Bitar, Head of the Information Center at the Ministry of Health, said that 31.7% of the cancer cases in Palestine are among children under the age of five.

Leukemia is ranked first with a rate of 30.2% followed by brain and nervous system cancer with a rate of 18.5% of the total cancer cases registered in Palestine, he added.

These five types of cancer represent about two-thirds of the cancer cases recorded among children in Palestine, with a rate of 66.1%.

Different types of cancer were reported as well such as lymphoma cancer, Wilms tumor, intraocular melanoma, endocrine cancer, bone cancer and liver cancer in addition to rare cases of other types of cancer.

Al-Bitar pointed out that the mortality rate among children with cancer compared with all cancer cases in Palestine reached 3.8% while the rate of children who died because of cancer under the age of five reached 26.8%.

Dr. Jawwad Awad, Minister of Health in the West Bank, said that Huda al-Masri section was opened in Al-Hussein Hospital in Beit Jala to stress the importance of cancer diagnosis and treatment with the world's most advanced techniques in this field, which form a major glimmer of hope for the diagnosis and treatment of Palestinian children who have cancer.

Palestine Children Relief Association has opened the first department dedicated to children cancer patients in Palestine, and in 2013 it was formally opened by the Palestinian Authority. The section aims at providing the necessary and specialized care for children cancer patients from all over Palestine, where the medical staff work to save their lives and relieve them from their pain, Awad added.

Huda al-Masri section is considered to be the heart of Khaled Al-Hassan Cancer Treatment Center, adding that the medical staff is highly qualified which will gain for Khaled Al-Hassan center huge success.

This project will help our children who suffer from tumors from the ages of one to 12, according to Dr. Awad.

February 15th marks the International Childhood Cancer Day, which aims at raising public awareness about childhood cancer, expressing support for children and teenagers with cancer and working to increase appreciation and understanding regarding the issue of challenges related to childhood cancer. Most importantly, this day aims at improving access to cancer treatment and medical care especially that around 80,000 children die every year because of cancer around the world.

A report recently released by the International Agency for Research on Cancer (IARC) said that the children's cancer percentage might be much higher than previously thought. The report is based on more than a hundred cancer registries in 68 countries from 2001 to 2010 in which it indicates that 300,000 juveniles under the age of 18 were diagnosed with cancer.

Furthermore, statistics for the World Health Organization indicate that 80% of children with cancer live in developing countries.
Israeli Soldiers Abduct Ten Palestinians In The West Bank

In addition, the soldiers abducted three Palestinians from their homes in ‘Azzoun town, in the northern West Bank district of Qalqilia.

The Tulkarem office of the PPS said the soldiers invaded Shweika area, north of the city, searched homes, and abducted Morad Monir Mahdawi, 26.