Israel’s Salem military court on Wednesday extended the detention of 17-year-old Ahmed Issa, from Jenin, until next Monday and refused a request to release him due to his injury.

According to a lawyer from the Palestinian Prisoner Society (PPS), Issa is still in Ha'emek hospital receiving treatment for injuries he sustained after an Israeli military jeep ran over him in January 3rd.

The teenager has not attended any court hearing because of his bad health condition.
25 jan 2017
Israeli forces detain 34 Palestinians in West Bank during predawn raids

Israeli forces detained at least 34 Palestinians, including a 12 and 17-year-old, during predawn military raids throughout the occupied West Bank on Wednesday, according to Palestinian and Israeli sources.

Israeli forces carry out detention raids across the occupied Palestinian territory on a near-nightly basis, with the UN recording an average of 95 weekly raids in the West Bank in 2016.

According to prisoners’ rights group Addameer, 7,000 Palestinians were detained in Israeli prisons as of October 2016.

An Israeli army spokesperson confirmed to Ma’an two detentions in Beit Annan and another in Biddu.

In the Ramallah and al-Bireh districts, Israeli forces detained six Palestinians, according to PPS.

An Israeli army spokesperson did not mention any detentions in Ramallah and al-Bireh.

PPS said in their statement that one Palestinian was detained from the village of al-Khader in the Bethlehem district, identified as Ibrahim Suleiman Sbeih, while Nidal Andunieh, and his son Amir were detained from the city of Bethlehem.

An Israeli army spokesperson told Ma’an that one Palestinian was detained in Bethlehem.

Locals told Ma’an that Israeli forces raided the village of Dura and detained Izz al-Din Jamil al-Titi from his home.

The wife of Palestinian journalist and hunger striker Muhammad al-Qiq was delivered an interrogation summon with Israeli intelligence during the raid, according to locals. Al-Qiq was redetained by Israeli forces earlier this month after participating in a protest in Bethlehem held to demand the release of bodies of slain Palestinians held in Israeli custody.

An Israeli army spokesperson told Ma’an that two additional detentions were carried out in the al-Fawwar refugee camp in Hebron. Palestinian sources did not provide details on the detentions.

In Qalqiliya, an Israeli army spokesperson told Ma’an that four Palestinians were detained. Palestinian sources did not provide additional information.

Meanwhile, according to PPS, Israeli forces detained two former Palestinian prisoners in the Jenin district, identified as Saddam Muhammad Yassin from Anin village and Ismail al-Kilani from the village of Yaabad.

An Israeli army spokesperson told Ma’an that three Palestinians were detained in Jenin. However, Palestinian sources did not provide information on the third detention.
24 jan 2017
A martyr who foiled Israeli intelligence plots

Some might accept spying for the enemy under certain conditions, but this very notion does not exist in Ahmed Shubair’s dictionary, who considers it a betrayal and a violation of human dignity. “The struggle between death and life” was the fear that controlled Ahmed’s mind for two years, but he finally took his decision to die “standing like trees.”

“Daddy, in brief, they asked me to spy for them. I told them I prefer to die in Gaza over selling myself at a cheap price for them, and to harm my people and cause,” was the conclusion of 12 hours of interrogation the 17-year-old Ahmed Hassan Shubair spent inside the Israeli intelligence room, pressuring him to spy for them in return for allowing him to get needed medication, or else he would return to Gaza and die there.

Ahmed could not have the surgery he needed for the last few months and passed away, and with his death, he proved to be an example of honesty and wrote his name in history as a loving-person for his homeland, to be called the martyr of the siege.

Shubair suffered from congenital heart defects since he was born. He traveled 40 times for medication purposes, yet his attempts to travel recently have been faced with Israeli permit denial, after the Israeli intelligence officers failed to pressure him to work as a spy for them, and thus choosing to die in Gaza over working as a traitor for the Israeli occupiers.

The story of the child was repeated with his father. The Israeli occupation tried to pressure Ahmed’s father to work as a spy for them, but he refused, using his son’s need for medication. Hassan, Ahmed’s father, replied to the intelligence officer’s offer by saying, “As you care about your state, I care about my country and my people.”

Hassan Shubair, telling the PIC of the details of the death of his son Ahmed, said, “Since my son was born, he suffered from four heart defects, but he was always patient and hopeful that he will recover eventually. He lived his life on hope and he used to travel to Israeli hospitals from time to time to get needed medication.”

Ahmed used to get medication in the past without facing any problem, but the last two years have been difficult for him. In 2015, his journey with suffering started and the Israeli occupation officers started bargaining Ahmed to work for them as a spy, making his life and the life of his family even harder.

Ahmed’s father explains, “The first time the Israeli intelligence offered Ahmed and his mother to spy for them was on 22 March 2016. The Israeli occupation pressured them and offered them medication in return for spying, but they refused. They were eventually allowed to travel.”

Ahmed’s father continued, “After the return of Ahmed and his mother to Gaza, they travelled again on 18 April 2016. The doctors set an appointment for them in September 2016 to have an open-heart surgery, but when they applied for permits to have the needed surgery, they were surprised to get rejection.”

On 10 October 2016, the parents took their sick child to the Israeli-controlled Erez Crossing to the north of Gaza to have an interview upon the request of the Israeli intelligence, starting a new stage of bargaining to pressure him to get medication in return for spying for them.

During the interview, which lasted for 12 hours, the Israeli intelligence tore down Ahmed’s medication permit in an attempt to pressure him to spy for them, and asked him questions about members in the Palestinian resistance groups, and his neighbors and friends, according to his mother.

The mother told the PIC, with her eyes full of tears, “My son refused considerable offers from the Israeli intelligence agents, who left him alone for long hours to psychologically pressure him, yet he was patient and sought God’s help.”

Ahmed’s mother pointed out that the Israeli intelligence officer offered her to work as a spy for them in return for allowing her son to get needed medication, but she firmly refused this offer, saying: “I am a house wife and I am not involved in such things, and my goal is to get medication for my son to recover just like the rest of the children of the world.”

The mother recalls her son’s dream before passing away when he told her that he “wishes to live six more months to get the high school certificate.” She continued, “He dreamed of becoming a heart doctor to help others like him,” yet after the last interview with the Israeli intelligence all doors were shut down in his face, and his health condition got worse until he passed away on 14 January 2016 after he performed the Dawn prayer and read Al-Kahf Chapter in the holy Quraan, and after we chatted with each other and after he helped me with the laundry.” 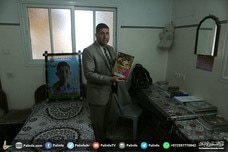 A Palestinian human rights report has revealed that there is an increase in the number of deaths among Palestinians in Gaza due to entry denial by the Israeli authorities, especially those planning to travel to the West Bank, Jerusalem and the 1948 Territories.”

Al-Mezan Center for Human Rights has revealed in statement that since the beginning of 2016, the number of Palestinians denied permits to cross the Erez Crossing to reach out to hospitals has increased, with 50% to 60% of them cancer patients.