Morad Eshteiwi, the media coordinator of the Popular Committee against the Annexation Wall and Colonies in Kufur Qaddoum, said the soldiers invaded the home of Nabil Ali, violently searched the property and abducted his child, Tareq, only 14 years of age.

Eshteiwi added that the soldiers repeatedly assaulted the child, causing various cuts and bruises, before adducting him.

Israeli soldiers invaded, on Sunday at dawn, the al-Jalazoun refugee camp, north of the central West Bank city of Ramallah, searched homes and abducted a young man and two children.

Media sources said the soldiers abducted Raed al-Beyari, 18, in addition to Qussai Barakat, 15 and Sultan al-‘Ammouri, 15, and took them to an unknown destination.

The soldiers also invaded the home of Saed al-Masri and summoned one of his sons for interrogation.

The Israeli occupation forces (IOF) on Saturday afternoon ambushed a Palestinian child from Kafr Qaddum town in Qalqilya, north of the West Bank, and rounded him up on the outskirts of the town.

Local sources told the Palestinian Information Center (PIC) that Israeli soldiers waited in ambush for 15-year-old Hamza Mustafa and kidnapped him in an olive grove.

The sources added the soldiers assaulted local citizens during their presence in the area and obstructed traffic at the main entrance to Kafr Qaddum town for hours during the day.
7 june 2018
Army Abducts Four Palestinian Children In Jerusalem

Israeli soldiers abducted, on Wednesday evening, four Palestinian children near the New Gate, of the old city of occupied Jerusalem, and moved them to an interrogation center.

Khaldoun Najm, a lawyer with Wadi Hilweh Information Center in Silwan (Silwanic) said the soldiers assaulted and injured the four children, before abducting them.

Najm added that the children were taken prisoner after an Israeli colonialist settler assaulted them near the New Gate.

Israeli officers arrived at the scene, and attacked the children before abducting them, and took them to the Police station in Salaheddin Street, instead of detaining the colonialist settler who assaulted them.
6 june 2018
Parole board rejects Tamimi request for early release

Board cites Ahed Tamimi's 'lack of regret, the severity of the offenses and an assessment of the danger she poses' as reasons not to cut her sentence by a third; the Palestinian teen provocateur was jailed for 8 months for assaulting an IDF officer and soldier.

The Israel Prison Service's parole board on Wednesday rejected a request by Palestinian teen provocateur Ahed Tamimi, who is serving eight months in prison for the assault of an IDF officer and soldier, to cut a third of her sentence.

In explaining its decision, the board cited a "lack of regret, the severity of the offenses and an assessment of the danger she poses."

Ahed Tamimi, 17, and her cousin Nur Tamimi, 21, were filmed hitting a company commander and a soldier during clashes between Palestinians and IDF forces in the village of Nabi Salih in the central West Bank.

Ahed Tamimi, incarcerated since December 19, was charged with assaulting the officer and soldier, attacking members of the security forces in five other incidents, stone throwing, participation in clashes, threats and incitement. Her cousin Nur was charged with aggravated assault of a soldier.

As part of a plea deal, Tamimi pled guilty to four of the charges in the indictment: the assault on the officer caught on film, incitement and two prior instances of disrupting IDF soldiers.

She was sentenced to eight months in prison and ordered to pay a NIS 5,000 fine.

A Shin Bet assessment of the danger she poses noted that "the comments she made on the matter show the radical ideology she holds. That, combined with the current security situation, present an indication of the potential danger she may pose if released early."

The state opposed Tamimi's early release, stressing she continues posing a threat and has shown no remorse for her actions. Furthermore, Tamimi has not undergone any treatment while in prison. The state also submitted classified documents to the court related to "negative activity" during her incarceration.

Tamimi's attorneys, meanwhile, tried to justify her actions and argued she should not suffer because of the volatile situation on the Gaza border.

"We cannot ignore the Shin Bet's assessment, the severity of the offenses attributed to the prisoner and mostly the circumstances and the insistence of the prisoner that she would continue acting as she did and does not regret her actions. It is for those reasons that she continues posing a danger," the board wrote.
5 june 2018
IOF arrests child and his father in al-Khalil

The Israeli occupation forces (IOF) on Tuesday evening arrested a Palestinian citizen and his child in al-Khalil, south of the West Bank.

The PIC reporter said that the IOF arrested Hussein al-Nahnoush and his 8-year-old son Samer in Wad al-Husain neighborhood east of al-Khalil city.

Meanwhile, hordes of Israeli settlers stormed Beit Einun village, north of al-Khalil, and stayed there for hours under the protection of the IOF soldiers.

In a related context, a local source reported that the IOF on Tuesday arrested two Palestinian youths from Nablus and Qalqilya and detained others at Salem military camp, west of Jenin, while they were heading to Salem military court to attend trials of their relatives.
Israeli Soldiers Abduct Fourteen Palestinians In The West Bank

Israeli soldiers abducted, on Tuesday at dawn, at least fourteen Palestinians, including a member of the City Council in Hebron, and shot one Palestinian in several parts of the occupied West Bank.

The soldiers invaded many communities in the West Bank, searched many homes, and abducted at least twelve, after interrogating them and their families.

In addition, the soldiers installed many roadblocks, especially in Hebron, in the southern part of the West Bank, while the army claimed that its soldiers located homemade weapons in Doura town.

One of the abducted Palestinians is the brother of Ameer Omar Shehada, 22, who was killed by Israeli army fire on March 10, 2018.

The soldiers also invaded the Deheishe refugee camp, south of Bethlehem, and shot a young Palestinian man, in his twenties, with a live round in his thigh, during protests that took place after the soldiers stormed and violently searched many homes.

In Teqoua’ town, southeast of Bethlehem, the soldiers summoned a child, identified as Ahmad Fahed Abu Mfarreh, 15, for interrogation in Etzion military base and security center, northern of Bethlehem, after abducting his father Fahed, 47, in addition to Hussein Khaled Abdul-Khalil, 19, Mohammad Khaled Hajahja, 19.

The bulldozed lands are in the same area where the colonizers installed an illegal colonialist outpost, several months ago, before it was removed. 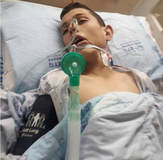 The health condition of a Palestinian detainee held in Israeli jails, Hassan Al Tamimi, aged 16, has seriously deteriorated on Sunday, due to medical negligence.

The Palestinian Prisoner’s Society (PPS) said, in a statement, that the health condition of Al Tamimi is extremely bad, adding that Israeli occupation authorities are rejecting to hospitalize him, under the pretext of financial aspects.

PPS added that this move aims at blackmailing the family of the child and puts him at risk of losing life.

PPS holds Israeli authorities fully responsible for the life of the detainee, calling upon international and lawful institutions to share in the responsibility and to pressure the occupation to provide Al Tamimi with the required medication and immediate treatment, in order to save his life.

It is worth mentioning that the Israeli army detained Al Tamimi two months ago, violently interrogating him and barring him from the required medication to maintain his health condition.
Israel’s settler gangs open fire near Bethlehem school

Israeli settlers on Monday morning opened fire in the vicinity of a Palestinian elementary school east of Bethlehem province, in the southern occupied West Bank, causing panic among schoolchildren.

According to anti-wall activist Hasan Brijiyah, a gang of Israeli settlers approached al-Tahadi School in the area of Beit Taamer, to the east of Bethlehem, while workers were opening a road to facilitate students’ access to the institution, before they opened fire in the air, terrorizing the children.

Brijiyah described the assault as an act of bullying aiming to terrorize the locals and force Palestinian students out of the school.

The targeted school had reportedly been demolished by the Israeli occupation authorities on more than one occasion in favor of projected settlement plans.
Palestinian children in Israeli jails sound alarm over torture

Palestinian minors held in the Israeli Megiddo prison have launched distress signals over the systematic torture and harsh treatment they have been made to endure at the hands of Israel’s suppressive units.

Lawyer Heba Musalha, from the Prisoners’ and Ex-Prisoners’ Commission, quoted the minors as stating that they have been enduring heavy beating and mistreatment by the Nahshon forces during inter-prison transfers.

Signs of aggressive beating figure on the faces and bodies of the minors, said the lawyer.

The minors have frequently appealed to the Israeli prison service to cease such preplanned oppressive polices. However, their pleas have gone unheeded.

The Nahshon suppressive units are Israeli troops involving trained soldiers and tasked with cracking down on Palestinian detainees, particularly during transfers to and back from Israeli courts.

The Nahshon officers often subject the detainees to strip searches and ransack prison sections under the security guise.
3 june 2018
Israel Collected 100.000 Shekels In Fines From Palestinian Children In May

The Palestinian Detainees’ Committee has reported that Israeli courts have collected, in May, more than 100.000 Shekels in bail and fines, imposed on detained Palestinian children, held in Ofer Prison, near Ramallah, in central West Bank.

In a report released on Sunday morning, the committee stated the soldiers have abducted twelve children in March and sent them to the children’s section of Ofer prion.

It added that twelve of the children were taking prisoner during violent Israeli army invasions and searches of homes, while eighteen were taken from the streets, one after stopping him at a military roadblock, and one was abducted for entering Jerusalem without a permit.

The Committee also stated that two of the detained children were shot before the soldiers abducted them, and ten others were repeatedly attacked by the army, in addition to being tortured during interrogation.

37 of the imprisoned children have already been sent to military courts and were sentenced to prison terms varying between three and twenty months in prison.

The Committee said the courts have imposed fines amounting to at least 100.000 Shekels, punishing the imprisoned children and their families.