On Wednesday, 21 August 2014, the Reify family was targeted in their agricultural land located in El-Daraj neighborhood, a densely-populated area of Gaza city.

The incident happened on the forty fifth day of the war when many members of the family were together in their land, playing, planting and eating, like any other day. The Israeli attack resulted in the killing of 7 family members, including 5 children, and injury of a man and child.

Mohamed Naser el-Reify (11), victim of this attack, lost his twin brother, Omar; his father; uncle and cousins. Mohamed himself was left as well with severe psychological and physical problems. His childhood memories changed from playing on the street to lying on the hospital bed and being unable to move.

His body was paralyzed from after sustaining a fracture in the bone marrow, while he breathes through tracheostomy tube.

Mohamed is currently staying at Al-Wafa hospital, in Al-Zahra, South of Gaza city, where he receives his physiotherapy treatment. However, he doesn’t feel any progress, neither in Gaza hospitals nor in Jerusalem, where he was also treated before.

“I wish I could receive proper treatment and get better soon.” He strongly believes that time matters and everything is possible with patience. “All I want is to go home and be able to sit with my family,” Mohamed adds.

As Mohamed is unable to attend school, he receives education at the hospital, as his teachers come to give him private lessons.

His favorite subjects at school are history and geography because “History teaches us about the past and geography teaches us about the world we are living in.” Being unable to attend classes and be with friends at school, Mohamed said in tears “I miss my old school, old friends and family.” Like many other children, he had dreamed of growing up and becoming a successful engineer. “Knowing that I am unable to do that now makes me sad,” Mohammed describes.

Mohamed tries not to remember the incident, as it brings back horrible memories. He wants the incident to be erased from his memory due to the severe suffering he has experienced. Following the attack, Mohamed’s speaking ability was affected for 6 months as a result of the shock, and he had to stay in the Intensive Care Unit (ICU) in the hospital for half a year.

Mohamed and his family have lost strong emotional support when they lost his father. As the main breadwinner of the family is not here anymore, the responsibility of supporting the family is under difficult circumstances now as it falls on the shoulders of the mother. Mohamed wants the world to know his story and asks anyone, who has the ability to help victims of such attacks to do so. “I wish for all kids in the world to be in good health and able to enjoy their childhood,” Mohamed adds.

The Israeli human rights violations and war crimes against Palestinian civilians and property lasted for 50 days in 2014 – 50 days of bombing by air, sea and land throughout the Gaza Strip.

As a result, 2,216 Palestinians were killed, 70% of whom were civilians, including 556 children and 293 women. The Israeli use of excessive force against civilians and property, including indiscriminate shelling and systematic destruction, completely destroyed entire residential neighborhoods and families.

Today, 65,000 who were displaced during the offensive are still homeless, while the reconstruction process progresses too slowly.

“Stop the war on our children’s minds.”

The conference took place in the Grand Park Hotel on the 15th and 16th of March.  For two days, Palestinian and international speakers made an assessment of the problem and ex-detainee children told their story. The goal was to join forces in formulating a national and international strategy to end the demolition of our youth’s childhoods.

“It is our responsibility to end the war on our children. The international community must stand as one human rights council and hold Israel accountable.” This is how Prime Minister Dr. Rami Al Hamdallah opened the event. It was basically the message of the conference in a nutshell, according to the PNN.

The Israeli occupation detained and interrogated 1,300 Palestinian minors last year alone. More than 300 children are in prison right now and subjected to torture, unfair trials by illegal military courts and sentencing based on ‘secret evidence’. The number of arrests has almost doubled the last two years, and the interrogation methods got harsher. The need for such a conference was urgent, but not as urgent as the need for action and support from the international community.

Speakers described the Israeli detention policies and their international law violations. A panel of psychiatrists explained the effects on the mental health of the children. A group of liberated children even told about their horrible experiences: stories about scare tactics using dogs, severe beatings and refusal to administer insulin to a diabetic to make him confess.

The conclusion was that the systematic arrests of children, the abusive interrogation methods and the harsh sentences for very minor offences are part of a very deliberate strategy. Not a strategy to improve security or obtain information, but to break the spirit of a generation.

At the end of the conference a national strategy and an international campaign was launched. The main message to the international community was to put more pressure on Israel to stop their violations of international law and human rights. The European Union in particular was called upon to activate article 2 of the E.U.-Israel Association Agreement, the free trade agreement between both parties. . This stipulates that respect for human rights and democratic principles is an essential element for trade between them, and Israel is in clear violation of this. Since the E.U. is Israel’s most important trade partner, it could be an important diplomatic weapon to persuade Israel to comply.

Mr. Akram Alayasa, from the Commission of Detainees & Ex-Detainees Affairs, had this message for the children of Aida Camp, who face imprisonment and violence from the occupation every day:

“We try to keep your child spirit alive, and I’m sorry if we didn’t do what we were supposed to do…”

The Israeli Occupation Forces (IOF) brutally attacked on Tuesday morning a 15-year-old boy before being arrested and taken to an unknown detention center.

The boy Yazin Amer was detained at a military checkpoint while on his way to school in al-Khalil after being severely beaten by Israeli forces, local sources affirmed.

A similar raid was carried out in Jabal Abu Roman area where a young man was arrested from his house.
PPS: “Israeli Soldiers Abduct 19 Palestinians In The West Bank” 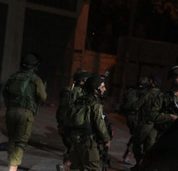 The Palestinian Prisoners’ Society (PPS) has reported that Israeli soldiers abducted, overnight until early morning hours, Tuesday, at least nineteen Palestinians, including children, in different parts of the occupied West Bank, after invading their homes and violently searching them.

The Bethlehem office of the PPS said the soldiers abducted four Palestinians in villages and towns in the district.

In occupied Jerusalem, the soldiers also invaded and searched homes, and abducted Khalil Tafakji, an expert in maps and Israeli colonies, who works with the Orient House, north of the city.

Two Palestinian children, identified as Mo’men Ma’moun Mheisin, 15, and Ismael Tawfiq Mheisin, 17, were abducted from their homes in the al-‘Eesawiyya town, in Jerusalem, after the soldiers broke into them and searched them.

In Nablus, also in the northern part of the West Bank, the soldiers abducted Assem Mustafa Shonnar.

In addition, the soldiers abducted Abdul-Khaleq Burnat, 17, from his home in Bil’in village, west of Ramallah, in central West Bank.

Dozens of Israeli soldiers abducted, overnight and at dawn Monday, eleven Palestinians, including two children, in Silwan town, south of the Al-Aqsa Mosque, in occupied Jerusalem. One Palestinian was abducted near Jenin, in the northern part of the occupied West Bank.

Media sources said the soldiers invaded and violently searched many homes, in various neighborhoods in Silwan, and abducted the eleven Palestinians, before moving them to interrogation and detention centers, in Jerusalem.

In addition, the soldiers invaded Qabatia town, south of the northern West Bank city of Jenin, and abducted a young man, identified as Tareq Maher Zakarna, who works with the Civil Defence in Jenin, after breaking into his home and searching it.
11 mar 2017
Protest in Bil’in attacked by Israeli troops; two civilians abducted, including a child

A weekly non-violent demonstration against the Israeli Wall and settlements in Bil’in village in the central West Bank was met with a massive show of force by the Israeli military, who fired tear gas canisters at children and blocked international observers from entering.

Two people were abducted by Israeli forces: 14-year old Khader Abu Rahma, who was photographed cowering in a grove of olive trees while Israeli troops stood above him, heavily armed; and Majdi Abu Rahma, 32, who was taken from his car, and his vehicle was seized.

The local coordinator of the Popular Committee Against the Wall and Settlements, Abdullah Abu Rahma, told reporters that the Israeli soldiers installed checkpoints at the three roads leading into the village of Bil’in, blocking international observers and supporters from entering the village for the protest.

The checkpoints prevented anyone from entering the village, whether they were going there to pray at the mosque, be with family, engage in commerce or support the non-violent demonstrators.

The villagers gathered near the center of town after mid-day prayers, and began their march down to the site of the Wall constructed in violation of both international law and an Israeli High Court ruling, right in the middle of land owned by residents of Bil’in.

During today’s protest, the marchers held up pictures of Basel al-Araj, who was killed by Israeli forces in Ramallah this week.

When they reached the gate in the Wall, Israeli troops in jeeps and armored vehicles were lined up in firing position.

The protesters chanted slogans in support of Palestinian hunger strikers, chanting the names of Jamal Abu al-Leil, who has been on hunger strike for 22 days, and Mohammad al-Qiq, who ended a 32-day hunger strike on Friday.