The child remains motionless, and the man is heard once again saying, “just don’t shoot her, cuff her…,” then he started shooting at the child, “just don’t move, remain as are, stay still.” Then the officers are seen cuffing the child, and a voice is heard saying “she has a knife in her bag.”

Many Palestinians have been recently killed just because the soldiers suspected they “intended to carry out a stabbing attack,” without even attempting to attack anybody. Her name remained unknown until the time of this report.

People witnessing the unfolding events said they were so concerned that the child was about to be killed although she was motionless, because the soldier kept aiming his rifle at her, while standing in a shooting position, ready to pull the trigger at any second.

In related news, the soldiers abducted a young man, identified as Mohammad Awad, from Aqbat as-Saraya, in the Old City of occupied Jerusalem, and moved him to an unknown destination.

Israeli policemen rounded up the Palestinian minor, who was wearing school uniform, and took her to an investigation center in Occupied Jerusalem.

The Israeli police alleged that a knife was found in her possession.
18 may 2017
Soldiers Abduct A Palestinian Child In Qalqilia

The soldiers broke into and violently searched several homes, interrogated a number of Palestinians while inspecting their ID cards, and abducted one child.

Locals identified the abducted child as Qais Abdul-Rahman Ali, 15, and added that the soldiers cuffed and blindfolded him, before moving him to an unknown destination.
15 may 2017
Israeli Soldiers Abduct Two Child Siblings In Jerusalem

The two children, identified as Jamal and Mohammad al-Ghoul, were moved to an interrogation center in the city, after the soldiers searched their home.

It is worth mentioning that Silwan witnessed extended clashes between local youngsters and Israeli soldiers, invading several parts of the town.

The invasions were focused in Ein al-Louza neighborhood, and the soldiers fired dozens of gas bombs and concussion grenades, many of them targeting homes, and causing dozens of Palestinians, including children, to suffer the severe effects of teargas inhalation.
Israeli Navy Abducts Six Palestinian Fishermen In Gaza

The navy fired many live rounds at the Palestinian fishing boats while they were less than four nautical miles from the Sudaniyya Sea, and abducted three siblings from their boat.

The abducted fishermen have been identified as Mohammad Abu Warda, 27, his brothers Yousef, 22, and Hussein 14. The three siblings and their boat were taken to the Ashdod Port. 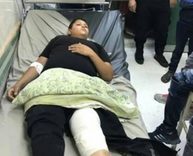 Israeli soldiers invaded, on Sunday at dawn, the Jenin refugee camp, in the northern West bank city of Jenin, shot and injured two Palestinians, and abducted three others.

The soldiers stormed and ransacked homes during the invasion, and interrogated many Palestinians, before abducting three, identified as Mohammad Mahmoud ‘Ararawi, 17, Yassin Ali ‘Ammouri, 18, and Mohammad Mustafa Abu Jilda, 18.

The invasion led to clashes between the soldiers and local youngsters, who hurled empty bottles and stones at the military vehicles, while the soldiers fired many live rounds, rubber-coated steel bullets, and gas bombs.

Israeli soldiers invaded, on Sunday morning, the Jenin refugee camp, in the northern West Bank governorate of Jenin, shot and injured one Palestinian, and caused many so suffer the effects of teargas inhalation, before abducting a young man.

The soldiers broke into and ransacked many homes in the refugee camp, and harassed several Palestinians, leading to clashes.

One Palestinians, Yazan Mohammad Ja’aysa, 20, was shot with a live round fired by the soldiers, while many Palestinians suffered the severe effects of teargas inhalation.

Medical sources said Ja’aysa was shot with a live round in his leg and is currently in a moderate-but-stable condition. He was moved to the Jenin governmental hospital for treatment.

Furthermore, the soldiers assaulted Yassin al-‘Ammouri, and his family, while searching and ransacking the property, and abducted him.
9 may 2017
Israeli Soldiers Abduct At Least Fourteen Palestinians In The Occupied West Bank 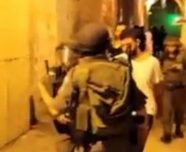 Israeli soldiers invaded, on Tuesday at dawn, many Palestinian communities in various parts of the occupied West Bank, searched and ransacked dozens of homes, in addition to three lathe workshops, and abducted at least sixteen Palestinians.

The soldiers also summoned one Palestinian, identified as Jom’a Mohammad Abdul-Jalil, 24, from Teqoua’ town, east of Bethlehem, for interrogation in Etzion military base and security center, south of Bethlehem.

In addition, the army invaded three lathe workshops in Balata refugee camp, in the northern West Bank governorate of Nablus, and confiscated their machines, reportedly for “manufacturing weapons.”

Furthermore, the soldiers shot and mildly injured two young Palestinian men, during clashes that erupted after the army invaded Azzoun town, east of Qalqilia, in the northern part of the occupied West Bank.

The Palestinian Prisoners Society (PPS) identified the abducted Palestinians as:

Israeli authorities imposed an estimated 36,000 shekels ($10,000) worth of fines to Palestinian minors imprisoned in the Ofer prison, located in the central occupied West Bank district of Ramallah, during “late April,” according to the Palestinian Committee of Prisoners’ Affairs.

A lawyer of the committee, Luay Akka, said in a statement Monday that 62 Palestinian minors were detained and taken to Ofer prison during April.

Of the 62 detained, 23 were detained from their homes, 34 from the streets, two at checkpoints, two after being summoned for interrogation, and one in Israel for not having an entry permit, the statement said.

Akka noted that more than half of the detainees were assaulted during their detention, and that sentences had been issued against 16 of the minors, varying between a month and seven months in prison, while the remaining 46 were still awaiting trial.

According to prisoners rights group Addameer, as of April, there were 6,300 Palestinian prisoners being held in Israeli prisons, 300 of whom were minors.
7 may 2017
Israeli Soldiers Abduct A Young Man, A Child, In Hebron And Jerusalem 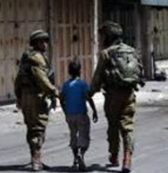 Israeli soldiers abducted, Sunday, a young Palestinian man in Hebron, in the southern part of the occupied West Bank, and a child from his home in occupied East Jerusalem.

The Hebron office of the Palestinian Prisoners’ Society (PPS) said the soldiers abducted Mahmoud Ahmad Rajabi, while walking near the Ibrahimi mosque, and took him to a nearby military center.

In Jerusalem, the soldiers abducted a child, identified as Nour Salim Shalabi, after invading and searching his family’s home at dawn, and moved him to an interrogation center.
Israeli Soldiers Abduct Two Palestinians In Bethlehem

Israeli soldiers invaded, on Sunday at dawn, several communities in the West Bank district of Bethlehem, broke into and violently searched homes, and abducted two young men, before moving them to Etzion military base and security center, south of Bethlehem.

It added that the soldiers also abducted Jihad Mohammad Zawahra, 26, from his home in al-Ma’sara village, east of Bethlehem.

The soldiers also invaded many communities in various parts of Bethlehem governorate, and installed roadblocks, before stopping and searching dozens of cars, and interrogated many youngsters while inspecting their ID cards.
3 may 2017
Israeli Soldiers Abduct Three Children In Beit Fajjar

The Bethlehem office of the Palestinian Prisoners’ Society (PPS) said the soldiers broke into many homes, and violently searched them before abducting the three children, ages 15-17.