The Israeli occupation forces (IOF) at dawn Monday launched large-scale raid and arrest campaigns in the West Bank and Jerusalem.

The PIC reporter said that the IOF arrested six Palestinians and handed another an interrogation summons during a raid into Qarawat Bani Hassan town west of Salfit.

Youth activist Mohammed Ishtiyeh said that the IOF raided a number of Palestinian houses in Salem village east of Nablus and detained a group of Palestinian youths in a square in the middle of the village and interrogated them for long hours.

The PIC reporter said, quoting local sources, that other raids were witnessed in Jenin refugee camp and Burqin village during which two Palestinian youths were arrested.

Meanwhile, a local source reported that the IOF raided al-Khader town south of Bethlehem and arrested a 15-year-old boy and two men after breaking into their houses and searching them.

In the same context, two Palestinians were arrested during a raid and search campaign in Hizma town in Occupied Jerusalem.

Israel's arbitrary arrest campaigns at daybreak have become part of the daily routine in the West Bank and Jerusalem.

According to the latest Palestinian statistics, there are about 6,500 Palestinian detainees languishing in Israeli jails, including 63 females, 6 of whom are minors, 350 children and 11 members of the Palestinian Legislative Council.
6 may 2018
Woman, minors among four detainees in O.J’lem

The Israeli Occupation Forces (IOF) on Sunday evening arrested a Palestinian woman at Qalandia military checkpoint, to the north of occupied West Bank.

A 47-year-old woman was arrested at Qalandia checkpoint for allegedly holding a knife in her possession, 0404 Hebrew site claimed.

The unidentified woman was planning to carry out an anti-occupation attack, the source added.

The detainees were identified as Ahmed Abdel Raouf, Youssef Mustafa, and Tariq Mustafa.
Settlers give chase to Palestinian children

Israeli guards of Shilo illegal settlement, which was forcibly established over Palestinian land south of Nablus, on Sunday chased a group of children in Qaryout town near the city.

Eyewitnesses told the PIC reporter that Israeli occupation forces (IOF) protected the extremist settlers while following the Palestinian young men at the pretext of approaching the settlement.

Later on, IOF soldiers raided the town and arrested a Palestinian youth, Mujahed Mousa, for his refusing to hand over the children or give their names to the IOF.
4 may 2018
Israeli Soldiers Injure A Child, Abduct A Woman, In Jerusalem

Israeli soldiers invaded, on Thursday afternoon, the town of al-‘Isawiya, in occupied East Jerusalem, mildly injured a child and abducted a Palestinian woman.

Mohammad Abu al-Hummus, a member of the Follow-Up Committee in al-‘Isawiya, said dozens of soldiers, and police officers, invaded the town just as the students were leaving their schools.

He added that the soldiers invaded homes and abducted a Palestinian woman, identified as Hayat Mheisin, the mother of Ismael, who was recently abducted by the army and is still under interrogation.

Furthermore, the soldiers fired rubber-coated steel bullets and concussion grenades at random during the invasion, wounding a child in the lower limbs, and causing many to suffer the effects of teargas inhalation.
2 may 2018
Israeli Soldiers Injure Schoolchildren in Qalqilia

Eyewitnesses said several army jeeps invaded Qalqilia city through its northern entrance and drove around its streets in a provocative manner.

They added that the soldiers also installed roadblocks, before invading and searching several homes.

The soldiers also fired gas bombs and rubber-coated steel bullets at schoolchildren, who were walking to their schools, while many youngsters hurled stones at the army jeeps.

Media sources in Jenin said several army jeeps invaded the town and fired gas bombs and concussion grenades at locals, who protested the invasion, causing many to suffer the effects of teargas inhalation.

They added that the soldiers also shot a child, identified as Luay Jawdat Malaysha, 15, with a rubber-coated steel bullet, and abducted him.

During the invasion, the soldiers broke into many homes and violently searched them, before interrogating many Palestinians while inspecting their ID cards.

Local sources reported that the IOF raided many Palestinian houses in different West Bank provinces, wreaked havoc on them and interrogated their owners.

Local residents said that the IOF soldiers at daybreak stormed Jalazone refugee camp north of Ramallah and arrested Mohammed al-Hattab, Mu'az al-Ramahi, and Ayham Nakhla. All of them are at the age of 17.

The IOF arrested four Palestinian youths during a raid into Harmala village east of Bethlehem and handed others summonses to appear before the Israeli intelligence for interrogation.

The IOF soldiers wreaked havoc on the detainees' houses before taking them to an unknown destination.

The Commission of Prisoners’ and Ex-Prisoners’ Affairs kept record of 300 cases of house arrest against Palestinian children living in Occupied Jerusalem since late 2015.

Speaking following visits to Palestinian children sentenced to house confinement, Qaraqe said 300 children have received house arrest orders since October 2015, 20 among whom are still confined inside their family homes.

Qaraqe added that most of the children he met were arrested right after they ended their house confinement terms, which ranged from six months to one year.

In such cases, Palestinian parents are forced to turn into their children’s jailers lest they get penalized, fined, or jailed by the Israeli occupation authorities.

“The policy of house arrest is a punishment both for the child and his/her parents,” warned Qaraqe. “It certainly inflicts serious repercussions on the child’s body and psyche, which affects his/her present as it does his/her future.”
Israeli Soldiers Abduct A Wounded Teen In Bethlehem

Israeli soldiers abducted, on Thursday at dawn, a wounded Palestinian teen from his home in Deheishe refugee camp, south of Bethlehem, and injured several other Palestinians.

Media sources in Bethlehem said the soldiers invaded the family home of Hussein Eyad Shahin, 17, and searched the property before abducting him.

It is worth mentioning that, in December of last year, the soldiers shot Shahin with three live rounds in his leg during an invasion into the refugee camp. 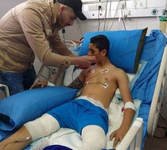 An injured Palestinian boy was kidnapped at daybreak Thursday after the Israeli occupation forces broke into the Duheisheh refugee camp, south of Bethlehem province.

Local resident Emad Shaheen said the occupation forces wreaked havoc on the family home of his injured nephew Hussein Shaheen, 16, after they blew up the entrance gates.

The break-in culminated in the abduction of Hussein, who has reportedly been enduring excruciating pains as a result of an injury inflicted by Israeli bullet fire in December after he was shot in his feet with three bullets. Hussein had his artery severed and underwent a surgery to save his life.

Shaheen said he told the Israeli occupation forces about the minor’s critical health condition but they paid no heed.

At the same time, a number of Palestinian protesters sustained live bullet wounds and others choked on teargas fired by the Israeli military all the way through the assault.

Israeli soldiers abducted, on Monday evening and on Tuesday at dawn, nine Palestinians, mainly children, from their homes in various parts of occupied East Jerusalem. The army also injured several Palestinians near Qalqilia.

Media sources in Jerusalem said the soldiers invaded, on Tuesday at dawn, Silwan town, south of the Al-Aqsa Mosque, searched homes and abducted a child, identified as Mohammad Samer Sarhan, 14.

They added that the soldiers also invaded homes in the al-‘Isawiya town, and abducted two young men, identified as Mohammad Soheib Moheisin, and Husam Sameeh Oleyyan.

It added that the soldiers also abducted Rashid Resheq, 19, and Khaled as-Sokhon, in al-Wad Street, and Abdullah al-Jolani, from Aqbat as-Saraya, in the Old City of Jerusalem.

In addition, several army jeeps invaded Jayyous town, northeast of the northern West Bank city of Qalqilia, especially the Schools Street and the Eastern Neighborhood, and fired many gas bombs and concussion grenades at locals who protested the invasion.