Last month, five-year-old Aisha came home from nursery vomiting and saying she had a headache.

Her condition deteriorated, so her family took her to hospital, where, after undergoing medical checks, they had every parent’s worst fear confirmed.

Aisha was diagnosed with brain cancer.

“The news hit me like a thunderbolt,” Mona Lulu, Aisha’s mother, told Al Jazeera from her home in the al-Bureij refugee camp.

Aisha underwent urgent surgery in al-Shifa Hospital in Gaza City but she needed a medical transfer to go to the Augusta Victoria Hospital in occupied East Jerusalem for further treatment.

But when it came time to decide which of her parents would go with her, the family found the decision was out of their hands.

“Her mother and I applied and we both were rejected,” Aisha’s father Wesam said.

None of the family members had been approved by the Israeli authorities for a permit to allow them to accompany Aisha. Even applications by extended family members were rejected, the only response was that the applications were pending a “security check”, which can take months.

Mohammed Abu Selmiya, director of al-Rantisi paediatric hospital in Gaza, told Al Jazeera that some children suffering advanced cancer cannot be treated in Gaza hospitals due to the lack of necessary equipment.

They can sometimes be issued a transfer to facilities in the occupied West Bank, Jerusalem or cities in Israel.

“After the medical referral is issued, in many cases the Israeli authorities prevent the mother or father from accompanying the child,” Abu Selmiya said.

“Sometimes, the Israeli side says that the names are under ‘security check’, which takes more than two weeks. This leads to the deterioration of the child patient’s condition.”

Abu Selmiya called on child rights organisations, such as UNICEF, to intervene to resolve the crisis for young cancer patients in Gaza who are forced to travel for treatment without their parents.

The Lulu family were in a race against time as Aisha’s condition deteriorated day after day.

An elderly friend of Aisha’s aunt volunteered to accompany Aisha. Her application was approved by the Israeli authorities.

“They allowed a stranger, an old woman who is suffering from health problems herself, to accompany my daughter but we, her own parents, were not permitted,” Wesam said. “What kind of law allows this to happen?” he added bitterly.

Israel’s COGAT agency, which issues permits for Palestinians to go from the Gaza Strip into Israel, said Aisha’s parents did not want to accompany their daughter.

“Her parents signed a waiver, according to which they do not wish to leave the Gaza Strip with her, and instead requested that she exit Gaza accompanied by a friend of the family, who entered Israel with her and stayed with her during the course of treatment,” COGAT said in a emailed statement to Al Jazeera.

Wesam told Al Jazeera that he and his wife did not refuse to accompany their daughter for treatment and did not sign a “waiver”. He said that after they became desperate waiting for permits, they signed a document allowing a woman to accompany Aisha out of Gaza.

“How do I refuse to accompany my daughter to treat her, and then appeal to human rights bodies to intervene and issue permits? I’ve even appealed Israeli institutions to help me to no avail.”

‘When are you coming?’

Mona said she will never forget the moment on April 17 when she had to say goodbye to Aisha as she left for East Jerusalem.
“I felt like my soul had been taken out of my chest,” she told Al Jazeera. “I felt she wouldn’t return.”

At the Augusta Victoria Hospital, Aisha had the surgery to remove part of the tumour from her brain.

“We were all at the edge of our nerves,” Wesam said. “We kept calling the woman accompanying Aisha for updates.”

When Aisha woke up, her family were on the phone, eagerly waiting to talk to her.

The little girl only had one question: “When are you coming?” she repeated, over and over.

“She just cried over the phone,” Mona said, openly weeping. “If I was by her side, I would have comforted her, held her to my chest, taken care of her.”

By her daughter’s side

Mona was only able to be by her daughter’s side days later when Aisha was sent back to Gaza. She had stopped eating and talking, and her doctors had recommended she return to Gaza to be with her family.

“They knew she was living her last days, so they said, ‘Let her spend them with her family in Gaza,'” Wesam said.

Aisha arrived in Gaza almost motionless, only blinking her eyes, and was immediately admitted to al-Rantisi Hospital.

“I had to give in to bitter reality. My daughter was dying,” Mona said.

On the evening of May 15, Aisha took her last breath. “I was watching her in her final moments, filled with helplessness. I could only cry and kiss her hands,” her mother said.

“My daughter succumbed to cancer as a result of her deteriorating mental state.”

Abu Selmiya agreed that the psychological factor was vital during the recovery period.

“When a child undergoes surgery in our hospital, the first word they utter when they wake up is: ‘Where is mama? I want my mother,'” he said.

Ironically, Aisha was not the only Lulu child travelling – alone but not technically alone – for treatment that day in April.

Her baby cousin, Hajar, had a congenital heart defect and a referral was issued for her to transfer to the Augusta Victoria Hospital at the same time.
But the one-and-a-half-year-old had to travel without her parents because their permits were rejected.

“My mother, my wife, my three sisters and my wife’s sisters applied for the permit and they were all rejected,” Ibrahim Lulu, Wesam’s brother and Hajar’s father, told Al Jazeera.

In an uncanny echo of the heart-wrenching choice made by Aisha’s parents, Hajar’s parents had to ask a relative of Hajar’s grandmother to apply for a permit to accompany the child; it was eventually approved by the Israeli authorities.

It came just in the nick of time, as Hajar’s health was deteriorating rapidly; she was losing weight, unable to eat because of her condition and relying solely on being breastfed.

At the Augusta Victoria, the doctors had a hard time figuring out how to feed Hajar as she waited for the surgery to fix the defect in her heart.
The surgery was successful and, three weeks after arriving, Hajar was sent home, on the same day as her older cousin, Aisha.

“My daughter is a baby. She doesn’t talk yet and can’t express herself,” Nihaya Lulu said, holding Hajar to her chest. “It was a terrible period for all of us. Phone calls, live chats online, calls with doctors to check up on her. The Israeli ban caused psychological suffering for all the family. It was torture.”

“We’ll go back to the same circle … Reissue medical transfers, refuse permits and search for someone to volunteer to accompany her,” Ibrahim, a father of six, said.

“Imagine, a sick baby girl travelling alone for treatment without her parents by her side. Is this all in order to maintain Israeli security?”

Last week, the Palestinian health ministry called on a number of international humanitarian and child rights bodies to promptly intervene and exert pressure on the Israeli authorities “to allow the smooth access of patients with their companions to the health facilities wherever the service is available, especially those referred from Gaza Strip to West Bank, including East Jerusalem or other places that require the Israeli permits.”

“Aisha had to fight her disease alone, in blatant disregard to international agreements, covenants and treaties on human rights, children’s rights, the right to health and access to health services in a safe manner,” said Mai al-Kaila, the minister of health.

The child’s father said the soldiers stopped his son, Amjad Ziad Zyoud, 15, on the main Jenin-Haifa Road, and maced him with pepper spray before repeatedly striking and punching him.

The child suffered many cuts and bruises to several parts of his body, before Palestinian medics rushed him to Jenin Governmental Hospital.

It is worth mentioning that the army has recently increased its deployment on main roads leading to various villages and towns in Jenin governorate, in addition to installing many roadblocks.
23 may 2019
Child Suffers A Fracture After Israeli Soldiers Assaulted Him In Hebron 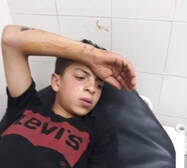 A Palestinian child suffered, late on Wednesday at night, a fracture in one of his arms, after Israeli soldiers invaded his home in Hebron city, in the southern part of the occupied West Bank.

Medical sources in Hebron said the soldiers invaded and ransacked many homes in Jabal Johar area, south of Hebron city, and constantly assaulted a child, causing fractures in one of his arms, in addition to several bruises.

They added that the child, identified as Khaldoun Emad Da’na, 13, was rushed to Hebron Governmental Hospital, and received the needed treatment.

Israeli soldiers invaded, on Thursday at dawn, several Palestinian communities in the West Bank governorates of Qalqilia, Tulkarem,  Nablus and Jenin, searched and ransacked many homes, before abducting eleven Palestinians, and injured one.

During the invasion into Qaffin, several Palestinian youngsters hurled stones at the military vehicles, while the soldiers fired a barrage of gas bombs and rubber-coated steel bullets.

A few Palestinians suffered the effects of teargas inhalation, and one teen was shot with a rubber-coated steel bullet, before the soldiers rushed him to Thabet Thabet Hospital.

A local source reported that the Israeli police stopped a Palestinian youth inside al-Aqsa Mosque's compound, detained him, and transferred him to a nearby detention center for interrogation.

Earlier on the day, the Israeli police detained four Palestinian children in Beit Hanina neighborhood, north of Jerusalem, before releasing three of them and keeping the fourth under arrest.
PPS: “Army Abducts Thirteen Palestinians, Including Children, In West Bank”

The Palestinian Prisoners’ Society (PPS) has confirmed that Israeli soldiers abducted, on late at night and on Wednesday at dawn, thirteen Palestinians, among them several children including a wounding child, after invading and ransacking their homes, in several parts of the occupied West Bank.

The PPS office in Bethlehem, south of Jerusalem, said the soldiers abducted Mahmoud Hussein Salah, 15, from the al-Khader town, south of the city.

In Ramallah, in central West Bank, the soldiers abducted Jamal Abdul-Mo’ti Zeid, 66, and Rashad Karaja, 50, from Safa town, west of the city, in addition to Ehab Masoud and Jamal Nibali.

In Hebron, in southern West Bank, the soldiers abducted Abed-Rabbo Mohammad at-Till, after invading and searching his home.

The soldiers also abducted Saji Abu ‘Athba, 28, and Bilal Abdullah Hotari, 25, from their homes in Qalqilia, in northern West Bank.

In occupied Jerusalem, the soldiers abducted Odah Abdullah Askar, 30, from Hizma town, northeast of the city. 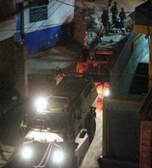 Several Israeli army jeeps invaded, on Tuesday evening, the town of al-Khader, south of the West Bank city of Bethlehem, and shot a Palestinian child before abducting him.

They added that the soldiers shot Mahmoud Salah Amro, 16, in his legs, before abducting him, and took him to an unknown destination.