An Israeli special force on Friday evening kidnapped a Palestinian child in an ambush in al-Khalil, south of the West Bank.

The PIC reporter said that Ahmad al-Qawasmi, 17, was kidnapped by a force of Israeli soldiers riding a black car near the entrance to al-Khalil city.

He added that the Israeli soldiers threatened al-Qawasmi with their machine guns and forced him into the care before they fled the scene.
Israeli troops abduct 11 & 12 year old children from Nabi Saleh village

On Friday afternoon, Israeli troops invaded the village of Nabi Saleh, known as one of the centers of non-violent resistance in the West Bank, and arrested three children – two of them age 11, and the other age 12.

The abduction of children by Israeli soldiers is a common practice of the Israeli soldiers, with children as young as six years old grabbed and brutalized by the soldiers, taken to military bases, and interrogated for hours with no adult or advocate present.

According to the group Defense for Children International, around 500-700 Palestinian children are arrested, detained and prosecuted in the Israeli military court system each year. The majority of Palestinian child detainees are charged with throwing stones, and three out of four experience physical violence during arrest, transfer or interrogation. No Israeli child comes into contact with the military court system.

The majority of children are detained from their West Bank homes during the middle of the night by heavily armed Israeli soldiers. Several hours after their arrest, children arrive at an interrogation and detention center alone, sleep deprived and often bruised and scared. Interrogations tend to be coercive, including a variety of verbal abuse, threats and physical violence that ultimately result in a confession.

Unlike Israeli children living in illegal settlements in the West Bank, Palestinian children are not accompanied by a parent and are generally interrogated without the benefit of legal advice, or being informed of their right to silence. They are overwhelmingly accused of throwing stones, an offense that can lead to a potential maximum sentence of 10 to 20 years depending on a child’s age.

Samer has two older brothers, Mohammad, 19, and Osama, 22, who have been incarcerated for months in Israeli military prisons under so-called ‘administrative detention’, with no charges filed against them.

In a 2015 documentary by Al Jazeera, the mother of Samer, Manal Tamimi, told reporters, “I don’t want my children to be afraid – I try to hide my fear, as a mother, because I want them to be strong. Being afraid [while living] under occupation – you won’t be able to do anything. You will lose your life. But at the same time, I see how they are losing their childhood. I don’t want to have to talk to them about knowing their rights if they are arrested, about the tear gas – I want to talk with them about their future, about normal things. It’s kind of…. Refusing to die in silence…..My resistance is about life, about hope, about dreams, about a beautiful future.”

In the video, Manal also addresses those who would criticize her and other mothers in her village for allowing their children to participate in the non-violent weekly protests in their village. She says, “People who criticize us by saying that we are putting our children in danger – it’s not us who are putting our children in danger. It doesn’t matter what I do, they will be in danger all the time. There is a fear that the army will invade the house in the middle of the night, that they will shoot tear gas in the house, that my children will be abducted or even killed. This is life under occupation.”
27 sept 2018
PPS: “Israeli Soldiers Abduct Twelve Palestinians In West Bank”

The PPS office in Hebron, in the southern part of the West Bank, the soldiers invaded Ethna town, west of the city, and abducted Safwat Rafiq Tmeizi, 29, after violently searching his home, causing damage.

It added that the soldiers also invaded and violently searched the home of Essam Taiseer Tmeizi, in Wad Aziz area, in Ethna.

The soldiers also installed roadblocks on many roads linking Hebron with surrounding towns, and main streets in the city, before stopping and searching dozens of cars, and interrogated many Palestinians while inspecting their ID cards.

The army said it found and found and confiscated two pistols, during searches in a village near Hebron.

In Nablus city, in northern West Bank, the soldiers searched many homes and abducted Samer Shansheer from Asira Street, and Ayman Shakhsheer, from Ras al-Ein neighborhood.

In addition, the soldiers abducted Qais Hamadna and Amir Hamadna, from their homes in Asira ash-Shamaliya town, north of Nablus, and Mohammad Azzam Hamdan, from al-Qibliya town, south of the city.

In Qalqilia, also in northern West Bank, the soldiers abducted one Palestinian, identified as Moath Ammawi, 21.

In Bethlehem, the soldiers invaded Wad Rahhal village, installed roadblocks around local schools, while the students were trying to reach them, and searched many cars.
26 sept 2018
IOF arrests child during settler raid into al-Khalil

Israeli occupation forces (IOF) on Wednesday arrested a Palestinian child while escorting dozens of Israeli settlers who stormed the Old City of al-Khalil.

Local sources said that the IOF arrested Mustafa al-Qawasmeh, 14, in the Old City and transferred him to an undeclared destination.

Dozens of Israeli settlers stormed and toured the Old City of al-Khalil under the protection of IOF soldiers.

In a related context, the Ibrahimi Mosque in al-Khalil is still closed for the second day in a row for Jewish holidays.
25 sept 2018
Army Abducts Six Palestinians In Jerusalem

On Tuesday, Israeli soldiers and police officers, abducted six Palestinians, including three from the courtyards of the Al-Aqsa Mosque, in occupied East Jerusalem.

The Palestinian Prisoners’ Society “PPS” has reported that dozens of soldiers invaded Silwan and at-Tour towns, searched many homes and abducted three Palestinians.

The soldiers interrogated the Palestinians and several members of their families, before abducting them.

Furthermore, the soldiers abducted Anas Dabbagh and Ali Bkearat, from the courtyards of the Al-Aqsa Mosque. The two, who work for the Waqf and Islamic Endowment department, were released later, the PPS said.

It is worth mentioning that Abdeen is a firefighter, working for the Waqf Department in Al-Aqsa.

Furthermore, the soldiers invaded the family home of Lawyer, and former political prisoner, Shirin al-‘Isawi, in al-‘Isawiya town, in Jerusalem.

A 16-year-old Palestinian teen was hospitalized after an Israeli settler ran him over, on Friday, in the Tel Rumeida neighborhood of the southern occupied West Bank city of Hebron.

Witnesses told a Ma’an reporter that an Israeli settler deliberately ran over the Palestinian teen with his vehicle, in Hebron City.

The teen was identified by locals as Munir Abdullah Gharib, aged 16.

Mounir suffered injuries from the attack, and was immediately transferred to the Alia Governmental Hospital in Hebron, for necessary medical treatment; his condition remained unknown.

Incidents involving Israeli settlers hitting Palestinians, in the occupied Palestinian territory, are a relatively regular occurrence, and are usually treated by Israeli security forces as accidents, even in cases when witnesses claim the car rammings were deliberate.

Some 800 notoriously aggressive Israeli settlers now live under the protection of the Israeli military in the Old City, surrounded by more than 30,000 Palestinians.

Palestinian residents of Old City Hebron face a large Israeli military presence on a daily basis, with at least 32 permanent and partial checkpoints set up at the entrances of many streets.

Additionally, Palestinians are not allowed to drive on al-Shuhada street, have had their homes and shops on the street welded shut, and in some areas of the Old City, are not permitted to walk on certain roads.

Israeli soldiers caused, on Wednesday morning, scores of schoolchildren to suffer the effects of teargas inhalation, after the army surrounded schools in southern Hebron, and attacked students protesting the invasion.

Rawhi Zaro, the head of the an-Nahda School, said the soldiers stopped and provoked many students while trying to enter their school, leading to protests, before the army fired many gas bombs and concussion grenades.

He added that dozens of students, and residents in the area, suffered the effects of teargas inhalation, and received the needed treatment.

There are eleven schools in the southern area of Hebron city, and are subject to frequent Israeli military violations, including repeated invasions, while the students are constantly stropped, harassed and searched by the soldiers, and some of them are also taken prisoner.
17 sept 2018
Teacher, Several Students, Injured By Army Gas Bombs In Hebron 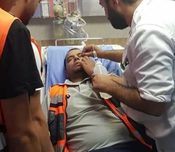 Palestinian medical sources have reported that one teacher and several students suffered the effects of teargas inhalation, Monday, after Israeli soldiers fired many gas bombs in and around their school.

The sources said the teacher Amjad Tanneena, and scores of schoolchildren, suffered the severe effects of teargas inhalation, and were rushed to several hospitals in the city.

The attack took place after dozens of soldiers surrounded the elementary school, and the areas around it, and started stopping and searching dozens of residents, including schoolchildren.

Many Palestinians protested the violation, before the soldiers started firing gas bombs and concussion grenades at them.

A week ago, the soldiers attacked the same school, wounding one teacher, and causing scores of students to suffer the effects of teargas inhalation.
Israeli Soldiers Abduct Nine Palestinians In Jerusalem

The Wadi Hilweh Information Center in Silwan (Silwanic) has reported that Israeli soldiers abducted, on Monday at dawn, nine Palestinian teenagers from their homes in the al-‘Isawiya town, in occupied East Jerusalem.

Silwanic stated that the soldiers broke into and violently searched many homes in the town, and interrogated scores of residents, before abducting nine teenage boys.

Silwan added that the soldiers were accompanied by several Israeli intelligence officers, who also stormed homes and buildings.