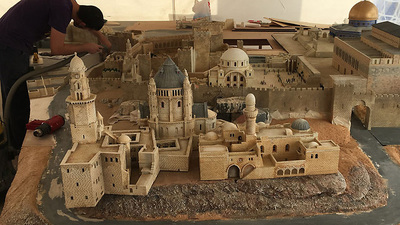 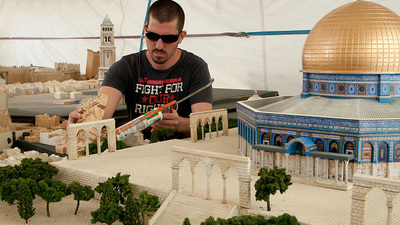 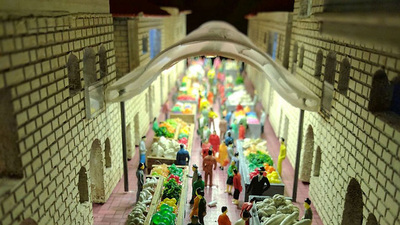 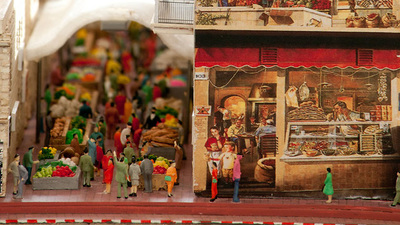 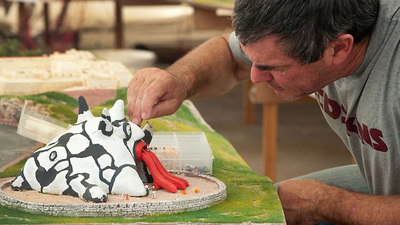 The model will be part of a permanent tourist attraction in Times Square called Gulliver's Gate, which is a 'mini world' display; the model includes the Temple Mount, Mahane Yehuda Market, and the Chords Bridge among other sites in the city.

A giant model of Jerusalem featuring the Temple Mount, the Tower of David, the Knesset, the new Jerusalem Light Rail and the soon-to-be-completed pyramid skyscraper, will be placed in Times Square in New York as part of the Gulliver's Gate "mini-world" project.

The 100-square-meter model was designed and constructed by Israeli company Mathov Designs. The model will be shipped to New York in three weeks in three shipping containers, where it will be rebuilt by the company.

"The project was initiated by a group of people who rented two huge floors in a building in Times Square, where they plan to create a permanent tourist attraction—a miniature world," said Gadi Ma-Tov, the founder of Mathov Designs.

"The idea is to show old and new Jerusalem. We built models of the pyramid building on Eden Street which is still under construction and the old train station. It's not an exact model of the city," he said.

In addition to the aforementioned sites, the model also features the Cedar Valley, the new high-speed train bridges, the old Arab village of Lifta, the Chords Bridge, Mahane Yehuda Market, the entrance to the city, the Nahlaot neighborhood, the Nahalat Shiv'a neighborhood, the Russian Church of Mary Magdalene, the Italian Hospital and the Supreme Court.

Israeli fanatic settlers have been forcing their way into the Mosque on almost daily basis.

Earlier Tuesday, Israeli military sources revealed that Israeli Ministers and MKs will regain permission to break into the al-Aqsa Mosque.

A ban on Israeli ministers and MKs has been in place for several months under the recommendations of the Israeli PM Benjamin Netanyahu after tension has reached a peak in the occupied Palestinian territories.
Israeli gov’t to give go-ahead for ministers, MKs break-ins at al-Aqsa

Erdan was quoted as stating that police will soon give a go-ahead for the Israeli ministers and MKs to visit the al-Aqsa Mosque and defile its plazas.

“The police think, based on its professional evaluation, that visits may be renewed under certain conditions, including that MKs give several hours advance notice,” said Erdan.

When visits are renewed, he added, attention must be paid to the timing, so that they don’t happen in a period of unrest and provoke more instability.

A ban on Israeli ministers and MKs has been in place for several months under the recommendations of the Israeli PM Benjamin Netanyahu after tension has reached a peak in the occupied Palestinian territories.

Israeli fanatic settlers have, meanwhile, been forcing their way into the Mosque on a quasi-daily basis.
NGOs: Archeological theft reveals Israel’s hands are not clean

Non-governmental organizations leveled heavy criticism at Israel after the Jerusalem District Court on Monday refused to reveal the names of archeologists performing digs at antiquities sites in the occupied West Bank.

According to the Israeli daily Haaretz, the Israeli District Court said archeologists’ names should be kept secret, likewise the location of where dug-up artifacts are stored.

The move was attributed to Israel’s fear of academic boycotts, and the difficulties it would pose for ongoing Israeli archeological projects in the occupied territories.

The decision was issued in response to a petition filed by human rights organization Yesh Din and archeology NGO Emek Shaveh, against the Israeli military government in the West Bank (the Civil Administration) and the staff officer of its Archeology Department, who are responsible for issuing licenses for archeological excavations in the occupied territory.

The petitioners sought information that the military refused to provide as part of a freedom of information request, mainly the names of the archeologists, and where Israeli authorities store antiquities they uncover in the West Bank.

The main thrust of District Court Judge Yigal Marzel’s decision dealt with releasing the names of the archeologists. Judge Marzel recognized the importance of publishing their names, as is customary inside Israel, partly for reasons of transparency, but also because the findings of the excavations are often published academically, which requires publishing one’s name.

However, the occupation government managed to convince Judge Marzel that the archeologists, who testified in an ex parte hearing (without the presence of the petitioners), that publishing their names would pose a real threat of academic boycott due to their work in the occupied territories under a license issued by the military regime.

The Israeli occupation authorities claimed there is also a risk that the archeologists would be unable to publish in international academic journals, and that foreign academics would refuse to work with them in future research or refuse to invite them to conferences, thereby harming their professional careers.

In response to the decision, Yesh Din said in a statement: “The Israeli authorities’ fear of the boycott against archeologists in the West Bank and of harm to international relations […] is an admission that Israel knows its hands are not clean, and must therefore conceal its archeological activities in the West Bank. It is unfortunate that the court chose to lend its hand to a policy of concealment and darkness, which denies the public its right to know and the ability to oversee and criticize.”

Emek Shaveh also responded: “More than anything, the court’s decision shows that archeology in the West Bank is treated as a military activity and not as academic research. The foundation of research is revealing the researcher’s name and publishing their findings. If it is permissible to conceal the names of archeologists in the West Bank and the public has no way of knowing where the archeological findings are located, the conclusion is that archeology in the West Bank is fundamentally political.”
22 nov 2016
Historic Names of Palestinian Landmarks in Jerusalem to be Changed by Israeli Authorities

The Israeli government reportedly intends to change the historic names of Jerusalem landmarks into Israeli ones, Hebrew channel 7 reported.

According to the site, the  government will change the name of Damascus Gate, one of the most ancient gates of Jerusalem, to “Heroes Square”, in honor of Israeli settlers and soldiers.

Al Ray further reports that the Israeli committee for commemorating the victims of terrorist attacks, in cooperation with Israeli municipality of Jerusalem, are agreed upon changing the names of some streets in Jerusalem, as well.

The Israeli municipality in Lod city, within the Green Line, fined a Palestinian imam for using loudspeakers to broadcast the call to prayer (Adhan), Haaretz Hebrew newspaper reported Monday.

A penalty of USD 197 was imposed on the Imam Mahmoud al-Far for using loudspeakers to call out the Adhan during night time, the newspaper said.

The Israeli municipal authorities in Lod have fined the imam for violating an existing Israeli “pollution and nuisance law,” which restricts the volume at which mosques can use loudspeakers to call out the Adhan, the newspaper reported.

The penalty came after the Israeli Ministerial Committee on Legislation approved the draft legislation, which calls for barring the use of loudspeakers during the Adhan, moving it to the Knesset where it is expected to go through several readings before making it into law.

Litzman argued that the current phrasing of the bill would not only affect the use of loudspeakers for the Muslim call to prayer, but also the use of sirens on Friday evenings to announce the Jewish holy day of Shabbat.
Israelis launch construction of illegal outpost near Ibrahimi Mosque

Hordes of Israeli settlers on Monday morning set the foundations for a new illegal settlement outpost in al-Sahla area, to the south of the Ibrahimi Mosque, in al-Khalil.

Head of al-Khalil rehabilitation committee, Imad Hamdan, said Israeli settlers set metal foundations on a Palestinian pitch near al-Ibrahimi Mosque, paving the way for the construction of an Jewish-only ghetto.

According to Hamdan, the Israeli project covers an area of up to 500 square meters.

Earlier, the Israeli occupation army seized parts of the pitch and turned it into a military site.

Hamdan added that the move makes part of underway attempts, by the occupation authorities and settler gangs, to crack down on the Palestinians and force them out of the area so as to facilitate the misappropriation of their land and speed up the Judaization of the occupied territories.

The al-Ibrahimi playfield is located in al-Sahla area, in al-Khalil’s Old City, in the southern occupied West Bank.
Dozens of Israeli settlers break into al-Aqsa

According to Quds Press, heavily-armed Israeli forces were deployed in large numbers in the holy Islamic compound in order to pave the way for the settlers’ break-in via al-Magharibeh gate.

56 Israeli settlers broke into the Mosque this morning in total provocation to Palestinian worshipers, the sources reported.

Meanwhile, tight military restrictions were imposed on Palestinian worshipers’ entry into the holy shrine since the early morning hours.

Local sources said that the settlers carried out provocative tours in the courtyards, and took pictures of various locations, according to Al Ray.

The sources added that the presence of worshipers and Quranic students, in the mosque, prevented the settlers from moving freely in the courtyards of Al-Aqsa.

Extremist Israeli settlers and politicians have been violating the sanctity of Al-Aqsa Mosque on an almost daily basis, and always under the protection of armed occupation forces, who often attack Palestinian worshipers who try to protect their holy site.
17 nov 2016
Egypt’s Dar al-Ifta deplores Israeli anti-adhan bill

In a press release on Wednesday, Dar al-Ifta warned that such an Israeli step would add fuel to the fire in the occupied Palestinian territories and would destabilize the regional security further, condemning it as “a blatant violation of the freedom of worship.”

“There should be no restriction on Muslims practicing their religion in the occupied territories or ban on their entry to the holy Aqsa Mosque,” the fatwa institute said.

The institute appealed to the international community and its organizations to necessarily and immediately intervene to curb Israel’s growing restrictions on the Palestinians’ Islamic religious practices as well as its ongoing attempts to change the nature of the land and its indigenous population in the territories under its occupation.
Israeli Colonists Cause Damage To The Church of Holy Sepulcher, Attempt To Occupy It 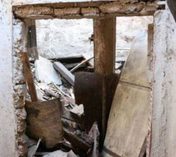 Many extremist illegal Israeli colonists, living in an outpost above the Church of Holy Sepulcher, in occupied Jerusalem, attacked the church property, causing damage, and attempted to occupy a room belonging to the church.

The attack caused excessive damage to the church property, while priests and church officials called the police, who later came to the church and were shown the damage.

The Nativity TV in Bethlehem has published a video of the attack’s aftermath, also showing a Greek Orthodox priest talking to Israeli police officers while inspecting the damage.