29 jan 2017
Netanyahu: All embassies to Israel should move to Jerusalem

Israeli Prime Minister Benjamin Netanyahu reaffirmed on Sunday his support for the US embassy to Israel moving from Tel Aviv to Jerusalem, further adding that “all embassies should come here.”

In a statement during the Israeli security cabinet’s weekly meeting, Netanyahu emphasized the “fundamental” relationship between the United States and Israel.

“There is no substitute for this alliance. Our relations are tight and getting tighter, and I would like to take this opportunity to make it unequivocally clear that our position has always been, and will always be, that the US embassy needs to be here, in Jerusalem,” the prime minister said.

“Jerusalem is the capital of Israel and it is proper that not only should the American embassy be here, but all embassies should come here, and I believe that over time most of them will indeed come here, to Jerusalem.”

Netanyahu’s statements came two days after US President Donald Trump told Fox News that it was “too early” to talk about his controversial campaign promise to move the US embassy to Jerusalem.

Mark Zell, the co-chairman of the Republican Overseas Israel group had accused Netanyahu earlier on Sunday of being behind Trump’s decision to delay the embassy move, The Jerusalem Post reported.

The prospect of an embassy location change has been met with applause by right-wing Israeli officials and strongly condemned by Palestinians and the international community.

The fate of Jerusalem has been a focal point of the Israeli-Palestinian conflict for decades, with numerous tensions arising over Israeli threats regarding the status of non-Jewish religious sites in the city, and the "Judaization" of East Jerusalem through settlement construction and mass demolitions of Palestinian homes.

The Israeli government has openly expressed its anticipation for a Trump presidency, which right-wing politicians believe will make it easier to advance plans to expand Israeli settlements and consolidate Israeli annexation of East Jerusalem and other parts of the West Bank.

Last month, Palestine Liberation Organization (PLO) Secretary-General Saeb Erekat warned that the PLO would revoke all previously signed agreements with Israel as well as the PLO’s 1993 recognition of Israel if Trump followed through on his pledge to move the US embassy from Tel Aviv to Jerusalem.

Erekat reportedly said such a move would indicate the US’s acceptance of “Israel’s illegal annexation of East Jerusalem,” and further warned that “any hope of peace in the future will just vanish."

While members of the international community have rested the solution to the Israeli-Palestinian conflict on the discontinuation of illegal Israeli settlements and the establishment of a two-state solution, Israeli leaders have instead shifted further to the right as many Knesset members have called for an escalation of settlement building in the occupied West Bank, and with some having advocated for its complete annexation.
Settlers defile Aqsa Mosque under police protection

The Israeli occupation police on Sunday morning persisted in allowing Jewish settlers to desecrate the Aqsa Mosque’s courtyards and provided protection for many of them during their tours.

According to local sources, the Israeli police allowed settlers to tour the Mosque’s yards in the morning through al-Maghariba Gate before closing it at 10:30 am.

Meanwhile, the Israeli police imposed entry restrictions on Muslim worshipers at the Mosque’s gates and prevented several of them from going in before the settlers left the Islamic holy site.
28 jan 2017
Armed settlers storm Kifl Haris town

A horde of Jewish settlers, some of them armed, stormed Kifl Haris town, north of Salfit in the West Bank, on Friday in an attempt to provoke the feelings of the Palestinian residents.

Eyewitnesses said that the settlers came to the town aboard a bus and performed rituals at historical sites, adding that they tried to provoke local citizens in order to stir up trouble leading them to use the guns they brought with them.

The village of Kifl Haris had been exposed to several assaults in 2016 by settlers and soldiers, who broke in aboard buses and sabotaged historical sites by spraying racist slurs against Arabs.

Kifl Haris is surrounded by the villages of Deir Istiya, Zeita, Jamma’in and Haris and inhabited by about 3,240 people. 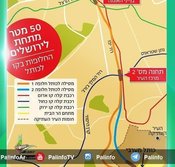 Israel has advanced a plan to extend a high-speed rail line in Tel Aviv to include a station at the Aqsa Mosque’s Western Wall in Occupied Jerusalem, according to Yedioth Ahronoth newspaper.

Katz said last November that he wanted to extend a high-speed rail line currently being built between Tel Aviv and Jerusalem to include a Western Wall station.

According to the new colonial train plan, a tunnel would be dug up to 80 meters (262 feet) deep to connect the central station at the entrance to Jerusalem to the Western Wall station.

The cost of the project has been estimated at some seven billion shekels, according to the ministry spokeswoman.

Two options are being studied, with one seeing the train arrive outside of the Old City near al-Maghariba Gate (Dung Gate), close to the Western Wall.

The other calls for the station to be built inside the Old City.

The Aqsa Mosque’s Western Wall is located in the Old City in east Jerusalem, occupied by Israel in 1967 and later annexed in a move never recognized by the international community.
25 jan 2017
Tafakji: IOA going ahead with plan to annex East Jerusalem by 2020

In light of the US green light and its unlimited support for Israel, especially after electing Donald Trump, the Israeli government has doubled the number of approved housing units in the occupied West Bank and East Jerusalem, in addition to tabling plans to annex large West Bank settlement blocs.

A new reality is being imposed on the ground by the Israeli occupation authority (IOA), making use of the political tribulations in the region, in addition to the unlimited support from western powers.

The Jerusalem 2020 is perhaps the secret answer to what seems to be an acceleration of settlement construction and the IOA decision to boost it. This notion was upheld by expert Khalil al-Tafakji, a well-known expert on settlements and lands, in an interview with the PIC.

Tafakji has explained that the IOA announcement of authorizing hundreds of housing units in East Jerusalem on Sunday (23 January) is part of a plan and a program set in advance, and it was just waiting to be amended and approved by the competent Israeli authorities, depending on the political situation in Israel itself and the region and the world at large.

He added, “All construction plans contribute to one strategic plan which aims to build 56,000 housing units in East Jerusalem as part of the Jerusalem 2020 plan.”

The Palestine Liberation Organization and the Palestinian government said that such steps crossed all red lines, and called on the international community to bear its responsibilities following such decisions that entail dangerous consequences and make the two-state solution impossible to achieve.

Tafakji noted that these Israeli plans and decisions aim at expanding existing settlements in line with the strategic goals that target annexing East Jerusalem. He listed them as follows:

- The settlement of Ramat Shlomo built on the lands of Shufaat and Beit Hanina with a total of 1,500 housing units, 300 of which will be built in the coming period.

- The settlement of Ramout built on the lands of Lifta and it will include building 750 housing units in two stages.

- The settlement of Givat Hamatos built on the lands of Khirbit Tabalia and it includes building 2,600 housing units in five stages.

- The settlement of Givat Yael, which includes building 5,000 housing units in various stages on the lands of Walaja, according to plan discussed, amended and approved in 2016.

- The Israeli plan also includes expanding the settlement of Gilo and Jabal Abughunaim, with a total of 1,890 housing units in the coming three years.

The Israeli cabinet was supposed to discuss a plan on Sunday 22/1/2017 to impose Israeli sovereignty over settlement blocs surrounding Jerusalem, including large settlement blocs such as Gush Etzion, Ma’ale Adumim, Givat Ze’ev, and Beitar Illit. Yet, at the request of the advisers of the US president Donald Trump, Israeli Prime Minister has put off the plan until after he meets with Trump in two weeks.
More than 100 Israeli settlers break into al-Aqsa Mosque

More than a hundred Israeli settlers have once again stormed al-Aqsa Mosque compound in occupied Jerusalem Wednesday morning via the Israeli-controlled Magharibeh gate.

The settlers were escorted by several groups of Israeli troops which led to a state of tension among Palestinian worshipers.

Earlier on Tuesday, the Islamic Awqaf (Endowment) Department in Occupied Jerusalem condemned the Israeli escalation in al-Aqsa after allowing settlers groups to perform Talmudic rituals in the compound.

Over the past few days, Israeli police allowed a group of settlers to perform Talmudic rituals in the Mosque's courtyard in total provocation to Muslim worshipers.

The department reaffirmed that the whole 144 dunums of the al-Aqsa Mosque is a sacred shrine for Muslims only, and no one has the right to make changes on the status quo in the compound.
23 jan 2017
Trump’s first order of business: Denying Palestinian claim to Jerusalem

Anonymous sources within the Trump administration in the US allegedly told Israeli News Channel 2 Friday that the new US President, Donald Trump, would on Monday make his first order of business the transfer of the U.S. Embassy in Israel from Tel Aviv to Jerusalem, effectively denying the Palestinian claim to the city.

The planned move by Trump would be in violation of international law and all signed agreements between Israel and the Palestinian Authority, many of which were negotiated by the United States.

Moving the U.S. Embassy in Israel to Jerusalem constitutes a major break in decades of U.S. policy. The city of Jerusalem has a status that is supposed to be negotiated in a future peace deal – prior to the creation of the state of Israel in 1948, it was considered the capital of Palestine.

Since that time, first Jordan and then Israel (beginning in 1967) occupied the city with military forces, and Palestinians have been routinely denied access – including to the third-holiest Islamic site in the world, the Al-Aqsa Mosque.

The Israeli annexation of Jerusalem in 1967 and takeover of the city using military force has never been recognized by the international community, including by the United States.

Moving the U.S. Embassy to Jerusalem would effectively recognize the Israeli military takeover of the city – and set a precedent that any government wishing to annex their neighbor’s land can simply use military force to do so. This type of military takeover has been illegal under international law since World War II, when Hitler used military force to take control of dozens of neighboring countries and annex them to Germany.

If Trump goes forward with this plan on Monday, it would also be seen as a major provocation against Palestinians and the Arab World in general, as well as to Muslims worldwide who have been anxiously awaiting peace negotiations to determine their access to the holy site of the Al Aqsa Mosque and other holy sites in Jerusalem.
Page:  4 - 3 - 2 - 1
Powered by