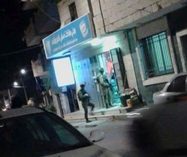 Israeli soldiers abducted, on Thursday evening, five Palestinians from a local mosque in Hizma town, east of occupied West Bank, after surrounding the mosque and invading it.

The invasion and abductions led to clashes between local youngster and the soldiers who’d fired many gas bombs, causing several residents to suffer the severe effects of teargas inhalation.

Although the soldiers withdrew of the town, they are still surrounding it, installed roadblocks and are preventing the Palestinians from entering or leaving it.
24 may 2017
Thousands of settlers break into Old City in Jerusalem

Tension prevailed in Bab al-Amud in Occupied Jerusalem as thousands of settlers stormed the Old City on Wednesday evening as part of the "march of flags" marking the 50th anniversary of the occupation of the eastern part of Jerusalem in 1967.

The march was accompanied by provocative dances and racist chants calling for death for Arabs while tight security measures were imposed on the mainly-Arab quarters of the holy city.

The Israeli police closed Bab al-Amud with iron barriers to protect the settlers and to prevent the Palestinian citizens from entering or leaving through it during the Israeli march, according to the PIC reporter.

The PIC reporter said that the Israeli police attacked a march launched by Jerusalemite citizens in conjunction with the settlers' march.

Earlier in the day the Israeli police ordered the merchants of Bab al-Amud and the surrounding area to close their shops at 4 pm to make room for the settlers' tumultuous marches during which they attack the Jerusalemites and their property.

A central march for settler gangs will take place later on Wednesday from the courtyard of al-Buraq Wall to the Old City and the areas around al-Aqsa Mosque. Massive celebrations will be held in the settlement outposts of Jerusalem especially those in Silwan town to the south of al-Aqsa Mosque and they are expected to continue until Thursday morning.

According to sources from Jerusalem, activists of different nationalities organized a protest at Bab al-Amud to thwart the settlers' march but they were violently attacked by the Israeli police. At least one female activist was injured.

At the same time, a Palestinian march was launched on Nablus Street, which is opposite to Bab al-Amud, to confront another settlers' march.

Eyewitnesses reported that the Israeli police attacked the Palestinian march and assaulted the protesters.
Scores of settlers defile Aqsa Mosque under police guard

Eyewitnesses told the Palestinian Information Center (PIC) that some settlers behaved provocatively during their presence at the Mosque and as they were leaving through al-Silsila Gate.

Meanwhile, the Israeli police are still persistent in imposing tight security measures in east Jerusalem and its Old City and preventing pro-Aqsa activists from entering the Mosque.
22 may 2017
Several Injured during Clashes as Colonial Settlers visit Joseph’s Tomb

At least two Palestinians were injured by rubber-coated steel bullets and three others suffocated from teargas inhalation during clashes that erupted in Nablus, early Monday, after hundreds of Israeli settlers came to perform rituals at Joseph’s Tomb.

Palestinian medical sources said that two Palestinians were shot and injured by rubber-coated steel rounds, while three others suffocated from teargas inhalation.

Joseph’s Tomb is revered by Jews, Muslims, Christians and Samaritans. Though Jewish Israeli settlers regularly break into the holy site to perform Talmudic rituals, under the claim that it belongs to the biblical Joseph, historical novels stress that the tomb belongs to one Sheikh Yusef Dweikat, a local religious figure.
18 may 2017
Calls to intensify incursions into al-Aqsa on the eve of Trump visit

Israeli settlement societies called for intensifying settler incursions into al-Aqsa Mosque and the Old City of Occupied Jerusalem in order to mark the 50th anniversary of occupying Jerusalem and to celebrate the so called reunification of Jerusalem.

The calls coincide with the US President Donald Trump’s visit to Bethlehem next week in order to meet with Palestinian Authority President Mahmoud Abbas and Israeli Prime Minister Benjamin Netanyahu.

Head of the Supreme Islamic Committee in Occupied Jerusalem Ekrema Sabri said these provocative calls will lead to more conflict and tension in the area.

Director of the al-Aqsa Mosque Sheikh Omar al-Kiswani pointed out that 62 settlers along with 49 Israeli guides and students stormed al-Aqsa Mosque on Wednesday.

Kiswani told the PIC reporter that Israeli police offered protection to settlers during the incursions and went on restricting the access of Muslim worshipers to the holy shrine.
11 may 2017
Dawn clashes in Nablus after soldiers storm Joseph’s Tomb

Violent clashes broke out at dawn Thursday after a large number of Israeli troops stormed Joseph’s Tomb in the eastern district of Nablus city.

Eyewitnesses reported that about 10 military vehicles carrying soldiers and one bus carrying Israeli construction workers stormed the mausoleum at around 01:00 am in order to renovate the site.

Consequently, skirmishes between local young men and Israeli soldiers broke out in the area around the shrine before it escalated and expanded to the nearby town of Balata al-Balad, Amman street, and the northern outskirts of Balata refugee camp.

At about 03:30 am, the Israeli occupation forces withdrew to the Beit Furik military barrier, east of Nablus city.

According to local sources, the Palestinian Authority is the only party responsible for conducting renovation works at Joseph’s Tomb.
67 Jewish settlers storm al-Aqsa Mosque plazas

According to Quds Press news agency, 44 settlers broke into the holy shrine in the morning shift from the Israeli-controlled al-Magharebah gate and roamed its courtyards while receiving explanations on the alleged Temple of Solomon.

Eyewitnesses said that Israeli patrols raided the historic area in the town leading to a state of tension and mobilization among Palestinian families and visitors who were present at the site.

According to Quds Press news agency, the settlers broke into the holy shrine from al-Magharebah gate.

They provocatively toured its courtyards and performed Talmudic rituals under the protection of Israeli police, Quds Press added.
6 may 2017
UNESCO: Jerusalem occupied city

The Executive Board of the United Nations Educational, Scientific and Cultural Organization (UNESCO) officially approved on Friday all the resolutions announced during its 201st session including the resolutions of "Occupied Palestine" and the “Educational and cultural institutions in the occupied Arab territories" which denounce the Israeli violations of the Palestinian cultural heritage.

The UNESCO Executive Board expressed regret at the Israeli authorities' refusal to stop their ongoing excavations and illegal projects and practices in Jerusalem especially in the Old City.

The Board condemned Israel's rejection of appointing a permanent representative of the UNESCO in Jerusalem to provide information on all aspects of the UNESCO's areas of concern on a regular basis.

The Board stressed the urgent need to send the UNESCO Reactive Monitoring Mission to the Old City of Jerusalem.

It decided to include these issues in the agenda of its 202nd session within the resolution of "Occupied Palestine".
4 may 2017
$1m in Israeli Aid for UNESCO Cut over Jerusalem Resolution

Israel said, on Wednesday, that it will cut back $1 million in aid for UNESCO, in response to a recent resolution which is critical of Israeli policy in Jerusalem.

Israeli Prime Minister Benjamin Netanyahu, who announced the decision at a cabinet meeting on Wednesday, said that he had ordered the foreign ministry to immediately implement the order.

The Israeli Minister of Culture and Sport, Miri Regev, called on the government to close the UNESCO headquarters in Jerusalem and confiscate the building.

On Tuesday, UNESCO passed a resolution that criticises Israel over its continuing archaeological excavations in East Jerusalem’s Old City.
According to the resolution, the excavations are a violation of international law.

The proposal was presented by Algeria, Egypt, Lebanon, Morocco, Oman, Qatar and Sudan.
Jordan Rejects Any Attempt to Undermine Arab Identity of Jerusalem

Jordan’s King Abdullah II, on Tuesday, welcomed Archbishop of Canterbury Justin Welby, and reviewed the Kingdom’s efforts to safeguard Islamic and Christian holy sites in Jerusalem, in addition to discussing the latest developments in the Middle East.

The meeting, held at al-Husseiniya Palace and attended by King’s Personal Envoy and Advisor for Religious and Cultural Affairs, HRH Prince Ghazi bin Mohammad, touched on the key role of Arab Christians and their contributions in the region in its past, present and future.

According to Al Ray, the meeting dealt with Israel’s unilateral actions in Jerusalem which threaten Islamic and Christian holy sites, with the King reiterating that Jordan totally rejects any attempt to undermine the Arab identity of the holy city.

Also discussed at the meeting were other current regional issues, particularly the fight against extremism and terrorism, which is not associated with any religion in particular.