The Islamic Awqaf said that Ariel and 17 Israeli settlers, accompanied by a large police force, broke into al-Aqsa Mosque in the morning and toured its courtyards.

The Israeli police stormed al-Aqsa Mosque in Occupied Jerusalem after midnight on Sunday and forced Muslim worshipers out.

Local sources said that heavily armed Israeli police forces stormed the compound shortly after the end of the Muslim Tarawih prayers and forced dozens of worshipers who remained in al-Aqsa out of the site.

A few days ago, dozens of Jewish settlers broke into al-Aqsa Mosque and carried out provocative tours inside the compound and in the Old City under police guard.

Eyewitnesses said that the settlers assaulted a number of Palestinian shop owners in the Old City's markets.

Israel has demolished 5,000 Palestinian homes in Jerusalem since the occupation of the city in 1967.

According to a report by the Land Research Center, the number of buildings destroyed between 2000 and 2017 rose to 1,700.

Al-Quds International Foundation said that Israel demolishes Palestinian homes in Occupied Jerusalem under the pretext that they are unlicensed.

Al-Quds Foundation said in a research paper released on Saturday that the Israeli gangs in 1948 committed massacres against the Palestinians, stole their lands, and occupied Sinai and Golan Heights in violation of international law.

Israel, the paper noted, between 1967 and 2017 established about 14 settlements and hundreds of random outposts in East Jerusalem. Nearly 220,000 Israeli settlers are living in these settlements.

It added that Israel pursued a forced displacement policy against the Palestinians and seized over 26% of the total area of East Jerusalem to build new settlements or expand existing ones.

Not only the settlement construction but Israel has also adopted other policies with the aim of wiping out the Palestinian presence in Jerusalem, like the apartheid wall, unlawful killing of Palestinians, arbitrary arrests, and control of the education sector.
17 may 2019
Israeli police arrest Dutch MP upon attempt to enter Aqsa

The Israeli occupation police on Friday morning arrested a pro-Palestine Dutch lawmaker as he was trying to enter the Aqsa Mosque.

According to Euro-Mediterranean Human Rights Monitor, Dutch MP Tunahan Kuzu (Muslim) was carrying a Palestinian flag when he was denied entry to the Aqsa Mosque and arrested by Israeli police officers video

Kuzu tried to visit Aqsa to express his solidarity with the Palestinian people. He is an outspoken critic of Israel’s practices against the Palestinians.

In 2016, Kuzu refused to shake hands with Israeli premier Benjamin Netanyahu during his visit to the Netherlands.
14 may 2019
Palestinians face strict Israeli restrictions to visit Al-Aqsa for Ramadan

Palestinians are facing extensive restrictions to visit the Al-Aqsa Mosque compound for the holy month of Ramadan, on Tuesday.

According to a report issued by Al-Monitor, “Men who are under 16 years old and over 40 years old are allowed to visit the Al-Aqsa Mosque.”

The report said, “Women of all ages are allowed to visit the mosque on Fridays.”

However, the report stressed that men aged between 30 and 40 require Israeli-issued entry permits to do visit the compound, and those between the ages of 16 and 29 are “ineligible to even apply.”

The report said that “ten years ago, Israel started to allow Palestinians in the West Bank to enter Jerusalem to pray at Al-Aqsa during the month of Ramadan. Eligibility is generally determined by age group and depends on Israel’s political relationship with the Palestinian Authority (PA).”

Unfortunately, “there are no official criteria for the permits, only conditions for consideration,” Al-Monitor reported.

Palestinians may apply for a permit, however, can be rejected without a given reason.

He noted that the set of conditions for eligibility can vary, “Sometimes applicants must be married, and widowers or divorcees are excluded.” Thousands of others, meanwhile, “are denied permits for security reasons.”

In April, Israel announced that 700 permits would be granted permits for relatives living in Arab countries to visit the Al-Aqsa Mosque during Ramadan and another 700 permits for Palestinians to travel abroad through the Ben-Gurion Airport.

Regarding expatriate permits, Wahdan said, “Last year, they said 700 permits would be issued, but only half of them were.”

Ramadan typically sees a slight ease of permit restrictions on Palestinians, particularly women, though the thousands who do get permits are still subjected to long waits and checkpoints and searches by armed Israeli forces.
Jewish groups threaten to stage mass break-ins at Aqsa on Ramadan 28

Jewish temple groups have announced intents to stage mass break-ins at the Aqsa Mosque on the 28th day of Ramadan, June 2, to celebrate what they called “Jerusalem day.”

The temple groups threatened to defy an Israeli police decision not allowing them to enter the Islamic holy site on that day and said they would mobilize thousands of Jews to march en masse to the Mosque.

A member of an extremist Jewish group reportedly submitted a petition to the Israeli high court of justice to revoke the police decision and threatened to fight for Jews’ entry to the holy site on Jerusalem day.

The Jewish groups also said they would pressure Israeli premier Benjamin Netanyahu through Knesset members to allow them to enter the Mosque on Ramadan 28.

In this regard, the Israeli occupation police said they would not allow Jews to visit the site because the Jerusalem day would coincide with the final days of Ramadan.
13 may 2019
Large groups of Israeli settlers storm Al-Aqsa

Dozens of Israeli settlers stormed the Al-Aqsa Mosque compound under the protection of heavily armed Israeli forces and police, on Monday.

Local sources said that dozens of Israeli settlers stormed the compound through the Moroccan Gate in large consecutive groups, performed Jewish religious prayers, and exited through the Chain Gate.

Sources added that Israeli forces and police were deployed across the compound, as Israeli settlers carried out provocative tours.

Such visits spark frustration among Palestinians who see the incursions as a direct threat to Palestinian sovereignty and any potential for a future independent Palestinian state, which has been effectively marred by increasing settler presence across Palestinian land.

The Al-Aqsa Mosque compound, which sits just above the Western Wall plaza, houses both the Dome of the Rock and Al-Aqsa mosque. The third holiest site in Islam, it is also venerated as Judaism's most holy place, as it sits where Jews believe the First and Second Temples once stood.

While Jewish visitation is permitted to the compound, non-Muslim worship at Al-Aqsa is prohibited according to an agreement signed between Israel and the Jordanian government after Israel's illegal occupation of East Jerusalem in 1967.

Despite the agreement with Jordan -- which is the custodian of Al-Aqsa -- Israeli authorities regularly allow Jewish visitors to enter the site, often under armed guard. Such visits are typically made by right-wingers attempting to unsettle the status quo at the site, and coincide with restrictions on Palestinian access, including bans on entrance and detentions.
Soldiers Abduct Two Palestinian Children In Jerusalem

Israeli soldiers abducted, on Sunday evening, two Palestinian children, and assaulted one of them, in Bab al-‘Amoud area, in occupied East Jerusalem.

They added that the soldiers also assaulted Essam with clubs and batons, before abducting him, and took the two to a nearby police center.

It is worth mentioning that the soldiers fired many concussion grenades at dozens of Palestinian worshiper in Bab al-‘Amoud, as dozens of worshipers were leaving the Al-Aqsa Mosque following evening prayers. video video

The army also invaded the Al-Aqsa Mosque through the al-Magharba Gate, and forced the Palestinians out of its courtyards, shortly after they conducted evening prayers.

Since the beginning of the Muslim holy month of Ramadan, the army and the police have carried out dozens of violations, including attacking and preventing the Palestinians from sitting or gathering in Bab al-‘Amoud, and several areas near Al-Aqsa Mosque, and detained many of them.
12 may 2019
Settlers defile Aqsa Mosque on seventh day of Ramadan

A group of Jewish settlers on Sunday morning, the seventh day of the holy month of Ramadan, desecrated the Aqsa Mosque’s courtyards under police protection.

According to eyewitnesses, the settlers conducted quick tours at the Aqsa Mosque and left through al-Silsila Gate because of the intensive presence of Palestinian worshipers. 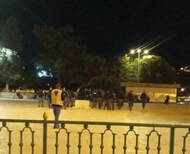 The Israeli occupation police on Saturday night stormed the Aqsa Mosque and embarked on forcibly removing Palestinian worshipers, who were on retreat at the holy site.

According to local sources, a large number of police forces stormed the Aqsa Mosque following the Isha and Tarawih prayers and forced worshipers to leave the site. video

The Israeli measure provoked clashes with dozens of worshipers at the Aqsa Mosque.
10 may 2019
In video - Over 180,000 worshipers pray at Al-Aqsa on first Friday of Ramadan
Meanwhile, the Palestinian Red Crescent Society (PRCS) said that Israeli police forces, who were situated at the gates of the Al-Aqsa compound, banned its crews from entry.

The reason for the ban remained unknown and prevented the PRCS crews from providing medical care to anyone suffering from the heat and overcrowding.

Palestinian residents of the West Bank are not allowed to access occupied East Jerusalem or Israel without an Israeli-issued permits.

Ramadan typically sees a slight ease of permit restrictions on Palestinians, particularly women, though the thousands who do get permits are still subjected to long waits and checkpoints and searches by armed Israeli forces.
Israeli police summons Sheikh Kiswani for interrogation

The Israeli occupation police at dawn Friday handed Sheikh Omar al-Kiswani, director of the Aqsa Mosque, a summons for interrogation.

Jerusalemite sources said that Sheikh Kiswani was ordered to head for al-Qishla police station in the Old City for interrogation.