Villagers of Bil’in, in the central West Bank district of Ramallah, held the weekly nonviolent protest, on Friday, in participation with Israeli activists and delegates from Norway, Japan, and Spain, demanding ending the illegal Israeli occupation, and marched in solidarity with hunger striking detainees in Israeli prisons.

The nonviolent protesters marched carrying Palestinian flags and posters of detainee Bilal Kayed, and dozens of striking detainees, while chanting against the ongoing Israeli occupation and violations.

They demanded the release of Kayed, who is held under arbitrary administrative detention orders, without charges or trial, after he already served his 15.5 prison sentence, and called for the release of all detainees.

Following the protest, the visiting delegates listened to the history of nonviolent struggle in Bil’in, and the successes of the ongoing protests in retrieving illegally confiscated Palestinian lands and rerouting the illegal Annexation Wall.

The delegates also listed to a detailed account of the types of weapons used by the soldiers, and the ongoing punitive invasions into the village as an act of collective punishment by the army in an attempt to stop the protests.

Also Friday, the soldiers released a child, identified as Hamza Khatib, who was kidnapped after the soldiers invaded Bil’in last week, and accused him of throwing stones at the military vehicles.

His lawyer managed to refute the military claims, and informed the court that the soldiers violently assaulted Khatib, and beat him on several parts of his body in addition to threatening to further harm him and his family.
15 july 2016
Freedom March: 700 Activists March Marking the 10th Anniversary of Combatants for Peace
regional groups of CFP, told the gathering” we are here to stay we are not leaving, we do not fear your weapons because we believe in justice and peace.”

From the Israeli side CFP activist Neta Hazan said “ As an Eastern woman , the daughter of Moroccan and Egyptian Jews, I feel that it is my duty to stand by my Palestinian sisters and brothers because their struggle is our struggle we, the Easterners, against repression , denial and towards equality and freedom . ”

Gerard Foster  delivered also a speech and said” the fight for peace is a lonely road, sometimes you finds yourselves standing alone, but let me tell you, you are not alone, you  inspire us all.”

At the last speech, Sami Awad, Director of the Palestinian NGO Holy Land Trust, spoke to the Israeli protesters and said ” to those Israelis who are here seeking peace with me because they are afraid of me, and want me to become less of a threat to them, I say go back to your home I do not want your peace. To those Israelis who are here because they believe in Peace, they believe in justices, they believe in freedom and equality, and they are ready to commit to talking and walking this path, I don’t only say welcome,  abut also say my home is yours.”

At the end Mira Awad, a Palestinian Israeli singer preformed a song from the words of famous Palestinian poet Mahmoud Darwish.

CFP believes that the conflict cannot be resolved, through military means, by either of the parties, but only through joint action, can we break the cycle of violence and put an end to the Israeli occupation of the Palestinian territories.

The movement calls for the establishment of an independent Palestinian state with its capital in East Jerusalem, based on the border of June 4, 1967, alongside Israel. CFP uses nonviolent means and call on both nations to join us to achieve peace and reconciliation between Palestinians and Israelis.
11 june 2016
Bil’in Holds The Weekly Protest Against The Wall, Colonies 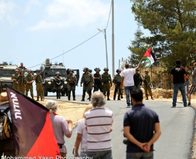 Several Palestinian, Israeli and international peace activists participated, Friday, in the weekly nonviolent protest against the Annexation Wall and colonies, in Bil’in village, near the central West Bank city of Ramallah.

The protesters marched from the center of the village while chanting against the Israeli occupation, the ongoing illegal annexation of Palestinian lands, and the escalating violations.

Dozens of soldiers were deployed the in the area, and blocked a main road, preventing the nonviolent protesters from approaching the isolated Palestinian lands and orchards.

Photojournalist Haitham Khatib said the protest was small this week, with around 25 persons marching, and fifty Israeli soldiers opposing them.

“They are occupiers, and this is our land — fifty combat-ready armed soldiers, and we were around 25 persons.”

He told the IMEMC that the army did not fire on the protesters, and the procession ended peacefully without any reports of injuries.
3 june 2016
Bethlehem: Scores Join Freedom March ; Saying Enough 49 Years of Occupation
of Palestinian land is a prison not only to the Palestinians but also to Israelis.” He added, “The real peace comes via joint struggle on the ground and not through peace initiatives.” From his part, Mohamed Ewadah, the Palestinian coordinator of CFP, said, “We not created to live in prisons, or born to mothers who did not know the taste of freedom.

We will free freedom.”  Combatants for Peace Movement calls for the establishment of an independent Palestinian state with its capital Jerusalem. CFP uses nonviolent means and call on both nations to join us to achieve peace and reconciliation between Palestinians and Israelis.

CFP is a group of Palestinians and Israelis who have taken an active part in the cycle of violence in the region: Israeli soldiers serving in the army and Palestinians as combatants fighting to free their country, Palestine, from the Israeli occupation.
27 may 2016
For The First Time In 11 Years, Army Refrains From Using Weapons In Bil’in

Dozens of Palestinians, Israeli and international peace activists held, on Friday, the weekly nonviolent protest against the Annexation Wall and colonies, and for the first time in eleven years, Israeli soldiers refrained from using their weapons.

As the case every week, the protest was organized by the Popular Committee against the Wall and Colonies in Bil’in, in participating of dozens of Palestinian, Israeli and international peace activists, starting from the center of the village, heading towards the villagers’ orchards.

The protesters carried Palestinian flags, and marched in the streets chanting and singing for national unity, steadfastness, ongoing popular resistance, liberation, the release of all detainees and boycotting Israel.

Coordinator of the Popular Committee in Bil’in, Abdullah Abu Rahma, said this is the first time in eleven years of ongoing weekly nonviolent protests, that the Israeli soldiers refrain from firing on the protesters, and instead just photographed and filmed them.

He added that the soldiers also tried to get the protesters come to a close proximity with them, but years of experience with the army and its tactics have proven that when such a thing happens, the soldiers easily kidnapped and detained the protesters.