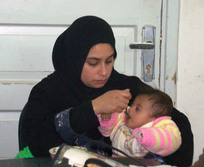 Najah Zohod is the Nutritional Director of the Ard El Insan Child Nutrition Centre in Gaza city. The centre works exclusively with malnourished under-fives. Children are regularly referred to Ard El Insan from the Gaza-based UN Relief and Works Agency (UNRWA) which supports some of the poorest communities in the Gaza Strip.

But many mothers self-refer, by simply turning up at the centre with their babies and young children. This morning Ard El Insan is crowded with women and children queuing for assessments and treatment. Most of the children are quiet, and some look thin and listless.

Israel's ongoing siege and closure of the Gaza Strip is chronically affecting every aspect of life in Gaza, including access to fresh food and water. Fresh meat has been scarce for weeks, and now there are also shortages of fresh fruit. Meanwhile chronic power cuts across the Strip have left fifty percent of Gaza households (around 750,000 people) desperately short of fresh drinking water, because there isn't enough fuel to power their electric water pumps more than 4-6 hours per day.

Despite the fact collective punishment is illegal under international human rights and humanitarian law, the Israeli Occupying Forces (IOF) continue to collectively punish 1.5 million Gazan civilians. Many of the women who come to Ard El Insan for help feeding their malnourished children are now dependent on food aid assistance from either UNWRA or the World Food Programme (WFP). But WFP is currently unable to provide 84,000 of its poorest beneficiaries in Gaza their full aid rations, also because of the continued closure. Some of the poorest families in the Gaza Strip are struggling to obtain adequate food for their children.

In the Ard El Insan dining area, women are now feeding their children fresh meat and vegetable soup, which the centre provides free of charge. One of the mothers, 23 year old Fatma Mishrif, lives in Nuseirat refuge camp in the central Gaza Strip. "When I first brought my daughter here, she was 6 months old and very underweight, and I didn't know how to make her more healthy" she says. "But the centre has really helped me to help her, and now my daughter is much better. This place is very important for all our children." The centre also offers mothers nutritionally-rich rations of dry food to feed their children at home, donated by UNRWA.

Ard El Insan uses a holistic approach, offering mothers ongoing support in child nutrition, breast feeding, and other parenting skills. But the centre Medical Director, Adnan Al-Wahaidi, is adamant the Israeli siege is exacerbating child malnutrition in the Gaza Strip. "The consequences of this siege and closure have been very severe for babies and young children" he says. "We have documented noticeable increases in recent rates of child malnutrition, especially chronic malnutrition. For example, there have been serious increases in child stunting, which is a proxy for chronic malnutrition, because it indicates prolonged exposure to malnutrition."

According to the Palestinian Central Bureau of Statistics 10.7% of Gazan children aged under five are now suffering stunted growth due to chronic malnutrition. Dr Al-Wahaidi describes the figure as "Shocking," pointing out that neighbouring Arab countries have child stunting rates of less than 6%.

"One of the major problems in the Gaza Strip" he says, "is that we do not have sufficient natural food resources. We cannot grow the variety of fruit and vegetables that we need in order to provide ourselves, and our children, a well balanced diet. We are dependent on food imports, but the food table in the Gaza Strip is now severely deficient because of the siege and closure." Dr Al-Wahaidi acknowledges that Gaza has become donor dependent. "We have tens of thousands of families who now have no options or alternatives to humanitarian assistance" he says. "But if this siege is maintained, then current child malnutrition interventions and preventions will not be sufficient. Child morbidity and mortality will both increase. We will not be able to cope."