17 mar 2018
Fifteen Years Since Her Death, Rachel Corrie Is Not Forgotten

Friday, 15 years ago, 23-year-old American peace activist Rachel Corrie was killed by an Israeli bulldozer that was preparing to demolish a Palestinian home in the Gaza Strip.

Corrie has since become an icon of global solidarity with the people of Palestine.

Born on April 10, 1979 in Olympia, Washington, Corrie dedicated her life to defending Palestinian rights. In 2003, she went to the Gaza Strip as a member of the International Solidarity Movement.

She was known for her love of peace and for defending Palestinian rights, frequently broadcasting photo essays exposing Israeli rights violations in the occupied territories.

On March 16, 2003 in the Gaza Strip’s southern city of Rafah, Corrie stood before an Israeli bulldozer in hopes of stopping it from demolishing the home of a local Palestinian family.

Corrie believed that her foreign features and blonde hair would deter the bulldozer — but she was wrong. She was crushed to death when the bulldozer driver ran her over repeatedly, according to witnesses.

The people of Gaza received news of her murder with grief and horror, describing her as a “martyr” and staging a massive funeral for the American activist.

Since then, the name Rachel Corrie has become synonymous with the Palestinian cause. It was chosen as the name for an Irish aid ship that set out for Gaza in 2010, while her story has been told in several documentary films portraying Palestinian suffering.

Her family later filed a lawsuit against the Israeli authorities for their daughter’s death. But an Israeli court acquitted the bulldozer driver in a controversial 2013 verdict — a decision denounced by rights groups.

In a letter sent to her family from Gaza shortly before her murder, Corrie described the Palestinian suffering she witnessed.

“No amount of reading, attendance at conferences, documentary viewing and word-of-mouth could have prepared me for the reality of the situation here,” she wrote. “You just can’t imagine it unless you see it. 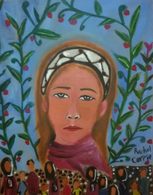 Painting by Malak Mattar; read more about her painting at We Are Not Numbers.

March 16th, marks the 14th anniversary of the day our daughter Rachel stood in Gaza with other international activists and challenged the Israeli military’s illegal confiscation of Palestinian land and the demolition of Palestinian homes. Rachel’s life was stolen that day, but her spirit was not.

As these anniversaries approach, there are sometimes tensions as we struggle to find the best way to remember, and to explain why we do so. But in a moment of illumination, we are reminded that each March 16th is for us another opportunity to reaffirm our commitment to Gaza. It is a place that overflows with suffering, yet is filled with so much more.

Rachel wrote to us about the people.  “…I am also discovering a degree of strength and of the basic ability for humans to remain human in the direst of circumstances…I think the word is dignity. I wish you could meet these people.  Maybe, hopefully, someday you will.”

During the past fourteen years, we have been blessed with our connections to Palestinians in Gaza, in the West Bank, and elsewhere in the world. We have built relationships with them and with Palestinian and Jewish Israelis who reflect the strength and dignity Rachel recognized, and with open hearts and minds steadfastly pursue justice.

Here in the U.S., it is easy to be distracted by our new political challenges. But with colleagues in our hometown of Olympia and beyond, we are articulating our vision for a “great” country and world. In the words of the song from the Civil Rights Movement, we are keeping “our eyes on the prize.” We know you are doing the same. One part of that vision is freedom for Gaza.

At the Rachel Corrie Foundation, commitment is a core value. Today, as we remember and recommit, we are counting on you to join us in building community with Gaza. You, your organization, and your community can make so much difference for people there.


Thank you for remembering with us today and for keeping Rachel’s spirit and commitment alive through your actions for Gaza.

Today, March 16th, 2017, marks 14 years since the day that Rachel Corrie had her life taken. And though her life ended early, her courageous heart and defiant spirit will be carried onward, and continue to inspire many activists now and into the future.

Holding a megaphone, and wearing bright colors, Rachel Corrie stood in between a Palestinian house awaiting its demolition and the bulldozer about to demolish the house, in the town of Rafah in Gaza. For several days, ISM activists had been serving as protective presence in the homes that were on their way to being destroyed. Just hours before, a group of activists entered a Palestinian house about to be demolished, shouting at the military that they were inside, and they backed out.

The definition of a bulldozer: 1) a powerful track-laying tractor with caterpillar tracks and a broad curved upright blade at the front for clearing ground. 2) a person or group exercising irresistible force, especially in disposing of opposition.

A solidarity activist with ISM, Rachel Corrie used her body, her voice, her heart, and her will to try to stop one of many house demolitions plaguing the Palestinian people by the Israeli occupation forces. The driver of the bulldozer, a Russian immigrant, claimed that he did not see her. And, as the driver began to drive towards the house, he scooped up the dirt and took this beautiful human with him. Not once, but two times, as other activists shouted to stop through the loudspeakers. Rachel’s skull was fractured, and though she was still alive after the incident, not long after she was rushed to the hospital, she passed away. Rachel was twenty-three years old.

The case after her death proved to be controversial and contentious. Rachel’s parents sued the state of Israel, and many organizations criticized Israel for their one-sided investigation of the case. As of 2015, the court has rejected the appeal.

Rachel’s parents continue to do her work through the Rachel Corrie Foundation for Peace and Justice and launched projects in memory of their daughter. They have also advanced investigation into the incident and asked the U.S. Congress and various courts for redress. Rachel’s story has inspired a play entitled “My Name is Rachel Corrie”, followed by a book “Let Me Stand Alone” that includes journal entries and emails from her experience in Gaza.

This is a poem written by Rachel Corrie only a couple of months before her tragic death.

If I lived in Bosnia or Rwanda or who knows where else, needless death wouldn’t be a distant symbol to me, it wouldn’t be a metaphor, it would be a reality.

And I have no right to this metaphor. But I use it to console myself. To give a fraction of meaning to something enormous and needless.

I can’t cool boiling waters in Russia. I can’t be Picasso. I can’t be Jesus. I can’t save the planet single-handedly.
I can wash dishes.

Thank you for your email. I feel like sometimes I spend all my time propogandizing mom, and assuming she’ll pass stuff on to you, so you get neglected. Don’t worry about me too much, right now I am most concerned that we are not being effective. I still don’t feel particularly at risk. Rafah has seemed calmer lately, maybe because the military is preoccupied with incursions in the north – still shooting and house demolitions – one death this week that I know of, but not any larger incursions. Still can’t say how this will change if and when war with Iraq comes.

Thanks also for stepping up your anti-war work. I know it is not easy to do, and probably much more difficult where you are than where I am. I am really interested in talking to the journalist in Charlotte – let me know what I can do to speed the process along. I am trying to figure out what I’m going to do when I leave here, and when I’m going to leave. Right now I think I could stay until June, financially. I really don’t want to move back to Olympia, but do need to go back there to clean my stuff out of the garage and talk about my experiences here. On the other hand, now that I’ve crossed the ocean I’m feeling a strong desire to try to stay across the ocean for some time. Considering trying to get English teaching jobs – would like to really buckle down and learn Arabic.

Also got an invitation to visit Sweden on my way back – which I think I could do very cheaply. I would like to leave Rafah with a viable plan to return, too. One of the core members of our group has to leave tomorrow – and watching her say goodbye to people is making me realize how difficult it will be. People here can’t leave, so that complicates things. They also are pretty matter-of-fact about the fact that they don’t know if they will be alive when we come back here.

I really don’t want to live with a lot of guilt about this place – being able to come and go so easily – and not going back. I think it is valuable to make commitments to places – so I would like to be able to plan on coming back here within a year or so. Of all of these possibilities I think it’s most likely that I will at least go to Sweden for a few weeks on my way back – I can change tickets and get a plane to from Paris to Sweden and back for a total of around 150 bucks or so. I know I should really try to link up with the family in France – but I really think that I’m not going to do that. I think I would just be angry the whole time and not much fun to be around. It also seems like a transition into too much opulence right now – I would feel a lot of class guilt the whole time as well.

Let me know if you have any ideas about what I should do with the rest of my life. I love you very much. If you want you can write to me as if I was on vacation at a camp on the big island of Hawaii learning to weave. One thing I do to make things easier here is to utterly retreat into fantasies that I am in a Hollywood movie or a sitcom starring Michael J Fox. So feel free to make something up and I’ll be happy to play along. Much love Poppy