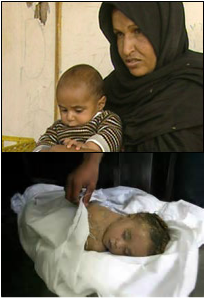 Thin tree branches, with leaves and twigs intact, were laced around the ends of the hut to insulate it against the hot wind that blows into the sand dunes, rolling away to the border fence and on to Israel.

The baby's mother sat with her legs tucked under her, hiding most of her face behind her black head-scarf. It flapped slightly in the breeze, and she used it to wipe her tears and muffle her sobs. The woman's name is Aziza Abu Otayek. She wept because she was remembering the death of another baby son, one morning in March last year, just after the older children had gone to school.

Until that day their home was just downhill from a deep pond of sewage, pumped into a depression in the dunes and held there by earth walls because the water authorities in the Gaza Strip had nowhere else to put it.

Aziza heard someone shouting, telling her to run away. She got out of the hut, then went back in because she had forgotten her head covering.

The wall of raw human waste slammed into them. It knocked her down and tore the baby from her arms. He drowned. They found his body against the wall of the mosque a hundred metres away. He was nine months old. His grandmother was also drowned.

Aziza worried about her new baby until he was born at the end of last year, because when she was hit by the flood she swallowed some of the sewage and she thought it might have harmed him. They named the new baby Mohammed, after his dead brother.

While she talked, he gurgled happily, untroubled by the flies that buzzed around his eyes and lips.

Aziza has an older son, a four-year-old called Ramadan. His father said he asks about his dead brother, and when he is cross he says he prefers the first Mohammed to the second one. But Ramadan seems a cheery little soul, though he has nightmares about the flood. He looks around the lakes of almost raw sewage that still lie near their home and asks his parents if another wave is going to come.

One might. The pond that killed Ramadan's brother and grandmother is not the only one near their home. The others are much bigger and full of sewage.

A Palestinian water engineer called Sadi Ali gave me a tour. He explained that the sewage lakes have grown so big because Gaza's growing population - 1.4 million, half of whom are under 16 - has overwhelmed what were anyway inadequate facilities for dealing with waste water.

Even though, to his great regret, they pump tens of thousands of litres of untreated sewage into the Mediterranean every day, they have to do something with the rest. Sadi said that the lakes are 11m (36ft) higher than the surrounding land, and only the earth walls around them hold the muck in.

In this single spot alone - and he said other parts of Gaza were as bad - the lakes were so big that if the dykes burst a tsunami of sewage 6m (20ft) or 7m (23ft) high would swamp an area inhabited by 10,000 people.

Sadi Ali worries that a stray bomb or missile could break a dyke. There is a £40m ($80m) plan, funded by international donors, for a proper sewage treatment system for north Gaza. Sadi Ali is trying to build it. But it is well behind schedule. The problem is the same one that dominates every part of life here - the conflict with Israel.

Restrictions imposed by the Israelis - which they say are vital to protect their own people - have slowed down, and sometimes completely stopped the import of raw materials for construction like cement and piping. Contractors have not been able to move freely. The latest problem is the lack of fuel.

Try building a sewage system in a war. Gaza has been battered by years of fighting.

When we set up the television camera near the sewage lakes a little barefoot boy, barely more than a toddler, came up and asked if we were going to attack the Israeli positions.

He might have been asking if it was going to rain.

For him, and several hundred thousand other Gazan children, explosions are part of the soundtrack of their lives. The boy must have assumed the camera and its tripod looked like a weapon.

After that we worked faster, in case the Israelis thought the same thing.
Powered by