The Israeli army intends to flood Gaza border areas with water in order to destroy underground tunnels built by the Palestinian resistance.

An Israeli military official told Maariv newspaper, on condition of anonymity, that the army plans to flood underground cross-border tunnels, as Egypt has done on its border with Gaza. 60 miles of land extending along the border of Gaza will be flooded with water, according to the official.

He added, according to the PNN, that the Israeli army would also finish, within a few months, the building of its underground concrete wall to block attacks from Gaza.
Army Invades Hebron, Searches Homes And Installs Roadblocks

Dozens of Israeli military vehicles and jeeps invaded, on Thursday, Hebron city and several nearby areas and towns, searched many homes and installed roadblocks.

Owners of some of the invaded homes have been identified as Yousef Abu Daoud, Hamza Abu Daoud, Roshdi Qneibi, Ali Olama’, in addition to al-Qasrawi and Edrees families.

In Beit Awwa town, west of Hebron, the soldiers invaded one home, belonging to Shehda Masalma.

In addition, the soldiers installed roadblocks leading to the towns of Ethna, Bani Neim and Beit Ummar, before stopping and searching dozens of cars while inspecting the ID cards of the passengers, and interrogated many of them.
Soldiers Install Surveillance Cameras East Of Bethlehem

Al-Badan added that the cameras were installed in an area that overlooks a main road used by the Palestinians, and by Israeli settlers, living in nearby illegal colonies.

It is worth mentioning that, several months ago, the army built a fortified military watchtower in the same area.
28 sept 2016
Euro-Med calls for action against Israeli campaign to evict international workers

Euro-Mediterranean Human Rights Monitor revealed in a new report issued Wednesday that Israel has adopted a systematic campaign to prevent activists and NGO workers from working in the Palestinian territories.

The international secretary of Euro-Med, Pam Bailey, is one of the victims of the surging number of deportations, and the NGO called on the council to file a formal complaint against Israel with international bodies.

“We are not individuals who want to live and work in Israel; rather, we seek the right to do so in the Palestinian territories,” notes Bailey.

“The Israeli government likes to claim it is not a prison warden. But what else is it if it controls who Palestinians choose to welcome as visitors and consultants?”

An analysis of UN data conducted by the Euro-Med Monitor shows that a recent surge in reports of deportations of individuals attempting to transit through Israel to work with Palestinians is apparently the result of an official strategy implemented by the Israeli government beginning in January of this year.

Reports submitted to the Access Coordination Unit (ACU) of the United Nations Office of the Resident and Humanitarian Coordinator show that in 2015, only 1 percent of the 384 “incidents” encountered by UN and international NGO employees and consultants resulted in deportations.

Rather, the vast majority of the problems (76 percent) were delays. The same pattern was observed in the previous three years. However, through September 20 of this year, “mere” delays (which can last hours) dropped to 58 percent of the 232 reported incidents; instead, there was a dramatic increase in forced cancellation of trips (18 percent) and deportations (9-10 percent).

By far the most incidents were reported at Erez, the crossing from Israel into Gaza, indicating that travelers to the blockaded Strip are particularly targeted. About 4 percent of UN employees were denied permits.
24 sept 2016
IOF recloses main entrance to Aynabous town

The Israeli occupation forces (IOF) closed once again the main entrance to Aynabous town, south of Nablus city, with a roadblock after local residents removed it.

Local sources told the Palestinian Information Center (PIC) that a military bulldozer escorted by Israeli soldiers re-placed the concrete blocks on Huwara road near the entrance to Aynabous and blocked internal roads connecting the town with other areas.

Local young men had opened the road last night after its closure for five days. The Israeli army has closed the main road to Aynabous and other nearby roads since last Sunday at the pretext of preventing stone-throwing attacks on settlers' cars.
Beita residents rally, pray at blocked entrance to their besieged town

Hundreds of Palestinians in Beita town, south of Nablus, rallied for the Friday prayer yesterday at the main entrance to their town, which has been closed by the Israeli army recently as a mass punitive measure against the local residents.

In a speech following the prayer, municipal chief of the town Wasef Ma'alla warned that the residents would not remain silent on the closure of the town and would take further protest steps as of next Monday if the Israeli army did not end its siege.

Ma'alla added that the residents would have to block the Huwara road, which is used by Jewish settlers, in response to the Israeli siege.

Since last Sunday, the Israeli army has been blocking the main entrance to Beita town as well as other vital roads leading to the towns of Odella, Aynabous and Burin at the pretext that Israeli cars were exposed to gunfire and stone-throwing attacks on Huwara road.

The army also tightened its siege on Beita town and closed all its subsidiary and dirt roads on Thursday evening.
Soldiers Close All Roads Leading To Nablus 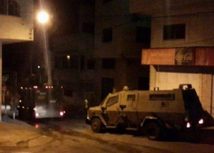 Israeli soldiers closed, on Friday evening, all roads leading to the northern West Bank city of Nablus, and prevented the Palestinians from crossing for several hours.

The soldiers installed many roadblocks, even closing minor roads leading to the city, completely sealing it, before stopping and searching dozens of cars, and interrogated many Palestinians while inspecting their ID cards.

The army claimed there was what it called “a security incident,” but did not provide any further information, and later removed the blockades.
23 sept 2016
100 Gazan businessmen kidnapped by Israeli army since 2015

Since the start of 2015, the Israeli occupation army has kidnapped over 100 businessmen during their travel through the Beit Hanoun (Erez) border crossing, north of the Gaza Strip, and revoked entry permits for about 40 percent of them.

According to al-Mizan Center for Human Rights, the Israeli army escalated lately its arrest of Gazan businessmen, although they already obtained travel permits.

The Israeli army also prevented, during the same period, 200 companies from conducting transactions overseas and banned the entry of many raw materials and needs used in manufacturing industry.
22 sept 2016
Israel to unblock Karem Abu Salem crossing

Director of the crossing Mounir al-Ghalban said the IOA informed him of their intent to reopen the crossing on Thursday after they had unexpectedly closed it on Wednesday.

He added that Israel has frequently closed the crossing without explaining the reasons for such arbitrary moves.

Speaking to the PIC reporter, Ghalban affirmed that the Israeli decision to close the crossing was without any prior notice or known reasons.

The Karam Abu Salem is the only commercial crossing operating in Gaza for the entry of goods, aid and fuel. It is regularly closed each Friday and Saturday and during the Jewish holidays.
17 sept 2016
IOA prevents 90 Palestinians from traveling

The Israeli Occupation Authorities (IOA) prevented over the past week 90 Palestinians from traveling via Karama border crossing that links between Jordan and occupied West Bank.

In a press statement, the PA police affirmed that Israeli forces denied the passage of 90 Palestinian travelers via Karama crossing under “security pretexts” without providing further explanation.

During the same reported period, 48,000 Palestinian travelers’ passage was allowed in both directions. 36 of them were arrested for being wanted to Palestinian police, the statement pointed out.

Last week, 53 Palestinians’ travel via Karama crossing was denied under the same pretexts. Karama crossing is the only land-passage available for the residents of the West Bank to travel to the outside world.

The Israeli Occupation Forces (IOF) tightened their military restrictions on Bani Naim town east of al-Khalil and closed all entrances leading to it.

According to the PIC reporter, Israeli forces closed Saturday morning all roads and entrances leading to the town, restricting the people’s movement in both directions.

Several local homes were also stormed while two residents were summoned for investigation, the sources added.

The military restrictions came as part of Israel’s collective punishment against the town after one of its inhabitants carried out Friday afternoon an alleged car-ramming attack near Kiryat Arba settlement.