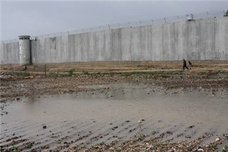 This Sunday, November 8th, marks the anniversary of the fall of the Berlin Wall. Ironically on this anniversary US taxpayer dollars are being used to assist Israel to construct a separation wall that is illegal under international law. To make matters worse the wall has not been on the long established 1967 "Green Line" but instead constructed on some of the best Palestinian agricultural lands some distance within the borders of the promised Palestinian state. This arbitrary location affects some 100-200,000 Palestinians who need to work the land and live in villages near the wall and it stands as a visual scar on the land that most security experts agree it will have no impact on the problem of suicide bombers.

The legal implications of the wall are detailed in the accompanying briefing paper, written by Zaha Hassan, J.D. and Steven Goldberg, J.D. of Portland Oregon, who are lawyers and members of the National Lawyers Guild, which can be found at www.nlg.org/news/articles/wall.htm. The paper lays out the international law implications of the wall and its connection to Israeli settlement activities, the humanitarian crisis caused by the wall, the breaches of obligations under US and International law including rights to food, to own property and for freedom of movement. We urge you to keep your readers informed about this wall that even has President Bush concerned. We also refer you to the website of the Campaign to End the Occupation for more information about the wall: www.endtheoccupation.org .

The briefing paper calls for the US to put pressure on its closest ally in the region and for the US Congress to enforce the provisions of the Foreign Assistance Act and the Arms Export Controls Act and more specifically the restrictions on the April 2003 loan guarantees passed by Congress for Israel. The briefing paper closes with a call for hearings in Congress to investigate violations of international humanitarian and human rights laws.

A resolution condemning the construction of the wall was passed at the 2003 National Lawyers Guild Convention held last month in Minneapolis, MN. The NLG has passed resolutions going back to the early 1950's sympathetic to the long term safety and security of both Israel and the Palestinians (see www.nlg.org).

At a time when a renewed peace movement in Israel has embraced the Geneva Accords created by representatives of the consistent 60-80% of the Israelis and Palestinians who back a just peace it is particularly of concern that the US is funding the construction of this illegal barrier.
Powered by