Head of the village council Ziyad Adili affirmed that Israeli bulldozers closed this morning the entrance to Osarin village with sand barriers.

He pointed out that the Israeli measure came as part of the IOF’s collective punishment policy imposed against the village following the popular anti-occupation events organized by its locals on weekly basis.

Israel imposes restrictions on Palestinian movement within the West Bank, by erecting dozens of military checkpoints throughout the West Bank.

Israel's policy results in real hardships and constant uncertainty in people's daily lives in terms of everyday tasks such as getting to work or school or visiting relatives.

It also reflects the view that freedom of movement is not an inalienable right but a privilege that Israel can choose to bestow or withhold.
24 feb 2017
Gaza: Shin Bet asks for cellphones in exchange for medical treatment

The Shin Bet, Israel’s internal intelligence, started recently to ask Gaza patients who need to enter the occupied Palestinian territories for medical treatment to hand over their cellphones during their interviews as a condition for allowing them in.

Two cancer patients from Gaza said Shin Bet officers asked them to return to Gaza after they said they had no cellphones and later after that they received notices confirming their requests for travel were rejected.

Physicians for Human Rights said that it was able to gather testimonies from several patients affirming that the Israeli army and the Shin Bet asked for cellphones to be handed in order to use them for intelligence-related purposes.

The human rights group accused Israel of exploiting the suffering of Gaza patients many times before, saying it was not the first time the Shin Bet tried to gather intelligence from cellphones of patients in exchange for medical treatment.
23 feb 2017
﻿Israel Denies Five EU Parliamentarians Entry To Gaza﻿ 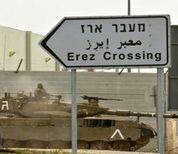 Israeli Walla News Agency quoted one of the parliamentarians, from Belgium, denouncing the order and stating, “this is inappropriate; I do not know what is it that Israel is trying to hide from us.”

Only one member of the European delegation, in charge of finances, was allowed to enter Gaza for a very brief time.

Commenting on the issue, an Israeli official stated that EU Parliamentarians “are not among the list of people who can enter Gaza.”

The officials first traveled to Israel, and headed to Gaza in an attempt to enter it through the Erez border terminal.
IOA withdraws travel permits of Jenin businessmen

The Israeli occupation authority (IOA) on Thursday withdrew commercial permits for travel to Israel from 110 Palestinian businessmen from Jenin province in the West Bank.

A citizen told the Palestinian Information Center (PIC) that he went in the morning to al-Jalama crossing in Jenin as usual where he saw an Israeli officer from the Israeli army’s civil administration taking away permits issued especially for commercial purposes from citizens on allegations they were not businessmen or merchants.

The citizen described the measure as part of the Israeli restrictions on the lives and livelihoods of the Palestinian families in the occupied West Bank.

In a related context, the Palestinian chamber of commerce in Jenin said the Israeli measure at the crossing today increased the number of businessmen whose commercial permits were withdrawn recently by Israel to 220 citizens from the province.
21 feb 2017
Israel stops pumping diesel and gasoline to Gaza

The Israeli authorities declared intention to stop pumping diesel and gasoline to Gaza via Karem Abu Salem commercial crossing under the pretext of undertaking maintenance work.

Speaking to Safa news agency, head of the crossing Mounir Ghalban affirmed that Israeli authorities stopped pumping diesel and gasoline to Gaza on Tuesday and Wednesday.

The move will not affect the cooking gas pumping or the goods’ entry into the Strip, he added.

Palestinian maintenance works have been declared in parallel with the Israeli operations.
19 feb 2017
Gaza: IOA revoked about 2,000 travel permits for businessmen

The Israeli occupation authority (IOA) canceled about 2,000 permits issued for the travel of Gazan merchants and businessmen through the Beit Hanoun (Erez) border crossing between January 2016 and February 2017.

According to the Palestinian chamber of commerce and industry in the Gaza Strip, the IOA has prevented about 200 companies in Gaza from being involved in foreign trade.

In a news conference on Saturday, senior official of the chamber Maher Attaba stated that these companies became unable to import products and raw materials from abroad and the production capacity of several factories sharply declined.

Attaba accused the IOA of seeking to tighten the blockade on Gaza and destroy its economy.
17 feb 2017
“Dismantle Ghettos” campaign kicks off in al-Khalil

A so-called “Dismantle the Ghettos” campaign kicked off in the southern occupied West Bank province of al-Khalil in an attempt to push for an international action as regards the Israeli crackdowns.

Palestinian activists and human rights advocates announced the launch of the campaign during a press conference held Friday at Cordoba School, in al-Shuhada Street, which has been closed off by the Israeli occupation army for years.

A series of events and rallies is expected to take palace both nationwide and overseas in the next few days so as to mobilize support for the campaign.

Campaigner Mufeed al-Sharbati said the move comes in response to the aggressions and violations increasingly committed by the Israeli forces and settlers against the Palestinians.

Activist Badi’ Dweik said the campaign aims to raise awareness about the daily violations against residents of al-Khalil at military checkpoints and security barriers set up by the Israeli occupation forces around the Ibrahimi Mosque, in al-Khalil.

The campaign is expected to be wrapped up by a mass rally on February 24 to push for lifting the Israeli cordons imposed around the Old City and other blockaded neighborhoods.

Member of al-Khalil defense committee, Hesham al-Sharbati, said 27 events will take place in the next few days in an attempt to shed light on Israel’s human rights violations and racist policies in the occupied territories.
Israel Soldiers Abduct A Palestinian At The Erez Terminal

Media sources in Gaza said the soldiers abducted Majdi Abu Taha, from Rafah, in the southern part of the Gaza Strip, while he was trying to cross the border terminal into Israel.

The sources added that Abu Taha carried a valid entry permit, but the soldiers cuffed and blindfolded him, and took him to an unknown destination, without providing any reasons for his arrest.

It is worth mentioning that the soldiers have recently abducted dozens of Palestinians, including many merchants, at the Erez terminal.
16 feb 2017
Egypt to open Rafah crossing on Saturday for the stranded

The spokesman of the Interior Ministry in Gaza Iyad al-Bezem said, in a statement posted on Facebook on Thursday, that the Egyptian authorities are going to open Rafah border crossing on Saturday.

The crossing will be opened in one direction only for the return of the stranded people in the Egyptian side into the Gaza Strip, he added.

Gaza’s Crossings and Borders Commission said 1,527 passengers gained access out of Gaza via the Rafah crossing over the past three days.

924 citizens were also allowed entry into the blockaded Gaza Strip, it added.

However, the Egyptian authorities prevented 113 passengers from passing through the Rafah border crossing.

Egypt unblocked the Rafah border crossing with Gaza as of Saturday on both sides, following Cairo talks between a Hamas delegation and Egyptian intelligence officials.
Israeli Soldiers Abduct A Palestinian In Hebron

Israeli soldiers invaded, on Tuesday at dawn, several communities in the southern West Bank district of Hebron, abducted one Palestinian, and installed many roadblocks.

The Hebron office of the Palestinian Prisoners Society (PPS) said several army vehicles invaded the Shiokh town, north of Hebron, and abducted Zaher Abdul-Rahim Halayqa, after searching his home and his brother’s home.

The PPS added that the soldiers installed roadblocks at the entrances of Sa’ir and Halhoul towns, in addition to Hebron’s northern road, before stopping and searching dozens of cars, while inspecting the ID cards of the passengers.
13 feb 2017
601 stranded passengers allowed access out of Gaza via Rafah crossing

601 stranded passengers have been allowed access out of the blockaded Gaza Strip via the Egyptian-controlled Rafah border crossing, a commission reported Monday.

The Commission of crossings and borders at the Gaza-based Palestinian Interior Ministry said 601 Palestinians gained access out of the crossing.

270 passengers were also allowed entry into Gaza via the Rafah crossing while 30 others were barred from passing through the passageway.