Local sources told the Palestinian Information Center (PIC) that Israeli soldiers aboard four patrol vehicles were stationed at the junction and embarked on intercepting passing vehicles and checking the IDs of Palestinian passengers.

They added that some citizens were detained for a while and exposed to interrogation by soldiers, while several cars were searched selectively.
2 apr 2017
IOF sets up roadblock west of Salfit

The Israeli occupation forces (IOF) on Sunday set up a makeshift checkpoint at the main entrance to Kifl Hares town, west of Salfit in the West Bank.

Eyewitnesses reported that Israeli soldiers at the roadblock searched passing vehicles and passengers and checked the IDs of young people in particular.

They added that the roadblock obstructed the movement of vehicles and prompted many drivers to take other routes.

Almost every day, the Israeli army places roadblocks and checkpoints in different areas of the West Bank, claiming they are installed for security reasons.
28 mar 2017
Israel delays cancer treatment for Gaza children 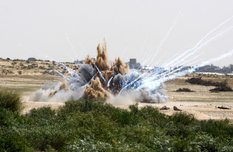 White phosphorous munitions are destroyed in the southern Gaza Strip during a controlled demolition in March 2010. There are concerns that such Israeli weaponry has contributed to a spike in cancer rates in the territory.

Jihad is a boy with ambitions. “I want to grow until I become an astronaut and an engineer,” the 9-year-old said. “At the same time.”

Before he could achieve those goals, Jihad would have to recover from a major illness. About a year ago, he was diagnosed with cancer of the colon.

The diagnosis was made after he had been taken to hospital with food poisoning.

For his family, the news was the latest in a series of tragedies. Jihad’s twin brother was born with severe disabilities and died after just two months.

“I was so happy when the doctor told me I was pregnant with twin boys,” Jihad’s mother, Majda Ali, said. “I started to dream about how I would be mother to a doctor and an engineer. The dream has been destroyed.”

Majda does not know the cause of Jihad’s cancer. She fears, however, that it may have something to do with how she was exposed to a considerable amount of dust from buildings bombed by Israel during Operation Cast Lead, the attack on Gaza in late 2008 and early 2009.

What she does know is that Jihad requires urgent treatment. He has been referred to specialists working in Jerusalem. It is not clear when – or even if – Israel will allow him to travel.

Cancer rates are increasing worldwide, particularly in developing countries, due to an increase in risk factors like smoking, adoption of Western diets and sedentary lifestyles, as well as environmental pressures.

But in Gaza, there are particular concerns that Israeli weaponry may be a contributing factor.

Israel is known to have experimented with a number of weapons during the 2008 offensive. They included a US-supplied “bunker buster” missile called GBU-39 and white phosphorous, a weapon that causes severe burns.

Suspicions have been raised that some of the missiles used by Israel were coated with depleted uranium, a radioactive substance.

Khaled Thabet, head of the oncology department at al-Shifa hospital in Gaza City, has said that Israel’s use of depleted uranium may be linked to increased levels of cancer.

It has been reported, too, that Israel has been spraying pesticides on farms in Gaza for a number of years. The use of toxic pesticides and fertilizers by farmers may also be contributing to the rise in cancer rates. Colon cancer may be caused by the presence of pollutants in food, according to Thabet.

“Many services necessary for cancer patients are lacking” in Gaza’s health system, Thabet told The Electronic Intifada. “Surgical facilities are one of them.”

More than 15 percent of all cancer patients requiring surgery are recommended to travel outside Gaza, according to Thabet. Referrals are made to hospitals in Israel, the occupied West Bank, Egypt and, in some cases, to Jordan and Turkey.

Israel frequently obstructs efforts to ensure that cancer patients receive the treatment they require. In some urgent cases, Israel has blocked patients from traveling for periods of three or four months, Thabet added.

Ahmad al-Tannani is ambitious, too. He wants to be a football star.
“When I am better, I’ll play football and train hard,” the 8-year-old said.
Ahmad, a resident of al-Bureij refugee camp in central Gaza, has lymphoma.

Having undergone an operation, he now requires a form of radiation treatment which is not available in Gaza. He could be treated in an Israeli hospital but has not yet been allowed to travel by the Israeli authorities.

Recently published data indicate that Israel has tightened its restrictions on travel from Gaza.

Gisha, an Israeli human rights group, has reported that there was a 44 percent drop in the number of people who exited Gaza, via the Erez military checkpoint, in January 2017, when compared to the same month last year. Erez separates Gaza from Israel.

Medical patients and people accompanying them were among the categories of travelers affected by the decrease, according to Gisha.

The World Health Organization has also reported [PDF] that Israel is allowing fewer Palestinians to travel for medical treatment.

In January last year, Israel approved 78 percent of all requests to travel for treatment made on behalf of people in Gaza. By December, that proportion had fallen [PDF] to less than 42 percent.

That was the lowest rate of approvals recorded since April 2009.

More than 1,400 patients were delayed from reaching healthcare appointments in December last year. According to the World Health Organization, that was the highest number of such delays ever recorded.

Among those affected were 323 children.

Maram Aqil is an 11-year-with lung cancer. She has been receiving chemotherapy in an Israeli hospital. Her parents hope that they are not hampered from traveling through Erez.

“Delaying the next dose of chemotherapy will kill Maram,” said her mother Najah. “That’s what the doctor told us.”

A resident of Jabaliya refugee camp in Gaza, Maram is an only child. “When Maram arrived, we thought we owned the whole universe,” Najah said. “But I think cancer will take away the delight we felt.”

One major obstacle encountered by patients with serious conditions and people accompanying them is that they have subjected them to interrogations to Israeli troops at Erez. Physicians for Human Rights-Israel has stated [PDF] “Israel is unethically and immorally exploiting the medical needs of Palestinian patients, making their transit for medical treatment conditional on [Israeli intelligence] questioning, in order to squeeze them for intel.”

In January this year, Nidal Elian brought his son, Muhammad, to the Erez crossing. Aged 6, Muhammad has lung cancer and requires urgent treatment.
The troops staffing the checkpoint tried to blackmail Nidal. They told him that they would allow him through Erez if he became an informer to the Israeli military. Nidal refused.

“I know that this refusal will cost me the life of my child,” said Nidal. “They will never allow me to pass now and they will not let my child complete his treatment. But I cannot sell my country to my enemy.”

Israeli Occupation Forces (IOF) on Sunday raided Joret al-Shama and Marah Mealla towns, south of Bethlehem. The IOF soldiers fired stun grenades at civilians in both towns with no arrests or injuries reported.

WAFA news agency quoted Hassan Braijeyeh, representative of the committee against the separation wall and settlement in Bethlehem, as saying that Israeli occupation authorities have completed construction works of the Separation Wall in the part close to Bethlehem Arab Society Hospital for Rehabilitation in Beit Jala town, west of Bethlehem governorate. It is a four-meter-high barbed wire, the agency elaborated.

Braijeyeh pointed out that completing the Separation Wall in Bethlehem means that the lands of Beir Ouneh and Wadi Ahmad areas northwest of Beit Jala are now completely isolated.

An Israeli court, he recalled, had issued a decision stipulating the suspension of construction works in the Separation Wall in that area.
13 mar 2017
Israel bans entry of Chair of Palestine Solidarity Campaign

The Israeli occupation authorities (IOA) banned the chairman of the Palestine Solidarity Campaign (PSC) from entering Israel, days after the Knesset passed a law to bar supporters of the boycott campaign.

PSC chair, Hugh Lanning, has been denied entry into Israel, raising the likelihood he is the first high profile figure to fall foul of the Knesset law.

Lanning was recently honored at the Palestinians Abroad Conference, held in Istanbul on February 25 and 26.

Analysts attributed the ban to PSC’s support for the BDS campaign.

Last week, the Israeli Parliament passed controversial legislation that would bar supporters of boycott campaigns as well as individuals who are part of boycott organizations from entering Israel.
12 mar 2017
IOF obstructs movement of citizens east of Qalqilya

The Israeli occupation forces (IOF) on Saturday evening obstructed the movement of Palestinian vehicles and passengers at the eastern entrance to Qalqilya city, north of the West Bank.

Local sources told the Palestinian Information Center (PIC) that Israeli soldiers set-up a roadblock at the eastern entrance to Qalqilya, intercepted and searched passing vehicles and checked the IDs of passengers.