Israeli occupation forces (IOF) served demolition notices to a number of citizens in Beit Ummar village, Al-Khalil, claiming that their houses were in proximity to the Quds-Khalil bypass road.

Local sources told the PIC that the troops allegedly wanted to prevent throwing stones at army vehicles and settlers' cars passing near the town.

Local sources said that the soldiers detained five citizens in the Bethlehem and Ramallah districts while one was detained at the Hawara checkpoint south of Nablus city alleging he was in possession of "combat means".

The soldiers arrested four other Palestinians in Al-Khalil city including two children the brothers Mahmoud and Suleiman Abu Ramuz, 14 and 15 years old respectively. 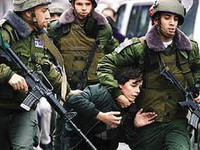 The four were identified as Suleiman and Labib Majed Al-Fakhouri, 20 and 23, Mahmud Sa`id Abu Ramuz, 14, and Wisam Ramadan Abu Ramuz, 15.

An Israeli military statement said five Palestinians had been detained overnight, without specifying where they were taken from.
6 mar 2011

The event was organized by minister of social affairs Majeda Al-Masri, a leader in the Democratic Front for the Liberation of Palestine, and union officials from Hebron and Ramallah in the occupied West Bank.

It was not clear how many people were hurt, but union official Nehad Al-Akhras said a Swedish activist was seriously injured by a stun grenade which struck her in the face. She was hospitalized in Ramallah.
5 mar 2011

According to Palestinian sources, victims included a Swedish woman from the ICM foundation, Taghreed Shalalida, an official at the Union of Women's Action Committees in Al-Khalil, and Maryam Ma'ali, an official for the same committee in Ramallah.

The marchers began waiving Palestinian flags and shouting calls for an end to the occupation in front of the Kalandia refugee camp between Jerusalem and Ramallah. They then advanced towards the Kalandia crossing, an Israeli military checkpoint where Palestinians with permits can leave Ramallah, when soldiers began firing rubber bullets injuring many.

Dr. Nihad al-Akhras, an official of the union of health care committees, has said that many female activists had been hospitalized in Ramallah. He added that some injuries were serious, as the Swedish activist, called inda, was instantly knocked unconscious after being hit in the face with a stun grenade.

Palestinian activist Nada Tawir said in statements she gave near the checkpoint that Palestinian women want an end to the national split for the sake of resistance and confrontation of all settlement projects that indiscriminately target all that is Palestinian. 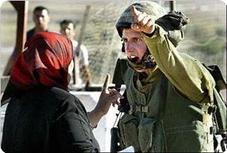 According to the woman's family, the Israeli army has arrested Amal Jamal Taqatiqa, 19, near the Etzion crossroads in eastern Beit Fajjar claiming she attempted to stab a soldier.

The family submitted reports confirming Taqatiqa's mental illness to the Israeli Bethlehem liaison office seeking her release. But authorities are keeping her in custody.
4 mar 2011

"Undercover soldiers deployed across the area but failed to arrest children" from the neighborhood, Seyam said.

He accused Israeli forces of using a new kind of tear gas that causes breathing problems to those who inhale it. 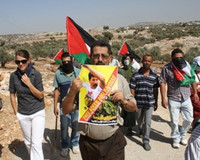 Ramallah PNN On Friday, three people were injured during anti-wall protests organized in the villages of Bil`in, Nil`in and al-Nabi Saleh, in the central West Bank as well as al-Ma`sara in the south. Many others were treated for the effects of tear gas inhalation.

In al-Nabi Saleh, three protesters were injured when troops attacked the weekly protest. Villagers were joined by international and Israeli settlers in a march toward lands confiscated by Israel for settlement construction.

The Israeli army sealed off the village and stopped the protesters from reaching the lands, and when protesters reached the soldiers stationed at the entrance, the soldiers fired tear gas directly at them.

In al-Ma`sara village, southern West Bank, the weekly protest march ended with no injuries as Israeli troops suppressed it within an hour.

In the central West Bank villages of Ni'lin of Bil'in, nonviolent resistance marches were organized and carried out on lands owned by local Palestinian villagers. Joined by international and Israeli supporters, protesters carrying Palestinian flags and banners marched toward stationed troops, who fired tear gas at them. No injuries were reported at either location.
3 mar 2011

Maysa Abu Ghazala Jerusalem PNN/Exclusive - At 14, Muhammad Imad al-Za`tari is not old enough, according to international law, to be treated as an adult. But in the eyes of the Israeli authorities, he is responsible for his actions and eligible for long and cruel imprisonment.

Muhammad was arrested on September 24, 2010 and accused of stabbing an Israeli settler in the al-Tur neighborhood of East Jerusalem on September 22, the day that a Palestinian man named Samer Sirhan was shot dead by an Israeli security guard in Silwan. At the time of his arrest, he was 14 years old.

Israeli troops raided his home at dawn on the 24th, inspected it thoroughly, and destroyed furniture. He was interrogated over a period of at least one week, in which no charge was formally leveled against him. Nothing was heard of him through the media. The Israeli interrogators, Muhammad recounts, insisted on him saying the word yes before they closed the assault file.

Muhammad was arrested once before, on February 8, 2010, during a wedding party for released prisoner Ahmed Abu al-Hawa. He was charged with assaulting an Israeli secret policeman and put under house arrest until his file expired. Then as now, the methods of the interrogators were to hear the word yes.

Muhammad explained the interrogation methods in an interview with PNN:

In the beginning the interrogators tried to scare me and said they had captured seven of my friends and that they said I stabbed [the settler], he said. The police also presented Muhammad with pictures of his father and brother and said they had arrested them, as well.

Muhammad continued, I stood there and the interrogator stood in front of me and he grabbed my wrist and threatened to take me to Ofer Military Prison to wash shoes and underwear.

Another interrogator put Muhammads head against the wall of the room and a third said, We ran a DNA test on the knife and it says it was you who did the stabbing.

There was no defined time for the interrogation, explained Muhammad, but sometimes they lasted for hours.
The taste of freedom was sweet and unexpected for both Muhammad and his family when a court date was set for March 2, 2011 after being postponed from February 21 and a judge exonerated him based on a discrepancy in eyewitness testimony as to the color and type of the knife allegedly involved in the stabbing.

We are trying to educate the new generation, explained Muhammads mother, who said she was afraid during Muhammads imprisonment, especially when he was in jail. Israel wants to bring it down.

An 11-year old boy arrested in east Jerusalem for throwing stones claims officers beat him while his hands were tied. Hospital tests confirm the boy sustained injuries to the eye, head, and stomach.

M. was arrested on Monday in the east Jerusalem neighborhood of Silwan. It was his fifth run-in with the law, and his two brothers were also arrested. The three were interrogated in the presence of their father, an imam and one of the leading figures in Silwan residents' protest against Israeli forces.

But during the interrogation M. complained he was not feeling well and was released home. Later that evening, he vomited blood and his parents took him to the hospital.

There, doctors found that the boy was suffering from a fractured bone in his eye cavity as well as head and stomach wounds.

Upon being discharged Thursday, M. told Ynet that officers disguised as Arabs (aka Mista'arvim) had tied his hands beat him. "After school I went to a friend's house," he recounted.

"Then five officers caught me I recognized them because they had pepper spray. After they tied me up they beat me in the stomach and head. They handed me to the police but I didn't feel well and vomited blood."

He added, "When they hit me I was afraid because all the kids ran away. I started crying and told the Mista'arvim: 'I'm a little boy and I didn't do anything, leave me alone'." Now, he says, he is no longer afraid, but his eye still hurts.

M.'s father, against whom a restraining order from Silwan is in effect, believes his son suffered for his reputation. "I'm afraid because I feel I cannot protect him from the police," he said. "I have been arrested in the past but that's no reason to hit my boy."

The father added that his son had not been throwing stones on the day he was beaten. "The officers that beat him have no brains and no limits. They say Israel is democratic, but law and democracy don't protect us," he said.

M.'s mother says he has nightmares "that police knock on our door and take the children away".

'Police violent towards kids'
According to data collected by ACRI, 1,267 cases were opened between November 2009 and October 2010 in which Palestinian minors were accused of throwing stones. The organization claims that police have adopted a routine of arresting children in the middle of the night as a scare tactic.

Jerusalem Police stated in response, "The minor was caught red-handed throwing stones, and was interrogated in the presence of his father. During the interrogation he felt poorly and was released to receive medical treatment."
28 febr 2011

Israeli occupation police rounded up nine Palestinian boys in Silwan and Ras Al-Amud in occupied Jerusalem on Monday including a 7-year-old child.

Local sources said that Israeli border policemen accompanied by special units stormed the Old City and broke into many houses and wreaked havoc in them.

They said that Khalil Al-Resheq, 7, was among the detainees along with 11-year-old Muslim Odeh and 14-year-old Ahmed Abu Madi while the others were 16 years old and one 19-year-old.

* Making it difficult for the childrens lawyers, including lawyers from DCI-Palestine, to visit their clients and provide legal assistance.

1. An immediate end to the practice of detaining Palestinian children inside Israel in contravention of Article 76 of the Fourth Geneva Convention.

2. Ensuring that all Palestinian child detainees are held in separate facilities from adults and in conditions that meet international standards.

3. Ensure that all Palestinian child detainees held in Israeli detention facilities receive at least one family visit per week.

Israeli police forces stormed a number of suburbs in occupied Jerusalem at a late hour on Saturday night and engaged in clashes with Jerusalemite youths until dawn Sunday, locals reported.

They said that the clashes started after the forces stormed the suburbs of Bustan, Wadi Hilwa, and Silwan Daraj while firing at the young men injuring five Jerusalemites.

Wadi Hilwa information center said that among the injured were two 15-year-old boys.

Silwan town, south of the Aqsa Mosque, is witnessing escalating attacks on the part of Israeli police forces and Jewish settlers.
26 febr 2011

Local sources said that the confrontations in the suburb expanded to nearby neighborhoods, which are witnessing daily violent clashes between citizens and those forces.

Citizens noted that the police forces used tear gas bombs in an unprecedented manner, which caused breathing difficulty among a big number of civilians including tens of children.

Medical sources said that a young man was hit with a rubber bullet in his spinal cord, describing his condition as "serious".