31 dec 2007
Alternate Focus presents a video from the organization "If Americans Knew". www.ifamericansknew.org

Part 1 features four segments. In "The Easiest Targets" five women -- Palestinian, American, Muslim, Christian and Jewish -- tell stories of humiliation and harassment by Israeli border guards and airport security officials. The next segment examines how the Associated Press allegedly erased footage of an Israeli soldier shooting a Palestinian boy. Third, "Jeffrey Goldberg: Pundit for Israel" shines light on the writer and TV commentator's past as a guard at Israel's notorious Ketziot prison. The last segment features a 3 minute version of the Alternate Focus program "Off the Charts: Media Analysis of the Israel-Palestine Conflict".

Part 2 contains an additional four segments. The 15 minute video "Captured Prisoners" features testimony from former inmates and outside observers about Palestinian's minimal legal rights and the brutal conditions inside Israeli prisons. The next segment explores "Gaza After Disengagement". The third segment offers interviews with American politicians, diplomats, and journalists about the Israel-Palestine conflict. The program concludes with a three minute version of the Alternate Focus show "Divesting From Violence: Presbyterian Policy in the Middle East".

Alternate Focus is a 501(c)(3) non-profit educational media group promoting an alternative view of Middle East issues. We use the web, cable and satellite television, and DVDs to showcase media not usually seen by American audiences.

Alternate Focus is available on the Dish Network, Free Speech TV, Channel 9415, Saturdays at 8:00pm EST and on cable stations near you. Check www.alternatefocus.org for details.
15 aug 2007 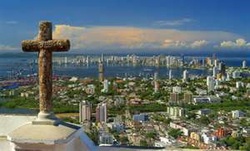 Colombia recently admitted that it had hired four retired Israeli military intelligence experts (three of them generals) to advise their own military intelligence officers, on how best to find and use information on leftist rebels and drug gangs. Israel has developed a very effective intelligence operation back home, which played a major role in ending Palestinian terrorist bombings inside Israel.

Meanwhile, the leftist rebels in Colombia are complaining there are also Israeli advisors in the field. Apparently, former Israeli army troops, with counter-terror experience, are aiding Colombian army and police units in the field. This is nothing new, and has never been much of a secret, at least in Colombia. For one thing, Israel has sold over a hundred million dollars worth of military equipment to Colombia in the past few years. The gear and weapons often comes with technical experts, often former Israeli military, to show how to get the most out of the stuff.

Israelis have been popular in Colombia for years as bodyguards and security experts. But the leftist rebels and drug gangs have also established Israeli connections. Earlier this year, the government issued international arrest warrants for three Israeli men who had provided special operations training for drug gang killers. The three Israelis apparently had counter-terrorism training themselves, and are selling it on the international market to whoever can pay. The drug gangs need trained assassins to remove rivals and government officials that get in the way.

Back in 2000, police arrested two Israelis and a Colombian for attempting to smuggle 50,000 weapons into the country for left wing rebels. Between then and now, the government got after Israel to keep Israelis from aiding rebels and drug gangs. Israel apparently did what it could, including passing on intel about Israeli gunrunners believed to be operating in Colombia.